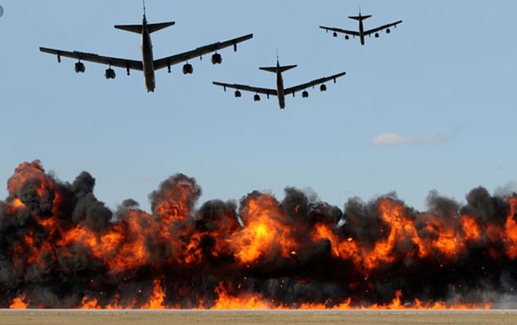 Who needs tactical precision when you can just blow up all the things and achieve better results? This build attempts to cram as many bombardment type spells/procs as reasonably possible to devastating(!) effect.

This build would not have been possible in earlier versions of the game when Blazeseer still converted fire to chaos. Reversing the conversion made all the difference. This build features 5 bombardment type spell/procs in total. 3 permanent bombardments from Blazeseer’s Rain of Fire, Ulzuin’s Torch devotion and Mortar Traps. 2 very strong bombardments on a CD in Devastation and Apocalypse.

Stats
All perm buffs up 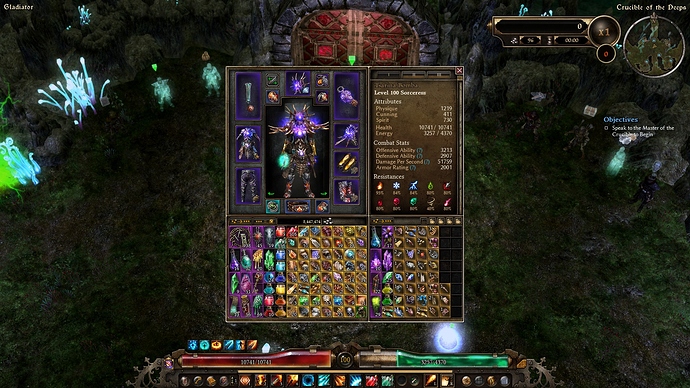 Gear
Let me preface by saying that in pursuit of the carpet bomb theme, this build contains less than ideal items. Notably, getting rid of the Blazeseer set and Herald of the Apocalypse will result in a better stat spread but lose the bombing theme. I am not looking to make Just another Pyran mortar build™. I already made the hard choice to omit Outcast’s Secret in favor of the Pyran helm for the completion bonus.

Having said that, I will mention the items that benefit this build at the cost of its theme. Pyran set and gloves are core to the build.

Significant alternative choices:
Amulet: Conduit of Destructive Whispers
Putting this out right now. The resists on Herald of the Apocalypse is garbage. The skill mod for Devastation would have been nice if we didn’t already have full 100% aether to fire conversion from the set bonus. As it is, the extra fire damage on the skill mod is just meh. The ONLY reason I’m getting Herald is for the Apocalypse skill.

The resists, extra health and +1 to demo skills on the conduit would make this an insta pick in any other circumstance. You have the choice of +1 summon mortar or vindictive flame +100% health regen for the suffix. Typical offense vs defense trade-off.

You can make the argument that the extra mortar trap summon marginally helps the bombardment theme so there you go.

If there was one item I would strongly replace on this build, it would be this one.

Boots: Lots of choices you can make
If you took Conduit of Destructive Whispers with pierce resist, you just fixed the biggest hole in this build. Even with Golemborn’s +50% pierce res, the build just barely manages to cap the resist. Once that’s fixed, your options for this slot widens a lot.

Weapon: Mythical Anderos’ Amplifier
Makes for faster placement and stronger traps. As this is not a dedicated mortar build, I opted for the +1 to skills and RR from Warpfire.

Belt: Mythical Ulzuin’s Torment
I am loathe to give up Blazeseer as you can essentially get permanent Rain of Fire proc with all the damage you’re throwing around. If you do give up the set, this belt is taken as its +1 to demo is more valuable than +1 to arcanist.

Medal: Mythical Mark of Calamitous Desires
And now we’ve gone full on Just another Pyran mortar build™. I can’t deny the stat goodness on this one though. If you give up Blazeseer, this is an insta pick.

Relic: Annihilation
Its now a proc so its worth considering. Its just 1 giant rock every 2.5s though and we’re already spamming so many other rocks from space. From the numbers, 2 hits from Rain of Fire = 1 Annihilation meteor. The hit from losing Serenity’s resistances and +skills to arcanist is a bit hard to compensate.

Relic: Eternity
I still prefer Serenity but this relic deserves serious consideration. This build has 4 very important skills on fairly long CDs in Devastation, Apocalypse, Mirror and Nullification. Making those skills available as often as possible makes this a strong pick.

Pants and rings you can mix and match how you like it.

Skills
Mortar Trap, Devastation, Thermite Mines and all the passive buffs are core. BWC was taken for its debuffs. This build has an anemic amount of phys res and BWC’s high potency helps with that. We rely on Devastation’s improved flat RR and when that’s not up, 1pt in Agonizing Flames is for the extra RR coverage.

You always come with good constructive feedback, can you say why you do not think so and present alternatives?

I’d like know which alternative is better for this build too. I might have missed something from all the choices the game offers.

I get what you’re saying about that mace following the build’s theme. However, I checked the proc on that thing and its just too weak to justify putting it in the build. The stats on mace are also not enough to compensate for the weak proc. I liked that you were trying to follow the theme of the build though.

Just comparing it to Apocalypse from Herald of the Apocalypse. The granted skill is stronger than 26/16 Devastation without any skill mods. When you consider that Devastation is already one of the strongest skills in the game and an item skill surpasses even that, its easier to justify including it despite the incredibly crappy stats on it.

Now if only CDR affected item skills, I’d be looking at an Apocalypse every 10s instead of every 15s…

Thanks! I already had this build in 1.1.3.0 with the Blazeseer changes but I decided to wait and see what the changes were in 1.1.4.0. Hence the reason I was able to post this build a day after the patch dropped.

Love your build on the cold DW sabo btw. I pulled out my sabo from her 2 year retirement to great effect with that.

Warpfire is +1 to all skilks. That’s huge tho.

The proc is not that strong and the stat loss switching from Serenity is big. I put this under alternate choices but personally, I’m not slotting it in. There comes a point when following the theme with a single-minded approach breaks the entire build. If Annihilation was a bombardment proc and not just a single rock every 2.5s, I would strongly consider it.

Sorry my rig is just not good for videos. I play on a laptop.

With all passive buffs active, this build already has more or less +2300% to fire damage. An extra +135% to fire with 12/12 Reckless Power won’t move the needle much. It is an increase of around 6% to overall damage. The rest of the bonuses on the skills are not significant to the build.

This one relies on several skills (Mortar, BWC, Devastation, etc) with a CD of 5s or more. 11% CDR to get those skills out more often is more valuable. Ignore the rest of the stats on Star Pact and just focus on the CDR.

Just noticed this build…this actually was the one thing I tested back before the new sets we’re launched (didn’t have much free time then… even that was only like for a hour or two) I’m a big fan of theme builds, especially when they produce results. Good job getting blazeseer to work with pyrans! I’m sure the devastation buffs made this much better than when I tested it

hi there,
what order did you do you devotion tree?
any help would be great

The meteor mage: turning a concept into reality (crowdsourcing a build)