Hello, I want to make little presentation how powerful warlord in SR is (especially if you farm for some rares to cover resistances). I don’t consider this guide because we have enough of it but some small group of people who likes tanks like me may like it - devotion route and not using stoneguard set made good job here.

Iron maiden’s shoulderguard became good choice after new patch because buffs to rares (especially +phys resistances on every nemesis shoulders) but it can be changed for Dawnguard epaulets with basically same effect.

I went without stoneguard set because we need +max resistances after 105 shard, stacking armor into the air is not so good because main threat is from everyone but no hard meele hitters. In 115 video I had even -20% armor mutator and it wasn’t a problem. With this scaling armor will matter maybe after 125? - but it’s not realistic to go so high so better to focus on maximum resistances. Next advantage is that you can use some gear swapping for belt - altough I didn’t do it because this setup is made allround already. Tested only White Lotus vs Kaisan but he is alt + f4 after 110 so no point to do it.

Example video with 3 decent bosses + 1 hard (Moosilauke) I am noob at recording (that’s my first video) so no sound, put some music you like or something if you want to watch it, I suggest 2x speed too, 115 shard is not really dynamic.

RNG starts to matter a little after 105, after 110 I needed really good run, had to restart few times because of Kaisan or Kubacabra going as first boss.

If you want to follow build I suggest to farm good rares, rings drop during ugdenblooms runs in act 5 and shield can be farmed from MI vendor in Steelcap district, only Overlord prefix should be enough. Some greenless build for 75-76 farm as bonus:
https://www.grimtools.com/calc/xZyn8AeN

Some bonus for our immortality presentation:

Crate can be killed even in 2-3 min but RNG is needed because his suicide boxes which SOMETIMES can kill us, sadly I didn’t record this attempt and couldn’t do it again so a little bit tryharding here.

Pure facetank kill with Vire devotion instead of Empyrion:

115 in SR, something for the gourmets!

I am always amazed by the necessary patience to get that deep. Assume that new waystones helps with this task.

Patience is definitely needed, I couldn’t handle more than one fail run per day, fun started after 110. Wanted to go for 120 (it’s realistic) but rng matters here too hard already and I need some break from this snail-fiesta.

Which enemies you find tough from 100 up? Shattered enemies, especially Anasteria or Nemesis? I haven’t played 85+ but maybe because I got infuriated with deaths and leave SR run for good

So:
Kaisan - around 105 shard he can be kited if pulled as last but later he is run-screwer because of his crystals and some kind of retaliation (?), white lotus belt can’t help here.

Zantarin - his skeletons hits hard, whole fight is basically charge with vire and mobility rune through them and hitting him for few seconds before he spawn next wave.

Moosilauke - he can one shot near the crystals, that’s why I was kiting him so carefuly in the video.

Alexander - must be kited from his crystals too because some strange one shots after 110.

Kubacabra - so defensive setup can’t kill him after 110 so it’s alt + f4 or going all points into cunning + assassin’s mark instead of ghoul or something, then it’s possible to kite him.

Theodin Maurin - boss who forced me to go for 3.6k DA

Basically it, Anasteria is not so hard but fight is long and must be played carefully, Grava’thul is one of the easiest bosses too even on smaller map if you know his nullify range.

I got beef with Maggots mostly. After 95 each one of them hits like a nemesis. And the new 3 Loghorreans stage where the new purple mobs spawn.

Imo the “sane” SR range is 75-80 for average builds and 80-90 for the tankier ones. Below that it’s too easy. After that it’s too unbalanced - just freaking RNG and praying for no one-shots or alt+f4 situations. 100+ is pets and mega tanks only, and Kuba is usually alt+f4. Unbalanced af. Enemies should never be immortal no matter the scaling.

SR could’ve been so great. It’s still a mess, imo.

This is interesting to see.

Your list of worst enemies is pretty different from my pet build experience.

Congratulations! share for 115.
indeed as u said if nemesis combination is not very powerful will little easy for deep
and I’d like to share my friend Retal Walord vedio to exchange experience
SR 111 - 1
SR 111 - 2 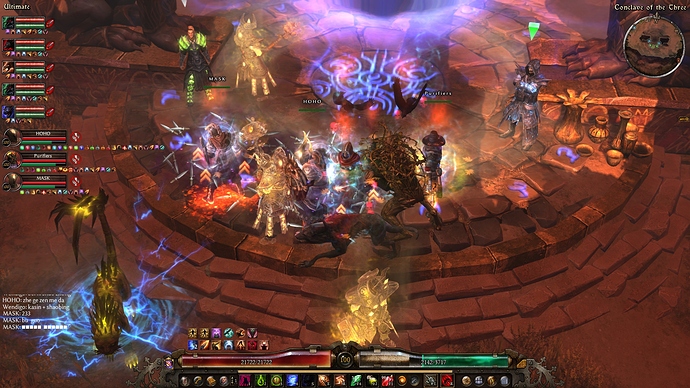 @ya1 I agree with your “sane” range opinion, every archetype should be considered more inividually, but thats normal for infinite scaling mode. It’s impossible to full balance it but some enemies should be toned down in realms. Like Kuba because not he is hard but he heals too much and Kaisan - his crystals range is simply too high, like 1/3 of conclave boss room?? Either he has one of the longest vision range so kiting him is just impossible if he is not pulled as last boss. Destroying his crystals doesn’t work, they are too tanky and they can kill you very fast so no point to even target them. Personally I like SR in current state, I threat it more like personal challenge so I don’t mind rng, I can fish for good runs with new waystones till I make my goal.

Range characters struggle with some other bosses than melee but still Kaisan is hell. I forgot about Gargaban too, for this retal I would put him in “moosilauke tier”, tactic is the same - bait his volcano, kite him away, charge him with cooldowns off, kill his plants during midfight if possible, they hit harder than him. Either Gazer “superboss” (similar to Zantarin) and Seeker (longer than whole boss room and 2 other chunks ffs). I didn’t fight 3x Loggy here so I don’t know about him, he seems has some low spawn chance for me.

@Duskdeep86 thank you, I’m viewier of your friend’s channel, was testing some of his devotion ideas too

I think he can reach 115 easier if going for Light of Empyrion instead of Vire and investing into DA more, after 110 there are too many one shots and overall damage reduction > only physical during War cry window. Pulling bosses with camera can help with some rng boss rush too (I’m doing it in video, after boss position “spread buff” it became almost necessary in highest levels to “cheat” rng…) but it’s personal preference, not everyone like this trick. Personally I don’t like it only in 75-76 builds, good farmer should be able to fight all bosses or at least 2 of them.

Added crate boss video and short description and maggots for fun, everything in OP

@adoomgod 2x freeze resistances or 1x freeze resistance (high roll) + increses armor should be okay. It’s important to have very high freeze res because Moosilauke is one of the hardest bosses high sr and some gameplay mistake + being freezed longer can kill us.

@klasperstanze Yes, you can overcap physical resistances if you have item with +maximum ALL resistances.

Thanks. This build is perfect for my four horsemen of the apocalypse. Your build plus the SR sorcerer canister bomb + ghol ritualist + a support deceiver are going to be my group attempt at deep SR dives.

That’s very nice to hear that my two builds will be used in your team! Good luck and I am waiting for the results.

Edit: I think you can be interested in this retal setup too:
https://www.grimtools.com/calc/0V0X3AXV

Thanks, more offensive setup might work well since kill times can help take pressure off the team.

As I understand correct, you use 100% shield block + procs and lifesteal to recover health bar so fast?

I seen your videos in SR, but what you do, if all 4 nemesis agro on you? in SR over 100? Just quit and re-made again? Or there is a way to split them?

I reached by my Retaliation Commando SR94 but was forced to quit, when all 4 foes attacked me, too much damage and resist reduction, not shure if I have a chance to beat all 4…