a small disclaimer: I think my time with GD is slowly going to its end so I’ll probably update this build and post or update some others and quit. Or maybe I’ll dwell here for another test patch to come, who knows.

1.1.9.7 UPDATE: the previous build info was wiped out as mostly irrelevant now and not suiting the guide format I’m following lately. So as the patch brought significant direct and indirect buffs to the build, it became quite strong. 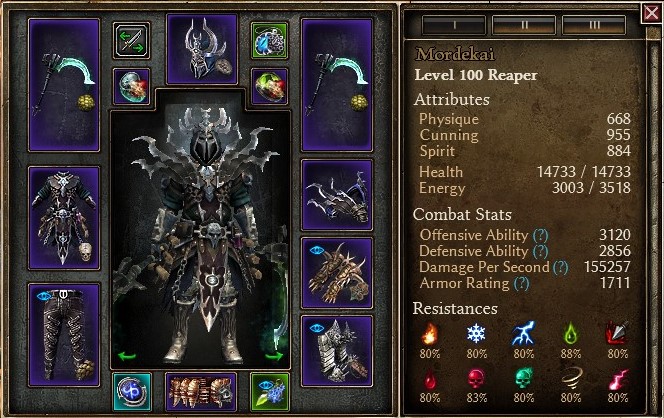 Meditation relic and maxed RE with the green RE medal will probably give you some solid returns.

and losing resists and +1 to all skills strikes me right in my heart!

Haven’t played Deathguard in ages. Now I have to try it with different class combo.

I haven’t played it for ages too, before recent days

Afaik, oppressor is a decent build.
But as the last SS on it I remember only mad_lee’s dervish and it failed absolutely.

But as the last SS on it I remember only mad_lee’s dervish and it failed absolutely.

Yeah, build had really nice numbers on paper but was an absolute pain to play.

Meditation relic and maxed RE with the green RE medal will probably give you some solid returns.

Tried that on oppressor. Made a post on it and two more chars.
Will definitely take this baby to a spin soon

So you are rotating skills not using AA? Always interesting to see such builds. But the dmg output suffers a lot if you don’t have skillpoints to max them.

Here is a variant with fewer skills: https://www.grimtools.com/calc/eVLm0yMZ
Imo Nightfall is definitely worth maxing, you have too many conversions for it to skip. You can get rid of Ring of Steel and 7 ranks in RE with very little losses and invest in Nightfall, you’ll feel the difference right away.

Also here is a cheap way into AA-caster hybrid: https://www.grimtools.com/calc/d2jxl7mZ
WPS is very cheap dmg here, even if it applies to the basic attack. Worth trying.

Much disapoint that the character name is not Mortarion 0/10

I think if a filler spell is going to be added it should just be biting blades. It slots in perfectly here.

So you are rotating skills not using AA?

mostly yes. as BH has low CD and I have to push 4 buttons in 1,5 secs, I decided to get rid of WPS.
I used them in very first setup but haven’t seen any solid contribution.
Your setups truly have more damage but seem too glassy for me

and even no RoS and fumble!

Fumble on RoS is way overrated. It’s a small chance to apply a 50% miss to the targets in a small area every 3 secs. It’s too unreliable. And melee hits arent the biggest threat in Cruci. Definitely not worth to keep in rotation just for fumble.

About WPS you are probably right, its more authentic to keep it without basic attack. Do consider ditching RoS and RE ranks for Nightfall hardcap. Should improve the timer nicely.

Fumble on RoS is way overrated. It’s a small chance to apply a 50% miss to the targets in a small area every 3 secs. It’s too unreliable. And melee hits arent the biggest threat in Cruci. Definitely not worth to keep in rotation just for fumble.

Dunno how i really feel about this. Vs big clusters of mobs it probably aint really worth, but vs 4 nemesis, each getting a chance to miss, sounds good to me.

sounds good to me

Let’s look closely on that. We pay 5 skillpoints for a skill with low dmg (including it in rotation is 100% a damage loss) and get 28% chance to make the targets miss 50%.

In the ideal situation, which is rarely the case with that AoE, you hit all the nems and make them miss 14% of their melee hits on average. Melee hits are like 30% dmg of bosses. So in the end you are mitigating 4% of dmg on average - and this excludes basically all the dangerous dmg spikes like shotguns and meteors. And you lose dps. And you lose 5 skillpoints.

Sounds bad to me.

Nice statistics, but thats on paper most of the time… Its like, will of fallen kings rune being better than astral rifts on my binder but the practice prooved the otherwise. Dunno i guess its a matter of worth the risk or not.

No points left for Ill Omen to gain some (more) Damage Reduction than from Black Blood?

it can be taken with some points out of Dread/Merciless Repertoire but the build is really sturdy even w/o Omen. probably Scales do their job perfectly.

Okay, no need to press another button if not necessary.