I don’t know. I am always short on iron and i am on lvl 69 now. But i always try to buy any blueprint i come across, maybe that’s what keep me short.

Hi there, I’m fairly new to the game. How are you unlocking guardians after only 20 waves of crucible? They’re right at the end of the Oathkeeper mastery. I’m confused xD

Complete 10 waves. Get reward. You should be level 8-10 depending on whether you used a potion of clarity. Complete another 10 waves and get the reward. Now you are level 10-12. If you didn’t use a potion and didn’t have a merit token (which adds extra skill points), you will need to be level 12 to unlock the guardians, so you might have to do another 10 waves in your case. If you did have a merit token and used a clarity potion, you will be able to unlock them at after 2 crucible runs of 10 waves.

Sorry for newbie question.
Now I am Lv40 and have already side with Order of Death Vigil however No boss shown up in the end of tomb of the Archon. How come? what i did worng? please advise.

Hi, all! i am at level 95, and need Condit of Night Whispers with blade spirit, i have mats, Can anybody craft for me, or exchange it? THX

Just playing in SC if you good for you my host is: Cserebere/Cserebere

Now I am Lv40 and have already side with Order of Death Vigil however No boss shown up in the end of tomb of the Archon. How come? what i did worng? please advise.

You need to complete a few quests with them to get the option to talk to another NPC inside Sorrow Bastion. She will ask you to retrieve an item from the Tomb of Archon Barthollem.

Just playing in SC if you good for you my host is: Cserebere/Cserebere

Heh, @GDStash is a joke referring to the tool to craft whatever you want and import it into the game. Join the CULT OF THE STASH today!

[GDS_Banner] Infinite stash tool for Grim Dawn. GD Stash is written in Java and stores all items in a database, so it truly is unlimited. It also reads the information from database.arz into its own tables, so it does not always have to decode them after the initial setup.

I did this and also got some resist gear from another character i had and things now r significantly better…ranged mobs r still problematic but nowhere near what i was suffering before…actually since i am trying to avoid combat and let my pets do the work i am thinking of taking points out of eye of reckoning/soul fire and investing in the phantasmal blades line…having a ranged attack can be safer and still enable me to join the battle…how would u rate that? i am not not an expert and never even used that skill before do u think this might downgrade the build somehow?

I have seen others use PB instead of EoR with this build quite successfully. Not sure how it will fair in the end as I haven’t tried it myself, but if you feel safer, - go for it. Damage is never a problem with this build. The reason I’m using EoR is that it synergizes well with this setup due to conversions, adds quite a bit of damage and some damage reduction from soulfire.

really looking forward to how this shapes up in the end…i am considering switching from eye of reckoning to phantasmal blades but confused about best point allocation and devotions…how is ur build evolving?

Oh thank you very much.

Still bashing away at this concept. I am not an expert theory crafter, but I do enjoy playing around with alternatives to the different class builds out there. The RNG gave me the fire items for the gavel and helmet from my lvl 100 farmer, so I just went with those with an existing dervish. I am currently at level 91 in ultimate and am crushing all I encounter (barring the embarrassing beating I got from the priest in steps of torment, but that was just stupidity on my part that won’t happen again - too Cocky with a fire resistant enemy).

The “Living Shadows” to me seem to be an asset to the build as I can have 3 of them up almost permanently when linked to PB. As I said, I am no expert builder, but my theory is that the belt “Cinderplate Girdle” converts the Shadows piercing damage to fire?

Shoot me down in flames if that is incorrect, but they are definitely the FIRST pets that spawn right at the targeted enemies of PB, even before the Guardians, Blades and Kitty have even thought about attacking them and even before I have used my “Pet Attack” key. Visually they appear to be hitting with fire damage, either way they are fast, hard hitting, aggressive and are my elite Ninja fast attack squad.

The devotion using Seekers may be better later with fire boosts, I dunno yet, but it is really fun to see 3 “Living Shadows” charge into the battle and get reinforced by the Immortal Army.

I really like @Contragor suggested use of the Justice set and have equipped it as I already had BOTH versions of that in my stash. I will stick with it and equip the lvl 94 version when I reach that level.
(I knew that there was gonna be some sort of use for that set somewhere

That makes sense, I don’t have either of those

This makes more sense to me now. Thank you

please remember to post ur final setup when u r done or close to it (94?) i am very interested in finding out how this version will look like in the end

Will do, I still have yet to come across the amulet item or blueprint for “Conduit of Night Whispers”, but hopefully it will drop somewhere from my lvl 100 farmer on one of her runs

Both Krieg and Cronley were a joke in Ultimate with this build - even with the sub-level equipment (80+)
I currently have at lvl 91. I have all the other equipment waiting for lvl 94 (bar the elusive amulet

I would like to post some short video dumps of Krieg and Cronley showing how the Living Shadows proc and attack, but have no idea how to do this?

I will obviously Google this, but I know a lot of you guys have done this on the forum as well as YouTube and if if there is a nice simple uncomplicated solution I would love to hear it.

EDIT - Oh WOW, it is a “Rabbit Hole”! - As usual, so many options with so many different features out there.

I just want a SIMPLE - START and END record of a game session. I am not interested in voice over commentary or showing my image live in a box at the bottom.

A small KISS solution suggestion would be ideal.

showing how the Living Shadows proc and atta

If you have an Nvidia graphics card, I suggest using GeForce Experience -> ShadowPlay. Basically, once you install Geforce Experience and launch the game, the recording functionality is available via Alt+F9 (start and stop recording). The video files are usually saved in the video\Grim Dawn\ folder on your primary drive. Hope this helps

That is a REALLY nice feature of Nvidia. Unfortunately I have a Radeon card. It may have a similar feature as both companies normally strive to be on a par with each other. I have not come across it, but worth a Google.

it’s build right into the driver 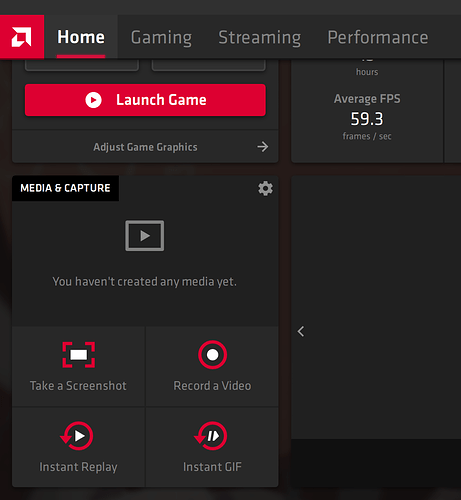