The idea behind this build is to combine Olexra’s Flash Freeze fire RR using The Mageslayer set with fire Albrecht’s Aether Ray. Build is also using Star Pact, Aeon’s Hourglass, Aldanar’s Vanity and Eternity for massive CDR. It is extremely funny build with nice DPS, huge fire RR and OK life sustain from devotions. Freeze a nemesis and fry it with a laser

Demolitionist is used because of its elemental RR, OA, DA, total speed, DA reduction, Blast Shield, health regeneration and because of bonuses from necessary items.

Build needs two monster infrequent items - Chains of Ygraad and Alexander’s Legguards. Ideally you want affixes that give bonuses to OA, DA and fire damage. Crafting bonuses are to physique on both helm and dagger. You could make them for stun resistance instead but enemies are frozen most of the time so it is not that needed.

version before improvements with only one MI https://www.grimtools.com/calc/vNQk0QRV

OK crit damage for a Sorcerer 40 %

lower life around 11 000 HP - managable with other defenses

freezing even nemesis with OFF (because of full Mageslayer set)

55 OA reduction to enemies from Annihilation

fumble and impaired aim from Flashbang

Build is capable of doing SR 65-66 and a skilled pilot can go higher with it. But be aware of a mutator that increases enemy’s CC resistances in SR (with that mutator fights with Mad Queen, Grava and Gargabol are like cat and mouse because you can’t freeze them - without that mutator you can freeze them and they are OK). Build is not a total tank but can tank for a while. Freezing nemesis extremely helps and is a fun

Be careful around heavy physical damage bosses. You can’t tank everything everytime but if you reposition yourself carefully using Displacement and you know the bosses you can beat SR 65-66 relatively easily. I don’t push my builds higher than SR 65-66. I don’t have a time number for Crucible because I don’t play it. 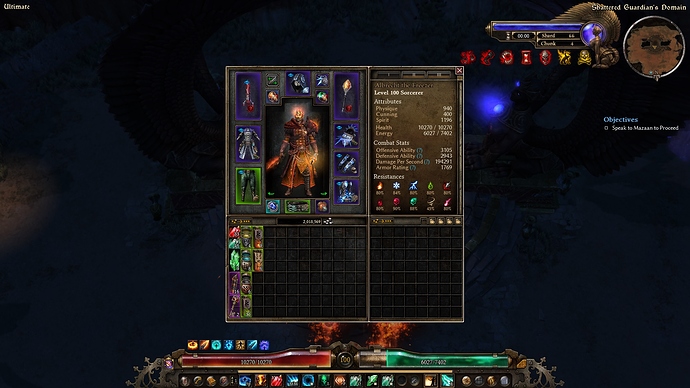 How high do you reckon it could go with the mutator that decreases CC res?

With that mutator if you don’t have Mad Queen, Grava or Gargabol and you are a very good pilot SR 75 maybe (with them being present you would have to kite them and it would take long time but it is perhaps doable but not enjoyable). Without that mutator and being a good pilot - absolutely SR 75 and maybe higher. But I don’t push that far in my playthroughs. I tried it with some chars but I find most of the fun in SR 65-66 and in main campaign.

And you mean increases their CC res not decreases. If it would decrease them it would be nice

The problem of this build is not having direct ADCtH to AAR. But indirect lifeleech from devotions. It is not a problem in SR 65-66 if you can freeze everything which most of the time you can. In higher shards it could become a problem. Heavy physical hitters are dangerous. You have to be very careful when fighting them.

And it is not a bad build at all. Just not the best AAR build but an OK one for sure.

Aether on AAR is converted to fire.
Vitality is Converted to Aether and then it is lost as it will not be converted from Aether to Fire 2nd time, right?
So what is the point of green belt? THe stats and +1 to Arcanist?

Love it man, I’m a sucker for freeze builds, and CDR exploitation builds. This looks like fun!

It really is a lot of fun

I had a similar concept planned, but you seem to have perfected it. Well done!

I was planning to squeeze in two Blazeseer rings and pierce to fire damage conversion belt and fire devotions. But I could not get high enough levels in AAR and disintegration that way.

I’d say that a green off-hand with adtch mod to AAR will improve your build tonns! But nice concept.

Yes, the green off hand would improve it but it would not be that thematic

If you want it to be more thematic then Star Pact is your Exclusive skill. You will have roughly the same damage but gameplay would be much smoother.

How is that going to be a problem for your build?

Mods on the dagger have priority over global conversions. So global Aether to Cold does not change your AAR’s damage as long as you have that dagger equipped.

EDIT: you can easily check it by turning Star Pact on and off while you have that dagger equipped and looking at your AAR’s damage breakdown in the second tab.

I did not know that. But build is already starved on fire damage and skil points would have to be changed to get full cast speed again. I am not sure that it will be better but I will try it.

I remember I have tested Fire AAR sorc few patches ago but never posted it:

https://www.grimtools.com/calc/xZy8aBwV - maybe you can take something from that calc.

The thing with Star Pact vs. Reckless Power on Fire Arcanists is that CDR always wins, even on spam/chanelling builds.

I planned Star Pact at first but then I noticed the conversion. I didn’t know that it doesn’t matter but Star Pact was in my original plans. I will try it later today.

I have tried it. It is slightly better with Star Pact but not that much. I will edit the post of the build shortly. You will still have to use some health potions. But Behemoth is almost always up now. But it is definitely more thematic. This is the way I wanted it at first. Thanks