The reason behind this build is to use The Mageslayer set which empowers Olexra’s Flash Freeze (works on nemesis) and makes useful its fire resistance reduction and combining it with Aegis of Menhir fully converted to fire with monster infrequent item - Colossal Defender. For movement Vire’s Might is used and Wendigo Rush (from rune - movement skill like Vire and has ADCtH). For vitality and chaos conversion on devotions Blazeheart is used. Shield and Blazeheart also reduce cooldown for Aegis of Menhir by 0.8 seconds. It is extremely funny build - you freeze enemies with OFF, then skate through them using two movement skills and throw shield at them using Aegis of Menhir. You can be practically in constant movement and if you play carefully you don’t get hit much + freezing enemies with OFF. You have to learn to play with this build but if you do then it is funny and strong.

There are two monster infrequent items in this build that give bonuses to Aegis of Menhir. Affixes are chosen for the best build and so that they are not double rare. There is a flexibility in this build regarding affixes because augments are not used for resistances. That means you can make this build work with practically any affixes! The shield can be bought from Hyram (Malmouth Steelcap District) and the medal can be bought from Ancient Grove vendor. Or they can both be farmed.

Crafting bonus on helm is to physique and on belt is to stun resistance.

with good movement you can reduce getting hit

This build does SR 65-66 easily. The only hard boss for this build is Korvaak which hits this build unusually hard in his last phase but he can be frozen. I don’t push my characters higher but it can go higher if you are a skilled player. I don’t play Crucible so I don’t have a time number for it. 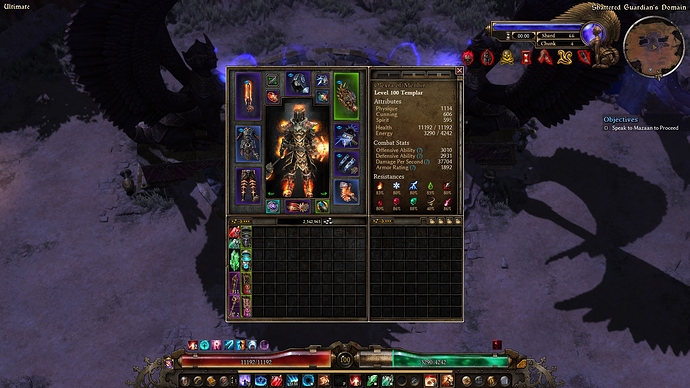 nice one! Those MI’s are not even hard to farm, the shield can be powershopped from Hyram and so can the medal from AG vendor

Did you check with the good ol Enchanted flints? You already have decent crit dmg.

How was 20/16 on Aegis determined? You could get 22/16 if you remove some points from volcanic stride

Eternity does not work with Shields, Iskandra could be a better fit here.

Oh sh*t, thanks. I completely missed that. What a noobish overlook.

Happened to me more than I’d like to admit

But I need that DA on Eternity so I will not change it. Serenity can be alternative but you lose damage.

I recommend taking Iskandra and using Ravager’s Eye on one of the weapons - more DA and damage that way.

Plus, you are missing a lot of damage by taking items/augments that don’t boost your dot damage when you are playing a build like that (like your jewellery augments for example).

Skillpoint distribution is for softcapping a lot of skills Ascension Vire line and others. I like crit damage on the weapon component.

Iskandra and one ravager Eye could work bur it lowers my overcap on vitality res. Forgefire is improtant for DA maybe arcanum dust is possible but I don’t see that much difference. This gives flat elemental at least.

I changed it for iskandra and one ravager eye. I will playtest it now but it should not be worse definitely and let’s see how better it will be.

I am sure you can find Vitality res if you reshuffle your armor augments. You might want to change Living Armor in Shoulders to Sacred Plating to get more effective res out of that slot https://www.grimtools.com/calc/p25Lw6PN

Flat damage only works on skills with weapon damage and in your case it’s Aegis. Boosting it with Elemental flat (so just 1/3rd out of it is Fire) won’t have any real effects. In your case it’s all about Burn damage.

I don’t and movement skills do weapon damage too. I changed grimtools link. I will playtest it. It should be slightly better but not by much I guess.

It’s always about small improvements here and there that can push your build to the next level. Good luck!

And do you have any idea why Korvaak hit so hard with this char? The toughest fights are with him and not with Grava or Gargabol which I would expect.

Korvaak in Shards is always deadly. Regarding your character, I would recommend improving its survivability by overcapping Maiven as much as possible, taking Resilience to 5/12 and Haven to 5/12 (both are breakpoints).

You are also playing a build with pretty low synergy from gear: i.e. you are a caster with almost no CDR (crucial to caster’s performance both in terms of damage and survival) and no real means to boost your shield’s stats.

Another thing, you are missing on tonns of damage by not taking Ulzuin’s Torch and also missing any decent means of adtch (Bat or Giant). Not having enough damage means that your fights take longer than usual meaning that when you run out of Ghoul/Mirror you still have to fight but you have nothing to fall back on.

No I actually kill things pretty fast. I tried to take Ulzuin but I couldn’t fit it in because I went for revenant and dying god. I would expect Grava or Gargabol be tougher. I just did two quick runs of SR 65-66 with no deaths (just like before) and it is slightly better. Competent farmer of SR 65-66 but the original version was as well.
Not enough skillpoints to do it all. I made a lot of compromises but the build works OK for what I want SR 65-66 and it is fun to play most of all

I just love freezing things with OFF.

I just love freezing things with OFF

You like OFF and PS, next project: combine those two in a build

But could be done as a meme I guess

Must play it first