Reason behind this build is to create a 2H melee Primal Strike Ultos without using Savagery. Build is strong and capable. Soldier was chosen because of bonuses to OA, DA, armor absorption, life, physique, some resistances and general tankiness that soldier provides. Many iterations of devotions were tried to fix the only problem of the build that was energy regen. In this thread it was fixed with the help of tqFan and malawiglenn.

I also have other Primal Strike builds here, here, here and here.

I used crafting bonuses to slow resistance (helm) and to armor (medal).

image from the game with passive buffs + Fighting Spirit

good damage from Rune of the Stormtitan

lifesteal is 18 % (with Wendigo Totem)

good armor around 3000 with crafting bonus

important CC resistances are high (trap resistance is not that important, Benny is easy)

This build is doing SR 65-66 easily. In tough battles life goes up and down but don’t worry too much

This build is neither a great tank neither a glass cannon - it is somewhere in the middle. I managed to facetank The Iron Maiden and Fabius at the same time with it but it was crazy and will not work necessarily always. Single nemesis in SR are fine. Killing Grava takes time though. I don’t push my builds higher than SR 66 but it is possible with this build if you are a skilled player. I don’t have a time number for Crucible because I don’t play it.

You are right. I missed that.
Edit: link changed to corrected version

Build looks cool! Could you elaborate on which path you took in the devotion tree?

I was going through my stashes looking at some greens that I had and thought that changing boots to any stoneplate greaves “of insight” (+ a prefix with some resistances that can be matched with armor augment replacements). It gives neat energy regen and also a nice dmg boost. This should render soul shard in ring obsolete and can thus be changed back to bloodied crystal. For instance: https://www.grimtools.com/calc/a2E39elZ

It is a nice option. But I wanted to make it greenless. I have a theorycrafted build for primal strike with no ultos set and no savagery using just two greens (they can be only single rare, even one of them can be single rare and the other only magic, but rare affixes make it a lot better). I will play it in the near future and post it.

I was considering including valaxteria armor for my beginner guide on PS warder, but I thought the armor was too thin

Chest is not that bad. But phys res is a problem on such a build I have managed to get 18 % there and 1700 armor. It is an elementalist with massive lightning RR but squishier. Perhaps conjurer or vinidicator might be sturdier.

Unfortunately, without Savagery charges Ultos build becomes severly handicapped. Also itemization and devotions here are rather sub-optimal and look like re-inventing the wheel more than anything. I recommend checking existing Ultos builds (there are quite a few, especially Warders) and taking some pointers on gearing/devotions from there.

It works fine, can do SR 65 easily. Not everybody likes using savagery charges.

It works fine, can do SR 65 easily. Not everybody likes using savagaery charges.

I understand, but at least on Devo and items front there are some gear choices that have proved to be essential for any Ultos build out there. Like for instance this ring: 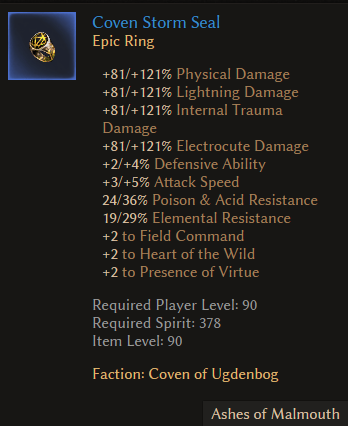 Spear of Heavens is also too good to pass up. Passive adtch plus very decent damage from the proc and 180% to Lightning from the nods.

Nice ring but I will lose 4 % OA if I will use it or you will lose pierce res.

I am not making standard type builds. There are enough of them. What I did works for what I want - SR65. Others can do it their way.

Build has about +2800% lightning damage. And extra + 180% more is about 7% dps increase. Getting spear (and maintain Ultos) would mean giving up harvest and thus back at low energy regen again which I believe was one of the bottlenecks the build author had. Perhaps one could find another way to maintain energy and grab spear simultaneously.

I am not making cookie cutter builds. There are enough of them.

Just giving the advice on how to make it better, man.

Without breaking your “No savagery” concept. Better everything.

Loosing 3k life, almost 100 DA, not really better. Problematic energy regen. DPS is slightly higher. Not better for me. Better lifesteal tho. I am going away from PC for couple of hours.

OA and adtch are more critical to Ultos’ build’s survival, trust me. You need to capitalize on that fat crit.

HP does not scale well if your other defenses (like in your case - phys res and overcaps) are lacking. But if you insist: