The reason behind this build is to make use of the Twilight’s Veil dagger which is aether and chaos based. Considering my previous aether spinner build I decided to go for aether + chaos spinner. Because of flat damage bonuses I decided to go for the Arcanist. At first I thought about the Demolitionist because of resistance reduction on the Thermite Mines but the build was lacking in damage a lot when I was theorycrafting it. With the Templar I have a great DPS and I managed to get respectable 74 % resistance reduction for both aether and chaos. I consider this build to be my greatest theorycrafting achievment. I started it just for fun but then I realized it could be done actually. Damage is from large part due to a spirit dump.

I used two Monster Infrequent items - Valdaran’s Shoulderguard and Gargoyle Girdle. You want affixes for OA and DA and you absolutely need Dread Lord’s prefix on the belt for lifesteal. I used crafting bonuses on helm and amulet for freeze resistance and on pants for stun resistance.

OKish aether and chaos resistance reduction from Guardians of Empyrion (Conduit for them), Arcane Bomb, Eldritch Fire and Revenant - up to -74 %

up to 345 OA reduction to enemies from Dark Desires (or Eye of Korvaak), Arcane Bomb and component

at least +3 to all max resistances (+7 with Resilience active)

% reduced damage to enemies from Soulfire

This build does SR 65-66 relatively easily. No boss is a problem. I don’t push my characters higher but it can go higher if you are a skilled player. I don’t play Crucible so I don’t have a time number for it.

image from SR 66 with Korvaak dying

I have also made a thread for improving Aether + Chaos damage combination here.

Too bad Seal of Void component skill not activate from EoR, would have been dope!

nice one as always

Did you think about using Mythical Chains of Anguish instead of the Gargoyle belt?

No, I hate that belt with a passion. Mythical Vestents of Severed Faith gives even more DPS but low res with it and life.

I also tried a version with the SR set chest armor. That one is possible as well. Slightly less DPS. That belt can be worn if somebody doesn’t mind it or before you can farm that MI one. There is also a space for more spirit dump. I put a lot of points into physique for DA. I like higher DA.

If somebody wanted to go all in on the DPS side and doesn’t mind worse defense then this version is good https://www.grimtools.com/calc/62aMM9x2
But it would be extremely squishy with that proc from the belt active.

What adjustments do you recommend for safe HC style? Or is it good as it is?

I never played hardcore in any aRPG, so I don’t know. I would guess it is not for hardcore. I don’t care about celestials much but Lokarr and Mogdrogen can be killed with almost everything I guess. Ravager and Calla absolutely no go with this build.

Although lightning res overcap is not that high for Mogdrogen. Some changes would have to be made before fighting him. My aether Opressor is stronger than this one and this build is probably a bit better than my aether Shieldbreaker. Both are here.

My aether Blitz Krieg could be for hardcore though. Tough to kill him. I died with him only once and it was because of lack of my attention in SR 65-66.

. It’s always cool to try out random stuff even if it might seem weird, but a very rewarding feeling when it actually works out.

Yep, I am really satisfied with this one

I mean if you hit reaper do you just alt f4?

Reaper is fine. I fought against him in SR 65-66 and killed him easily. I had to use mirror though. He hits hard. You can nullify yourself from the debuffs.

I initially replied to you on Ravager not Reaper. I changed my previous post.

dude you are a freakin machine, man! How do you manage to pump out level 100 builds multiple times a day, almost each day?! Thats nuts, and theyre all really clever ones too!

I have a lot of played builds. And now with corona I play one in two days. I play only in ultimate and then do SR.

I do GDstash greens, but epics and legendaries are legit. And I do play through ultimate (that takes only several hours) and SR runs are usually like 10 to meet all the different bosses and see different mutators. But of course no video proof for everything so who cares what I say, right?

With the epic and legendaries I throw away like 90 % of them and keep only the best rolled ones. I have many mules for it.

For example I still have not completeted Morgoneth or Vanquisher set (f*ck RNG). That is why you will not see any builds with it until I do. And on one of my builds I needed a Ravager’s helm so I went to kill him for the first time ever. I don’t care about celestials otherwise at all.

Maybe I could post a picture of played time with it always specially for you so that you will be satisfied. 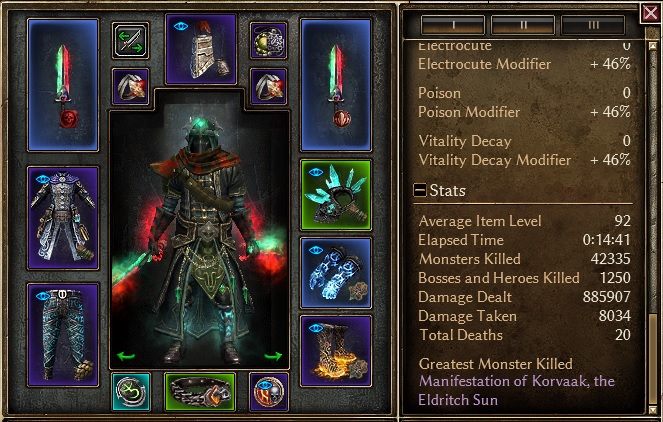 Most of the deaths were with earlier version of the char that was not optimized completely. My first version had only 200k DPS, worse life and barely overcapped res. I had also a totally different devo path - a lot worse.