The reason behind this build is to make a lightning DW melee using two Stormrends for greater CDR on Primal Strike and using it as a nuke while spamming Savagery. Trickster was chosen because of its inherent DW melee support and its WPS. This build has four nukes with very high % DW weapon damage - Primal Strike, Sudden Strike (rune on medal), Execution and Amarasta’s Quick Cut. I tried a version with the Ultos set but it was inherently squishy and I went therefore for the Shattered Guardian set. It does SR 65-66 relatively fast and easily. Devotions were picked for highest attack speed possible because Stormrend has no attack speed on it.

I also have other Primal Strike builds here, here, here and here.

In order for you to equip these items you need to have crafting bonuses to physique on pants and medal otherwise you have to redistribute attribute points. I also used movement speed crafting bonus on boots. Put just enough points into physique to equip the chest armor. Everything else put into cunning for OA.

Stormrend is farmable from Monster Totems (Aertherwarped) in Main Campaign. Shattered Guardian set can be bought in SR after completing at least SR 60-61. There are blueprints for pants and boots. Those can be farmed or the items alone can drop anywhere. Blueprint for medal can be bought at the Dreeg’s vendor. Rings can be bought from the Coven’s vendor. You only need to have belt and gloves. Everything else is relatively easily farmable.

At first I tried to make a version with the Ultos set. It was able to do SR 65-66 but not very consistently and killing Grava was almost impossible. I think that it is because of the inherent squishiness of the Ultos set. Grimtools link for the Ultos version is here.

with all bonuses over 3000 DA (Savagery buff, Pneumatic Burst and physique bonus from crafting)

healing on standby from Pneumatic Burst

at least +3 to maximum all resistances

This build does SR 65-66 relatively easily. It doesn’t even have a problem with Grava which lightning builds usually do. I don’t push my characters higher but I guess it can go higher if you are a skilled player. I don’t play Crucible so I don’t have a time number for it. 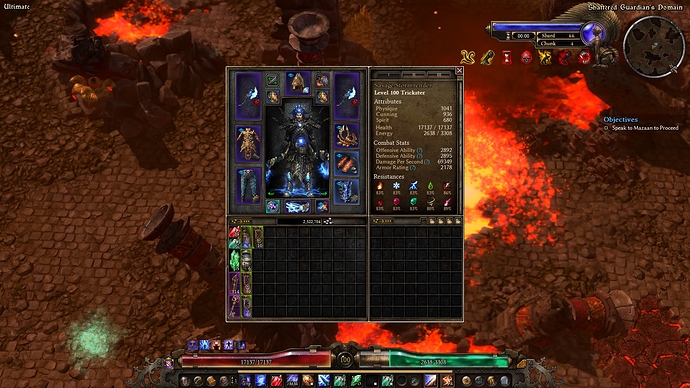 130 DA reduction from Veil of Shadow

you also have OA reduction on arcane bomb.

Personally, I would have used M Legplates of Valor and M Final March for more phys res etc

Yeah thanks. I will correct it. You would have even lower damage. The build is quite tanky and it is not necessary. You can facetenk two nemesis in SR with it if you are careful.

would have 2.1k dmg multiplier compared to 2.2k, its 4.5% less damage but if that extra tankyness is not needed so be it

[remember that spirit added magical damage is not included in the tooltip / char stats tab so in your set-up you have +1900% from gear etc and +300% from spirit that is +2.2k%]

I have played more with this build and the Ultos one and it is really a stark difference between the Ultos set and the Shattered Guardian set. Ultos set needs some serious buffs. I would add slow resistance and trap resistance to it. And considering it can be used on 2H ranged or DW melee it should get some more physical resistance (phys res is on the Ultos axe - split it and move half of it to 4 piece set bonus). Chest armor should get some phys res. It would only be a total buff of let’s say 4 % phys res (add it on chest) and some CC res. I would also change vitality resistance on the helm for chaos resistance. Ultos builds are missing chaos resistance a lot and vitality res is plentiful on them. Pierce resistance is also missing on builds with Ultos.

Edit: I have planned to do that PS SJ Elementalist with stormrend and 2H cadence Battlemage with the new 2H mace and SR set. But I have other, more meta, builds to level up and play first. I hate this game, they always add more shit to farm haha

I have elemental cadence already finished with another weapon (double rare green). But I want to better it with the new one and it doesn’t drop at all. I have everything else many times from new items but not this one. There are too few voidtouched totems I guess when I play through main campaign.

I think I am missing two of those totem items. I just go to Gates of Necropolis and Necropolis interiour for void totems. You can see them almost immediately on the map if/where they spawn

I think so, but I have no data or info. But I guess the higher the “prefix” the chance of getting better loot.

and btw I have played GD 2k hours but I took a break from like late August last year up until basically now and I decided to kinda like restart all together. Thanks to corona quarantine, I play like 6h / day so I already have 3 fully geared chars ready to farm

I have many pieces of the vanquisher set but still no helm. The same with morgoneth helm. I play only on ultimate now and do like 1 build each 2 days. I am now playing a special skating build. Will post it in a few days.

I farmed yesterday the Scion of Arcane force. I will post a tanky Battlemage with it in a short while. I am also working on PS with shield archon

Nice, then I can see if its worth doing that Battlemage I was planning (I assue you have planned something similar, great minds do think alike you know

) otherwise I can just do my second-plan, Elemental cadance witchblade.

Are you plotting some kind of Primal Strike collection? One PS build per mastery combo?

I am plannig a lot of PS builds. Unorthodox ones

Great Guide! Would you happen to have a more beginner friendly version? Thanks!

I don’t know what you exacatly mean by that. Stormrend is an endgame weapon (level 94). PS doesn’t work without it for 1 handed weapons. In the text there is also a link to a version with the Ultos set if you don’t want the SR set. But it is not consistent for SR 65-66. For main campaign it will be more than fine though.

What I meant was do you have a version with more faction gears?

I don’t play much with faction gear, so I can not help you unfortunately. But for using Stormrend I would guess you will need better gear than faction gear. Perhaps @malawiglenn can help you with this. I would also add that I don’t think that Trickster is much beginner friendly.

For beginner builds try some of @malawiglenn builds here.