This is my second venture into the realm of retaliation builds. That’s pretty much all that I wanted to say in this section. Check all of my builds here.

Questions asked with a certain degree of acidity

How consistent is the build with Fevered Rage?
Pretty consistent once you get a grasp of it. You can always turn it off though.
What about green amulet - Ronaprax Sting? Or good old Pestilence of the Dreeg?
I have tested the build with a green amulet initially and I felt like it was the worst option out of three. Pestilence is great but build stops being consistent with it unfortunately. And Conduit is just a bit slower

Found this combination of gear to be the most balanced one. Skills (some) can be redistributed differently if needed. For leveling check leveling guides on this forum. This is an endgame build and works as advertised once you equip all the items/skills/devotions at character level 100

Remember, you can always turn off Fevered Rage for a calmer and safer gameplay.
In Crucible everything is facetankable but be extra careful with Mad Queen and with Anasteria.
In Shattered Realm farming 75-76 with Fevered Rage is a lot of fun. Higher Shards can be conquered without Fevered Rage.

General with Ascension up 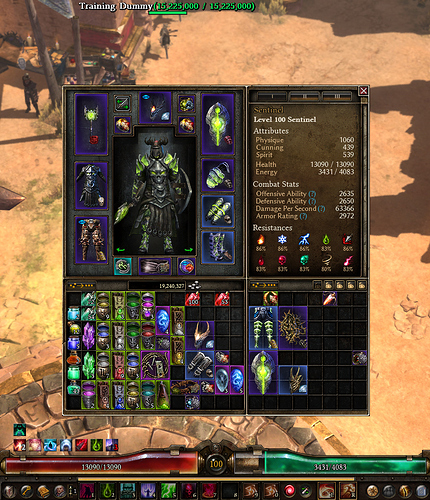 Retaliation damage with all the procs up 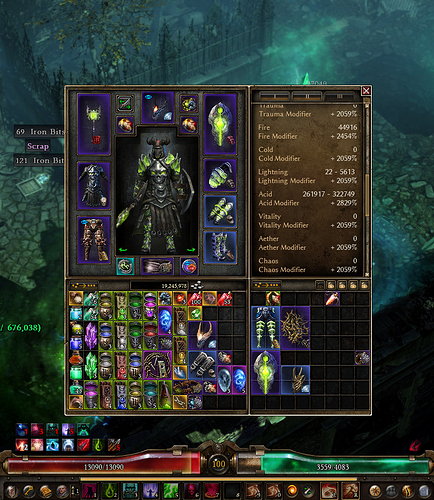 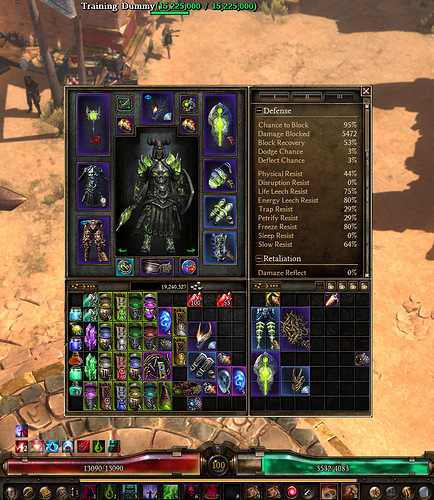 I want to thank @AlkamosHater for helping me fine-tune Ravager’s spec and recording videos of the kills and @supertolik for recording a video of his Crucible run. It’s time to nerf Cyclone set again.

That’s our kind of man

Great build, I had pleasure to test it, gameplay is really colorful and dynamic what is pretty rare for retaliations. Ravager’s version after swapping some auguments and components for cover resistances can be turned into super tank for rest content too.

Finally Sentinel of three… Sentinel and not Warlord or Witchblade or classless???

interesting approach and great results! Since I don’t know anything about retal, will end my comment here

Overwhelming damage, but difficult to control survivability in naked runs.

Not before static strike

Yeah. They also put the acid to phys conversion on targo to the chestpiece so phys sentinel set retal won’t get high conversion.

I am assuming the low sheet OA even adding seal of annihilation and vulnerability debuffs afterwards is fine because of fevered rage? I never really played around with fevered rage, is there an established ballpark for OA that works well with it in this kind of content? Like ~2700 range instead of ~3k range is enough? (based on this build?)

It doesn’t really need OA since none of the procs are on crit and build’s crit damage is insignificant. Most of the damage comes from monsters breaking their faces trying to hit you at 150% speed buff from Fevered Rage.

Overwhelming damage, but difficult to control survivability in naked runs.

This is simply unacceptable, Zantai. Can we give this one like flat absorb aura and give Cindertouch gloves some kind of negative conversion?

Yeah, I mean, it’s a legitimately balanced set, not that pesky op Cyclone.

Thanks for the vid! Gonna add it to the op.

Hey is this build viable for HC?

Hey is this build viable for HC?

For HC I would definitely turn off Fevered Rage tho.

Thanks for another fun build Mad_lee.

Just dinged 100 and have started farming for the rings. Morgoneth crushed me with Fevered Rage on, but was easy with it off, so now just doing chill runs through Tomb of the Heretic.

Thanks for another fun build Mad_lee.

Just dinged 100 and have started farming for the rings. Morgoneth crushed me with Fevered Rage on, but was easy with it off, so now just doing chill runs through Tomb of the Heretic

Not sure if Morgo can hurt this build when it’s fully equipped. But in general, if you are having trouble with Fevered Rage, just turn it off and it’s super easy. For SR farming I would definitely do it with FR tho, just for speed.

Cool build! Could you explain why you are using Seal of Blades on the weapon?

Thanks. I am using to get some extra leech from my Aegis and Vire attacks. Plus extra armor is always welcome since this build relies quite a lot on passive defenses because incoming damage is pretty huge.

Aegis doesn’t get the extra 5% life steal because that is only locally applied to the scepter.

Aegis doesn’t get the extra 5% life steal because that is only locally applied to the scepter.

ah, god damn, so I should have put it into the shield to get global adtch? Or shield doesn’t act as an off-hand and inserting it in a shield will only give adtch to attacks with shield’s weapon damage?

Yes, shields act like a second weapon, because they have their own weapon damage ( unlike off-hands), so if you put a component that gives either life steal or flat damage they will only be applied to the shield itself and thus, to skills that use off-hand damage ( like aegis, blitz, abb etc.) It works like dual wielding. Also ingame life leech stat should give you 2 values, unlike grimtools that just adds them. Global ADCtH applies to both of them obviously.