Shout out to @thejabrixone for his refined build guide back in 1.1.4.
His guide can be seen here: [1.1.4.2] The Burning Devil Rises - 2H WPS Hybrid Fire Retal Paladin

With the release of 1.1.7, Zantai and friends hit RF rata builds hard by lowering basically every single source of rata to RF. Unfortunately, that leaves most ranged RF rata builds in the water in terms of their usefulness. That is… except Hellborne.

While Hellborne did not escape the wrath of the RF rata nerfs (going from 15% to now only 8%), it fortunately got some much needed compensation buffs in the form of a whopping 1000 flat fire retal, 8% more attack speed, and increased rata to Bursting Rounds (from 20% to 30%).

Of course, however, many other parts of this build have also been changed with 1.1.7. Stoneguard Ward now only gives 4% rata (originally 9%), and Okaloth’s Visage now no longer gives any rata to RF. Instead, it has been replaced with rata and %wd to Smite.

In total, these changes have on net seemed to still result in a nerf for this build. I have tinkered around with various setups, and so far, I cannot seem to get this build to do the same level of damage it did prior to 1.1.7. A bit sad considering that this build was never even that fast in crucible and is a pretty lousy sr character.

However, I think I’ve come at least close to reaching our old dps, and our new setups should still perform well. 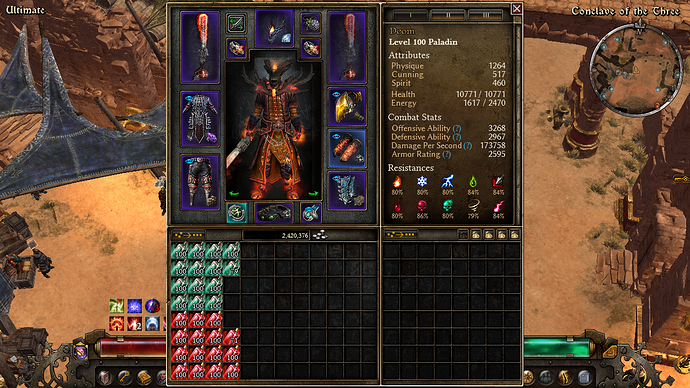 The build concept remains somewhat similar to what it was previously. We scale both the weapon damage portion and rata portion of our RF to fully maximize our damage. Considering how convenient %fire damage is to come by on various retaliation items, we can actually get some pretty decent numbers scaling both at the same time.

However, we have shifted a few things around to adapt to the 1.1.7 changes. The reworked Okaloth’s Visage has made our RF worse, but in exchange, made Smite an actually decent weapon pool skill for our build. I was originally thinking that Okaloth’s might not even be worth using anymore, but its stats alone (fire retal, %fire damage, +1 Oathkeeper, and newly added %retal damage) justify it staying as our helm slot. As such, the Smite bonuses are the nice cherry on top, and I have since replaced Chilling Rounds and a few points from Bursting Rounds to accommodate running Smite.

Runesinged Handguards vs Gauntlets of Ignaffar is a pretty tough decision. I opted for Runesinged Handguards in this setup mostly because it was very convenient for our resistances. The resistances on Gauntlets of Ignaffar are pretty useless on the most part as our chaos resistance is pretty well supplied by our other items and fire resistance by itself doesn’t do much for our build (especially since our fire res is already higher than cold and lightning just from our devotions). That being said, we do get a ton of elemental resistances in the form of buffs (Consecration and Inquisitor’s Seal) as well as aether (from Word of Renewal), so it is not necessarily mandatory. In terms of damage, it’s clearly no contest. Gauntlets of Ignaffar provide more %damage (alongside %burning), potentially 1% higher attack speed with max rolls, and a chunk of flat fire damage in the form of its pierce to fire conversion and flat fire damage bonus to RF. Still, though, Runesinged Handguards has up to 5% DA which puts us to almost 3k DA with Word of Renewal and Consecration.

Blacksmith bonuses are sort of up to you on this one. OA, slow res, or %physique would be my choices.

Kilrian’s Shattered Soul can be replaced with Chains of Oleron for more OA, but I currently find it extremely convenient for capping our attack speed and providing us some much needed vitality resistance (with some %fire damage bonus on top). The resistance, however, can be made up for with some augment changes or you can live with it if you don’t mind sub 30 overcap. Swapping out the aether resistance augments for vitality resistance augments can work but just make sure that you at least still get comfortable aether res with Word of Renewal up.

Weapon augment can be played around with. Solael’s Vision gives the most %fire damage on top of providing some nice vit res and health, but you can swap this out for a Ravager’s Eye if you feel you need more defenses. Another option is Solar Radiance for the OA and flat damage.


(credit goes to roman for piloting)

Not recommended for SR due to low phys res and health, but shard 60-61 should be manageable with proper piloting.