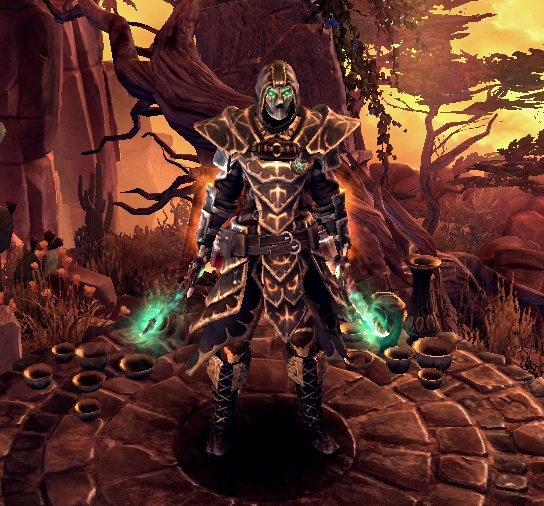 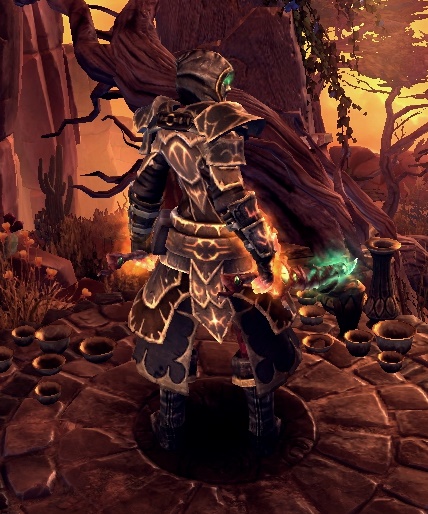 Hi everyone, just out of boredom; I turned my sorcerer to an aether one which resulted quite good. I made a tanky one as usual to be able to play careless. It’s too hot here and I can’t play properly because heat made my overheating problem worse.

Images from the game with perma buffs and Mindwarp proc

Gears : I choosed Shattered Guardian Set instead of Krieg, because why not? No just kidding, Krieg set has no bonus for demo side and I wanted atleast 12k health so I gave up some damage for it.
There is only one MI here

Best choice was Dread Lord’s prefix so I chanced the previous belt and balanced augments and components accordingly, it caps your pierce resistance, gives some conversion for Scales and extra lifesteal along with +1 Arcanist skills.

Some of you might ask why not dual Mindwarp; well I didn’t want to use eternal haunt ring; so I got %10 more RR by Edge of Sanity and compensated the AS and Flat damage with Veilwarden Rings and since the %X and flat RR doesn’t stack, the only gain from Dual Mindwarp is more conversion and damage via it’s proc and it’s not worh %20 more resist reduction. I can cap the AS by getting better rolled weapons, rings or gloves.

I changed Korvaak’s Brand to Direworlf Crest, gained some racial damage and more OA there is no another option for DW, Wraithbone legs has good OA and skill bonusses and Timewarperd boots has really nice resistances plus hellfire Mine bonus.

Though note that my gear is not perfectly rolled so it has room for improvement.

Devotions : I went for blues again for more tankiness, and since I have no ele>aether conversion Seru wasn’t even an option. Empyrion for Damage Reduction, Arcane Bomb is BiS ofc, I took Alladrah and Scales for more tankiness, since I have flat RR on weapon, scales RR doesn’t make a difference here but helps a lot. Ulo is mostly for resistances, was the best choice while reaching the affinity requirements of LoE. And Ghoul to get more life steal and circuit breaker.

The build has sorta low weapon damage but good RR and good AS compensates the difference.

The only creature you should be careful againts is Reaper of the Lost but it’s damage is not the problem, it just takes a bit longer than others so try to deal with him on 1v1. Aleksander and Valdaran are no problem since we got racial damage. Cthonics are even easier.

The stats and some resistances are a bit higher in game, like Vitality overcap is %27. I change SR set pieces when I find better ones so not all gear is best rolled but some are. /As I said, if I find a better belt with pierce resist especially with aether damage I’ll swap and respec since Arcane Will also provides a good amount of DA(this part is done with Dread Lord one)/

Nice build.
Direwolf medal might be the better option for dw enabler though. The %beast damage will help with reaper

Good idea actually thanks, didn’t came to my mind. I lost some AS and some elemental resist inexchange more OA, good deal of aether resist and racial damage; the pierce resistance is not much but to compensate elemental resistances which are not that high overcapped I might need to change some components and augments. But It’s doable, https://www.grimtools.com/calc/q2m438WN something like this should do the trick, I will try this setup on next run.

Build updated, including images and grimtools link and another SR 75-76 run image added. No devotion change was maded.

I changed some skill points also, there is some sheet dps loss but mostly because static strike and brimstone are now only 1 pointers.
I put some points into Vindictive Flame to gain loss AS.
Changed gloves component to Ugdenbog Leather since we have enough lifesteal thanks to the belt.
Changed boot component to compensate the pierce resist loss from previous belt.
Some augments changed accordingly.

Build has now more lifesteal, more OA, DA is same, AS is same, better resistances except Fire & Lightning, racial damage is useful againts Reaper of the Lost in return almost no loss except some fire/lightning damage which we don’t need and some chaos damage. It become pretty solid, still no die in SR 75-76 runs, I will try to push further and update accordingly.