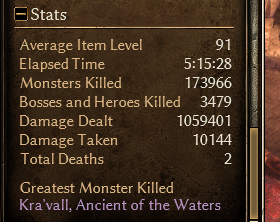 And here is the character https://www.grimtools.com/calc/mN4m1Oy2 (self-found, not following any builds, so don’t judge too strictly)
The strange thing is that the previous record was ~200k and looks just right - the real crit numbers that I always see are 150-180k. And now I just went to SR to grab the last skillpoint from there, went through 20-25 and when I finished - that is the number that I see now. The only player mutator was “reduced attack speed, increased some resistance” one - so I wasn’t super-overpowered due to mutators, I didn’t activate any shrines there either. So, how was I able to deal that much damage? It seems impossible to me - none of the attack skills I have are capable of doing that much. Ring of steel, Blitz, Shadow strike, Sudden strike rune - all have similar damage with crits being ~150k. Blade ark is even weaker than that.
I guess it may have been a bug?
Maybe some monster can be hit with multi-target attack and cumulative damage counts as “single hit” against him? (Though it has never happened to this character before, as the value in this tab has always been realistic and very close to what I see normally - and only now suddenly I see this).

But not to the point of quadrupling my damage output?
There were several spectral bosses in boss arenas that came as a set I guess and probably count as “1 boss” - maybe hitting them all simultaneously (I certainly did that) could cause this?

No. I have it installed, but never tried it yet.
Still, sounds interesting as I doubt any buff could have that much of an effect.

Adding to this yould bea lucky sting of mutators, where “marked” and /or tainted ormutator would even further increase your total damage

Oh, now I think I know what happened… (if I’m not mistaken about mechanics or stats)
Look at this monster… https://www.grimtools.com/monsterdb-sr/3379/skills
I encountered him during this run. Look at his 20% Vitality resistance - and the fact that despite being a boss with ~4kk HP (don’t remember what level he was) he forgot to take any of the usual for bosses “life reduction resistance”. Now look at War Cry that does 33% reduction to health… (and I start all battles with it).
4kk * 0.33 * 0.8 = 1.056kk damage - pretty much exactly what I see on the third tab.

Still, if the original “bug” is not a bug - I guess that boss not having any proper “boss resistances” - may be unintended.

Keep in mind that % health reduction is effected by Vitality resistance so it’d more likely be .33*.8 = 26.4% of his health and that it uses current health rather than max health so unless War Cry is your opening attack, it would do less.

But like Fluff said, mutators could factor in, can’t say for certain with as little information as we have.

Yes, exactly that - ~26.4% of his full health 4+kk - is 1kk which I see in third tab. And yes, it is my opening attack after I get into range with shadow strike (which wouldn’t hurt that 4+kk much in one hit)
(And I think he would have a bit more than 4kk initially - at shard 25 that would be 4.2kk at level 107 or 4.4kk at level 110 - he will only have 4kk at level 106 and lower but I guess it is too low level for a boss, 107-110 looks more realistic against level 100 character, though unfortunately I don’t remember his level - I do remember him lying knocked-down throughout the entire fight…)

And mutators were: the only yellow (player) mutator was -15% attack speed +some aether resistance, so no notable change in damage. Not sure about monster mutators, unfortunately, as they could alter vitality resistance or monster health. But let’s assume there were none. No shrines used either.
Still, looks very plausible.