Hi this is work in progress, I will update now and then 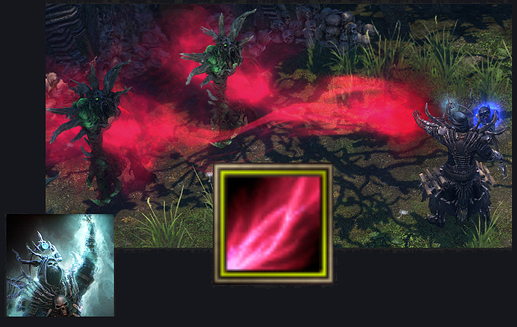 Hello! In a previous poll, this build was the winner (Poll) Which build(s) shall I do next? SSF - for "beginners" . So in this thread, I will document my journey towards making a “good” “budget” Drain Essence build from scratch (SSF : self solo found, only use items etc that this character will find, simulating how a new player would approach it).

I will also post some ideas and thoughts about this kind of build, and compare with similar skill (Albretch Aether Ray - AAR) that is just insane good. Drain Essence has kinda bad reputation, so maybe this thread can give it some love back.

The name of the character for this journal is “Uroboruuk” named after the grandmaster of the order of Death’s vigil https://grimdawn.gamepedia.com/Uroboruuk in lack of something more creative in terms of “roleplaying”

The “goal” set for this kind of build is also named after this dude Uroboruuk’s Guise .

Hope you enjoy thread, I wish you all best in draining the life out of your foes!

Much text are hidden inside spoilers, click them if you wanna read certain topic.
These are marked with a ► and Turqouise text.

✣ Introduction to the Drain Essence skill and the class choice

✣ “Final” “budget” build that we made

This Grim Tools I made as some kind of “goal/map” build to have something to aim for: https://www.grimtools.com/calc/62amGlO2 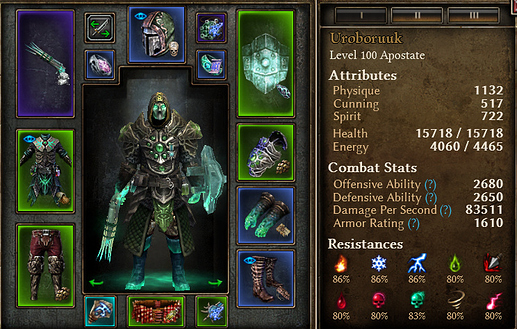 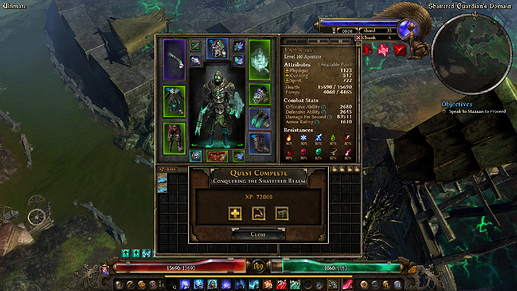 Here you can get some tips on what items you should look for and get early on and how to progress skills in the beginning.

NOTE If you wanna level faster, choose Inquisitor and go with word of pain as skill. I level with Drain Essence from start to keep the theme of build intact and also because TqFan would call me a cheater otherwise! Select necromancer and switch to Drain Essence around level 30ish when you have a spectral war shield and Ilgorr medel for Drain Essence.

Do it if you want, there are many guides on that just google it

✣ Final build item list and how to get them

I was actually surprised how well this build went, I was expecting way more problems. It is slow to start with (please consider transferring over energy pots, Ectoplasms and Bone Talisman relic from an already existing char if you have one!). Around level 30 when you get shield and Ilgorr medal, things start to go well

When you are around level 85 or so, things starts to fall off again - you need to have some patiance before you can use Hex launcher and Aetherbolt amulet. After this you have a pretty good and cheap farmer which you can start farming for Uroboruuk set with (or if you find other cool items you can make another build!)

Comparing with AAR (Albrecth aether ray) I’d say the pros with drain essence is that you hit with a “cone” instead of beam and you have some more sustain. Otherwise if you are brand new and wanna play a channeler, I would advise you to first/also try AAR build from scratch, there are plenty of those in the build compendium in the beginner build section

Another pro is that Drain Essence is available from level 2 basically, but then it has basically no AoE and cost lot of energy… if you wanna save yourself some trouble, consider start with inquisitor and word of pain skill for basically entire normal difficulty

Some old builds one can use for inspiration as well:

As you can see, these builds have about double dps than the budget version I made. But only the first one is from Forgotten Gods “era”.

Thank you for reading and I wish you luck with your build! Let me know if you have question and I can maybe help

you can already now read up to level 42 build journal

Have been playing since poll got closed lol

Damn dude! This is looking fantastic! Love the color scheme and overall layout, everything is matching and well organized. A pleasure to read through. Seriously, one of the best looking build guide/diary Ive seen.

Seriously, one of the best looking build guide/diary Ive seen.

Now we just need to fill it with good content lol

It wont be hard. Drain Essence builds are rad, and I think much cooler than AAR builds. AAR is what everyone does because its super easy, you can be braindead and smoke content with it. Drain Essence requires more finesse! AAR can pierce, but Drain Essence can spread out and fan across mobs. I prefer this behavior. I also prefer Drain Essence because to me it just feels more bad ass- you are sucking the life out of your enemies. Feels more dramatic! I have done Vitality Drain Essence in the past and it was one of the more fun builds I have played. Never tried Aether Drain Essence!

Ill have to start mine up tonight. I really like how you are doing this full blown SSF, and playing with Drain Essence from the start instead of using Inquisitor WOP to level. This guide will be a great resource for new players to come and discuss this kind of build, learn about it, and enjoy the game! Thanks for starting this!

I really like how you are doing this full blown SSF, and playing with Drain Essence from the start instead of using Inquisitor WOP to level.

Btw I took color scheme to fit the spell and the damage types, I had similar idea with the Fire Aegis build guide

(need to finish that guide at some point soon lol)

Thanks nery I will try my best!

I share your sentiment - op skills quickly become boring to me.

Are you leveling your reaper with blade trap?

I am currently working on my Ambassador of Cairn Horn of Gandar build and leveling with it isnt bad, the radius is huge and most mobs just explode. Only trouble so far is bosses/heros.

how are you planning to deal with them? What class you go with?

Im Paladin. Not sure how the build will pan out, im just improvising and figuring out what works as I go (my preferred learning method). I am looking to convert Pierce to Acid on HoG with the MI medal, and reduce its CD with other gear pieces/Path of the Three. Other than that sort of relying on random other shit for somewhat flavorful support like Inquisitor Seal and Ascension. But no real single target bombs. Its a meme build using “diplomatic” skills to win. I dont expect to handle CR or SR at all, but will be seeking to beat game on Ultimate at least.

I dont expect to handle CR or SR at all, but will be seeking to beat game on Ultimate at least.

Now that would be interesting! It also pumps War Cry I see. Could go Tactician. That could be fun!

It does, and I bet you anything no one is doing it for that reason, i wonder if theres any builds posted that are Bleed Tacticians. If not, ill be even more motivated to experiment with it. Ill have to do a search.

But atleast Paladin has more RR with Guardians. Guardians protecting a diplomat is more suitable to the theme.

True lol. But we should discuss this in another post and not hijack this one to discuss that stuff. I will make a post for the HoG build soon and welcome all that discussion there. Dont want beginners reading this guide to get side tracked LOL