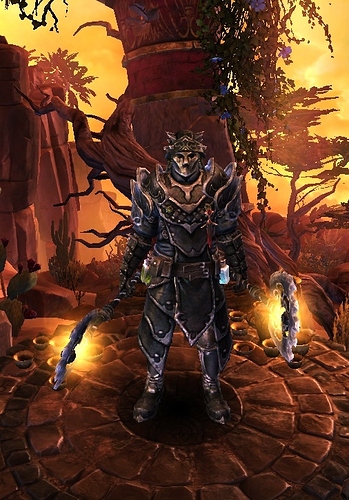 Hi everyone, today I want to show you well resulted boredom. I had a Belgo Blademaster like 1600 hours or so, it’s my fifth character or fourth not sure (since I deleted a couple of early created ones). I was using it as Ravager farmer, wasn’t playing with it much. I wanted to make a DM BM but I knew it would be too squishy for me so never bothered but a few days ago I got crazy and decided to try physical with Aetherwarped Cleavers and here is the result. It took 6 MI’s make it work properly and eventhough they’re not GDstashed, they’re good ones

PS: Helmet, Boots and Medal is crafted with %armor bonus

I’m not gonna explain it throughly. It took a few days to make it work efficiently. I tried Azrakaa+Oleron version aswell and this one is better. Blind Fury binded to BS is good enough(with 3,6k OA ofc

) and provides some extra lifesteal due to %75 WD on it.

Damage is not great as you can expect, because of low RR. It’s not the fastest farmer but it’s okay. Though lifesteal isn’t great so you need to proc Dryad and use PB frequently and use potions time to time. (with next patch some buff to bear might help it a little bit.) But build is tanky enough with 3,8k armor and %38 phys resist so you won’t get much trouble in farming range.

And I know now, to feel satisfied with Cadence AoE, one needs to improve it to ‘‘9 Target’’

This build is very skill point hungry so you need the kaisan amulet/serenity relic although they have better alternatives for more damage.

Ravager of Flesh Kill (since it’s a pre-existed character, I couldn’t change it but if you choose ‘‘Minds’’ combat will become easier.) 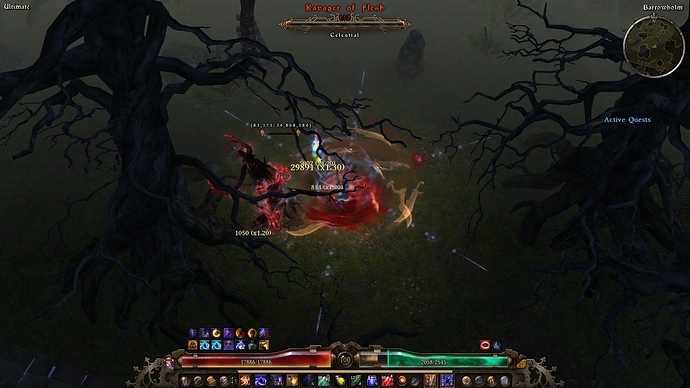 I used Royal Jelly Extract for energy regen, 3x Courageous Tincture and 2x Aether Cluster. No gear/devotion change made. You can see it almost took 400 seconds from the royal jelly duration. 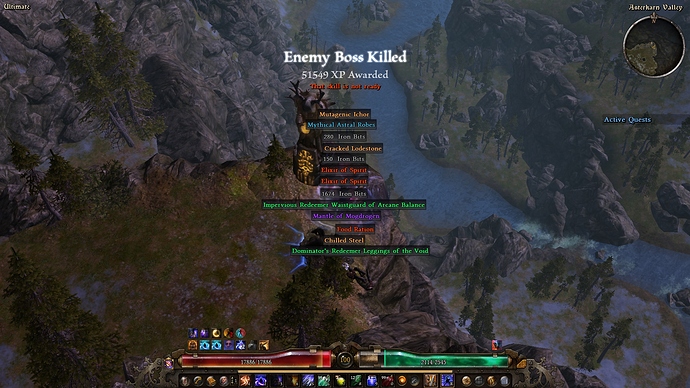 No devotion/gear change made. I used Stormshroud Oinment for extra lightning resistance and 1x Aether Cluster. It took 300 sec or something. 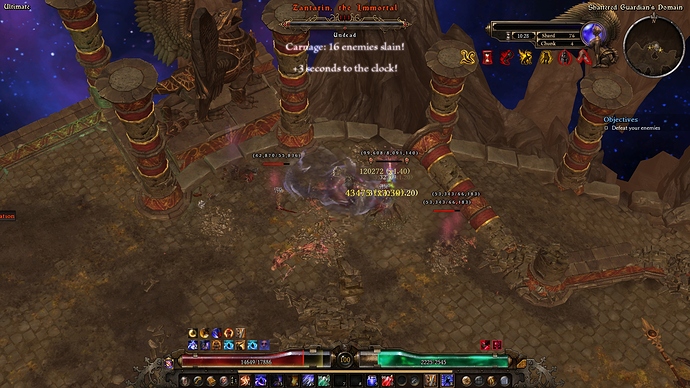 Build can do a bit more, maybe 85 but only if you take things slowly because even at 75-76 you can’t kill Arcane enemies fast enough before they null you(without even healer presence), so do the math.

this makes me want to test my dk https://www.grimtools.com/calc/aZqMy15Z
(I doubt it lives along lol)

this makes me want to test my dk https://www.grimtools.com/calc/aZqMy15Z
(I doubt it lives along lol)

Thanks. Looks good but you should use full warborn even though tyrant/of fervor have really good stats. And I would get NE aswell to reach %100 wps and increase cadence rate.

- love blademasters, even my stupid acid BM, it’s my favourite class in GD, and seeing a good Phys BM work is exciting
curious if you tried a vartiant(or this) using Earthsplitter to try take more advantage of the piercing side of NB and devos too?

using Earthsplitter to try take more advantage of the piercing side of NB and devos too?

Crimson Claws Cadence Modifier already converts all pierce into physical damage with Cadence, and that includes WPS, but it’s only Whirling Death for this instance. As you can see there is no single pierce damage on Cadence tooltip.

And only other pierce devotions are Unknown Soldier and Azrakaa. US doesn’t give any physical damage boost and I choosed Oleron for proc. You can take Azrakaa+ Oleron or Bear+ Azrakaa or Bear+Oleron since you can’t proc the third one efficiently. And taking all three cost you Ulzaad and other defensive constellations.

This build is very skill point hungry so you need the kaisan amulet/serenity relic although they have better alternatives for more damage.

(this is my current - GD stashed - interpretation of the physical multi target cadence Blademaster [full warborn for the set proc, quite sure not that fast [all my builds tend to be a bit slow] and no idea if super bosses are possible, and tried to make it so that you have as less as possible buttons to press, therefore no Ring of Steel or ABB: https://www.grimtools.com/calc/qNYpYarZ])

Yes or Bloodrager gem, I tried both but they lack stats so I choosed a Kaisan amulet with OA and physical damage. My first craft was only consist of 3 MI’s, belt and the weapons but I had to use others to make it better.

And full Warborn is a more classic approach, your version seems very good and might work better if you somehow increase the lifesteal.( Menhir’s Will doesn’t work with DW.) I just utilized the flat acid and some elemental damage to ignore the armor along with all the pierce damage.

Because you proc them through Cadence. If your suggestion would be true then binding procs to Cadence shouldn’t have to work with basic attacks but you can proc AM without Cadence hit. Plus with DW you can use WPS with Cadence hit aswell, it’s even make Cadence hit on second strike when it’s %100. And even I saw Cadence strikes 2-3 times in a row without any basic hits.

And for your suggestion, I love AQC but it’s DPS loss as 1 pointer, breakeven most of the time at 8/8 and you start to gain single target dps when it’s 11/8. Hardcapped AQC with high OA and modifiers is great for single target DPS gain but most of the time you have better options that require less investment. But it’s better to utilize AQC with more consistent AA skills like FS/RF/Savagery

i know about the interaction of attaching procs to Cadence and Cadence DW behavior
but that seems like it could/“should” be unrelated to wps tho (and specially Cadence modifiers/transmuters) ?

or atleast how i’m thinking
^otherwise it would ex mean that Execution or even Shears and AQC would become a multi target too from Cadence +target modifiers, no? (definitely/possibly seeming like that would make AQC worth it for aoe

^otherwise it would ex mean that Execution or even Shears and AQC would become a multi target too from Cadence +target modifiers, no? (definitely/possibly seeming like that would make AQC worth it for aoe

No technincally, your main hand hits Cadence and your off-hand procs the WPS with a basic attack(which might be single or multi target) and the animation usually doesn’t change as other AA+WPS combination so I’m not sure Cadence+Whirling Death part the WD hits all the target. It’ll require a test record in Fort Ikon multi-dummies and good math(which I don’t have) and might be better to do it with modded weapons.

But I’m sure you can’t make Execution or any other single target WPS into multi-target as Cadence target value.

And I also think AQC doesn’t worth investing with Cadence becuase you can’t multiply it’s WD, it’s just your %100 basic attack that procs it so it really doesn’t worth it. And as one pointer it has less than %100 WD so it even decrease your dps.

what i mean is, if the pierce modifier affects wps when using cadence, then +2 target modifier should too, right? since they are both “equally” modifiers
hence my confusion about the conversion modifier applying

what i mean is, if the pierce modifier affects wps when using cadence, then +2 target modifier should too, right? since they are both “equally” modifiers
hence my confusion about the conversion modifier applying

No, I’m saying that you don’t actually hit Cadence and WPS with same weapon, it happens at the same time with different hands so +X arc and Target modifiers shouldn’t combine here; but for conversion modifier you basically spam Cadence on lmb while hitting basic attacks that proc WPS aswell. I’m not %100 sure but I’m pretty sure it converts pierce from wps aswell.

indeed, and it made me curious, so i’m going to try and “test” it in my own fashion later today, could be interesting to see if it is

Menhir’s Will doesn’t work with DW

argh, this happens if you take a skill because it is typically a no brainer …

Have you really confirmed that the WPS get converted to physical with e.g. grim internals?
It works for say local conversion on fire strike, savagery, RF etc, but not so sure about cadence…

Have you really confirmed that the WPS get converted to physical with e.g. grim internals?

Nope, I don’t use GI that’s why I said I’m not %100 sure. If anyone made tests I can change my argument and accept I’m wrong depending on the data they provide.

If you have 0% WPS, then the 2 hits between cadence hit will not get converted unless you have global conversion. Hence why I think WPS will not be converted either.

If you have 0% WPS, then the 2 hits between cadence hit will not get converted unless you have global conversion. Hence why I think WPS will not be converted either.

Hmm, you might be right. I made an assumption based on other AA modifiers and Discord which I remember converts all damage into elemental while it’s on.

Discord which I remember converts all damage into elemental while it’s on.

again, not on the hits between cadence and not sure if the WPS gets converted.