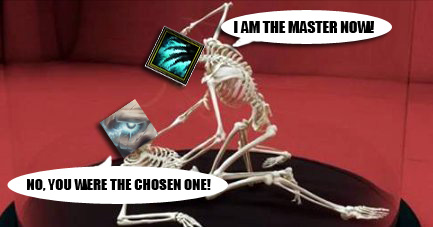 Hey guys,
As some of you already know, my approach to GD is wildly different than most. I spend a lot of time testing top builds to try and see every corner of this game’s possibilities, and I make very few endgame builds myself. Most of my time is spent doing HC runs that function like roguelikes, in that they are fast-paced, reckless, and just wildly different than most people play this game. I try to use underused leveling skills and that led me to trying a DW Oppressor with two Bonescythes, RF for consistent DPS and sustain, and BH nukes every few seconds. It was a super fun build, and when I heard that 1.1.9 had buffed the damage of BH (increased % Weapon damage scaling with rank to 270% by rank 16, 330% by max ultimate rank), I knew I had to make an endgame version.
Thanks a lot to @mad_lee for providing a lot of useful advice on optimization and making the build shine, and to @grey-maybe for providing additional useful insight regarding WPS and the like (as he is making a similar build rn that you should all check out soon!)
Special thanks to @Nery for his Bone Appetit! Vitality CDR Bone Harvest Oppressor, that made me fall in love with BH in the first place. 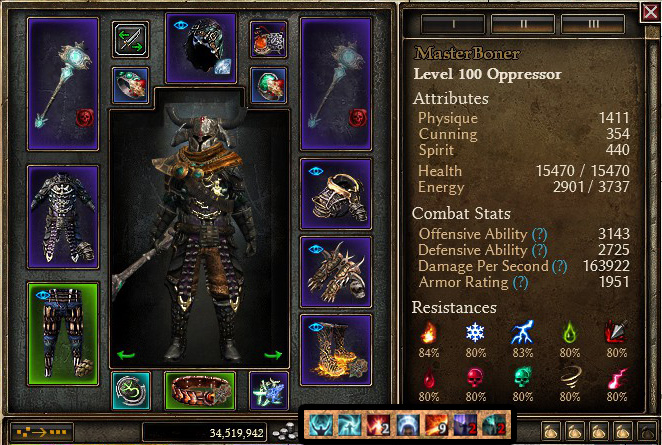 This build has a very pretty look to the skill rotation, which is something I can appreciate, and functions rather simply. When engaging a new mob, cast Aether Corruption, and then auto-attack with RF, using BH nukes when they’re off of cooldown, and try to keep Ascension up when you can. You then have Siphon for some additional -RR and sustain, and Mark of Torment for harder mobs/bosses/nemeses. Just note that the ADCtH is extremely high, both statically, and from all of the additional proc sources, so it’s imperitive to just keep attacking.

Scion of the Screaming Veil is the star of the show here; providing us with our conversion to aether on RF and some nice attack speed

The Bonemonger Set is key to this build’s functionality, and should not be tampered with

Magelord Rings are a nice boost to aether and provide one of the triggered effects that both make this build look cool, but also functions as an additional WPS source, which this build thrives off of

Other slots are not as crucial, and I’ve tried several medals, pants, etc with varying results. Greens are not required with these specific affixes, so there is no need to panic over farming the perfect drops

Although it is definitely possible (and fun) to level this build in a similar way to how it plays in the endgame; I have not written an extensive guide for it, so I would suggest looking at the legendary builder, @Nery’s Beginner’s vitality Ravenous Earth Oppressor with leveling guide as it is extremely thorough and well written. The build will have to level as vitality, regardless of if you used my version or his, so it’s entirely relevant.

This build seems to do well with most of the game’s content, and although I didn’t push particularly hard, a skilled pilot could definitely push deeper SRs

THANKS
Thanks to @mad_lee, @fretheo, and the Grim Dawn community. Special thanks to @Slev1n for his godtier piloting skills!

Great to see your build posted!

I like the aesthetics of Bone Harvest skill, funny enough I recently tried aether Binders, one BH Veilwarden set and Lucius weapon, the other was Agrivix set + same Scion weapon for CT oriented build. For fully blown BH, you could also try Temporal Blade. But aether Oppressor is very cool concept and both the set and weapon are enabling it.

GD stash is obvious but kinda easy to figure out a more reasonable spec as you mentioned. There are two very similar builds posted on the forum before, Duchy and RektbyProtoss have almost similar specs (but I think one of them went without RF)

The devotion map is interesting, I have that one saved (but with Stag instead of Eel) but had a 2H aether caster build in mind for it.

Bone Harvest is not that fun with 3s cooldown vs 1.4s (Oppressor)

I leveled with it.

Been a long time since I played BH, but it only uses main hand wpn dmg, right? So DW would only be for the cdr

aether Oppressor is very cool concept and both the set and weapon are enabling it.

In general, I like the concept of AA with a nuke, but there seem to be rather few builds like that in GD specifically. My battlemage, Alexei Trozanov, was my first attempt at such a build, using beronath and TSS. It was fun but baaaad. I think afanasenkov did it better with his devastation BM, but the class is cursed, so I’ve been trying to make this type of build on various better classes

Your bone appetit build is still one of my favs, as its just nuke-only and makes me smile

My battlemage, Alexei Trozanov, was my first attempt at such a build, using beronath and TSS. It was fun but baaaad.

You mean something like this [1.1.9.0] Eastern Devastation Spellbinder - meme physical sky projectiles (SR 75-76) ? But Battlemage?

The devotion map is interesting, I have that one saved

Took a lot of tries to get to where we did on that one. I like the feel of this one

There are two very similar builds posted on the forum before

I have seen the Duchy one, but it felt very unfinished to me, used no RF, or WPS triggers, had unfocused skill allocation, and had a lackluster devo setup. Never saw protoss’

How so? It is very well within the possibility of farming for a build to have two or less greens that fit your build. I intentionally tried to make this build with the average player in mind. Yes, the pants are a god roll, but arent necessary. The belt is only single rare, and very possible to obtain. I would prefer if people like you could stop looking down your noses at a stashed theorycraft. As I’ve said to you before, your way is not better or some holier vocation; it is merely different. Build is very easy to obtain legit.

You mean default attack replacer? WPS still triggers from regular “weapon attack” which is what is used between Bone harvests if you keep holding down the BH button (similar with ABB, scourge strike, etc). But all in all, agree. I think Duchy wanted to explore VM as a secondary “nuke” but I am not so convinced that it really is a good idea performance wise.

_25 BH Oppressor Start.zip (144.8 KB)
I make tons of these concept builds to try new ideas and starts. This one is fun. Basically it’s at the start of the game, level 25, with 25 devotions. Really lets me test out a lot of new ideas for my levelling runs. Enjoy

I was expecting faster, but 30 seconds?! Awesome stuff! Right around the kind of performance I was hoping for, for this build.

I guess it can run faster, but not so much-maybe 5.20-5.25. Damage is not so high and valdarans with reapers doing their job

I meant that I was expecting it to be faster than my run but not as fast as you got. I’m impressed by the run

Special thanks to @Slev1n for his godtier piloting skills! 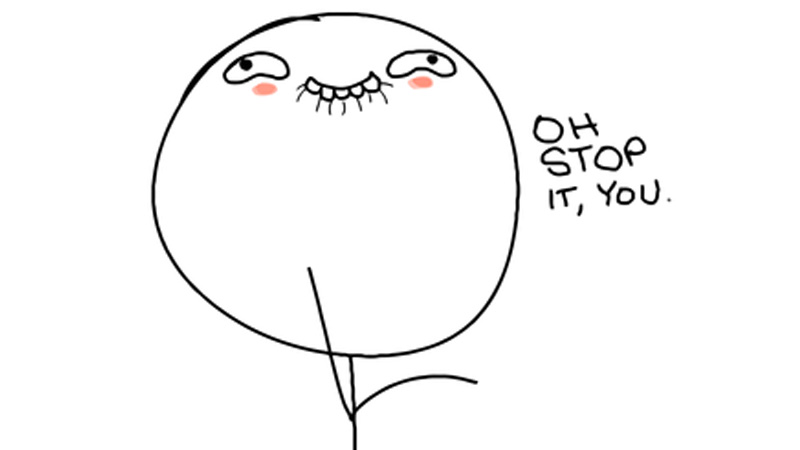 you, banana, plasmo, ya1, and roman sitting up there on mount olympus lmao

Making this build next!