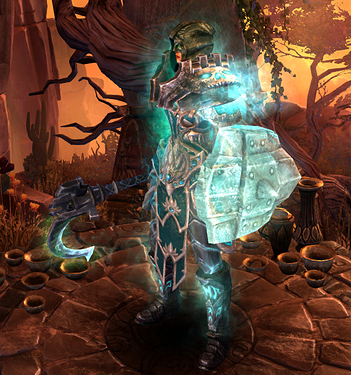 This is a fun concept build of a veilwrapped warrior, fuelled by necromantic investigation into achieving immortality, arcane wisdom and aetherial power. This build is an aether damage melee spellbinder, with magical defenses and debuffs, decent damage, and up to 7,000 regen.

It does use two MIs - one of them is fairly easy to farm (head to Crown Hill for the shield). The other is annoying to farm (Theodin Marcell’s noggin-whacker). But, both are attainable imo.

The build is currently set up so that Giant’s Blood is assigned to Arcane Will, so that it will only trigger when it needs to (when your HP has dropped below 75%). However, this may not be optimal - this build has died in moments (Cruci ~166) where it took so much spike damage from floor AOEs etc that within less than a second, after Arcane Will had proc’d but before Giant’s Blood did, leaving a window of unused devotion powers. 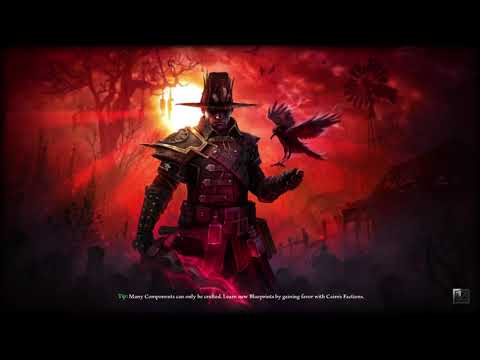 You can fairly comfortably alternate between Mark of Torment with it’s extended duration and Mirror of Eroectes to boost the build’s defenses on top of it’s Maiven’s Sphere + Ill Omen damage reduction combination. 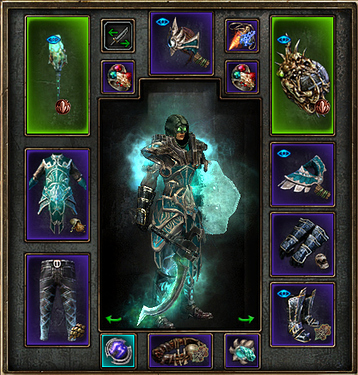 Hey, cool build! It’s nice to see an easier to gear alternative to the DW version of this kind of build. Congrats on a solid build.

Even with recent nerfs to regen, this build still gets up to around 6.6k regen

A guide to the devotion setup? Also how would u go around leveling such a build

Regarding levelling up - This build is so heavily dependent on endgame gear, I’d be tempted to level up by other means then eventually respec into this build. I personally would probably level up using Necro’s pets because it’d be fast and easy until you get closer to end game, and can get all of the pieces for this build.

just the order to taking them (what to remove etc) would be nice. thanks

Sure thing. Here’s how to get the devotion tree:

This is a really nice build that i wanted make myself. I planned a very similiar version based off of this, but with Aether Bone Harvest conduit, however, i was farming for “Warped - of Shattered Reality” affixes for weapon (anything less wouldn’t satisfy me) but no luck so far. And i farmed quite a bit. If i happen to find it, this is definitely on my radar.