A few days ago, someone made a comment on this spicy Saboteur build that maybe someday someone would figure out Harra’s set on Saboteur so I thought I’d give it a shot.

Turns out it’s actually not that bad. 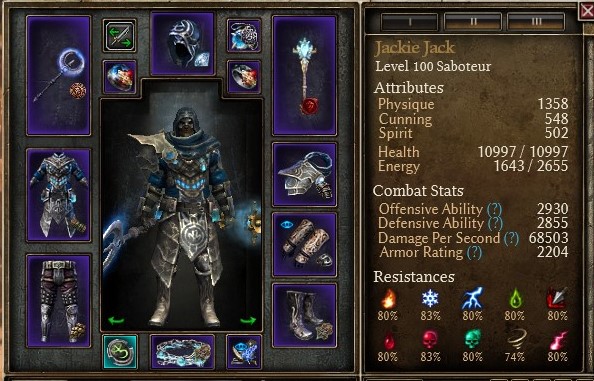 In game with permanent buffs and Pneumatic Burst

Crucible speed is ok-ish, but very hard to do 150-170 under 8 minutes. You could save a few seconds if you don’t jump in the spawning areas like me…

Jump in, throw Flashbang and Mines, spam Quick Jacks until Blast Shield wears off, nope out with Murmur’s Kiss, rinse and repeat until everything is dead.

We’re completely ignoring the Phantasmal Blades bonuses from Harra’s set as we don’t even need this skill to proc devotions. Crescent Moon is a no brainer due to the busted proc and +1 to all skills. Off-hand choice may seem a bit odd, but Scion of Bitter Winds gives us another source of rr, a good chunk of casting speed and physical resistance. The gloves give us a nice flat damage bonus to each jack, casting speed and resistances. The rest of the gear is oriented towards survivability mostly through blast shield support. Obviously Ring of Anubar would be better than Quickening Gem to hard cap Full Spread but I haven’t been able to get my hands on one yet.

This build has a total of 6 craftables items, not including the relic, so we can manage to get a decent number of smith bonuses. I went mostly for the Legion Smith for hp and aether/chaos resistance.

We’re putting as many points as possible in Stun Jacks line and RR skills. Max Pneumatic Burst for additional speed and OA. We’re also able to soft cap Phantasmal Armor. Flame Touched at 12/12 is enough, OA isn’t great after that. Dual blades is at 5/16 for the physical resist. 11/16 in Vindictive Flame is enough. 1 in Blade Barrier for panic button. I pushed Elemental Awakening at 6/12, after that it’s only 2% elemental resistance so it isn’t worth putting more. The remaing 2 points are put in Searing Light for additional Fumble.

Crown, Murmur and Ultos for RR, Yugol for damage reduction, Bat for sustain, Chariot for OA, slow resist and the defensive proc. Grabbing casting speed and cc resist where we can in tier 1 constellations.

Had an idea on how to take down Ravager while making dinner, here it is!

Added Crucible run. As expected, not amazing but it works.

Can I have a save file?

Sure but you’ll have to explain to me how to do that.

You put the char folder into a zip file

Then you upload that zip file to here, click the “upload” icon and follow the instructions there

this is result _ulvar.zip (130 Bytes) and someone can download it and put char file in his/her game folder and play it

Thanks, will check out once I get home!

Big buffs in 1.1.9.1, added a (sloppy) 2:43 Ravager kill video. Also uploaded a new version of the build since I finally got my hands on a Ring of Anubar.

Figured out that with the new built in sustain from Harra’s set, Bat constellation is no longer needed and adjusted grimtools accordingly.

Have you tried with the MI sword that would add additional 4% life steal on SJ?

Woah I missed that change. I have not tried it, nor do I know which weapon I would swap for it. Idk if the crit damage would make up for the loss of either proc. I don’t think I want to lose +1 all skills or 8% physical resistance though and I’m pretty sure I’d have to kite when Blast Shield is down regardless of how much adcth I can get.

took me 60+ runs for this stupid ring.

Really wanted to push the build to its limits, I recrafted almost everything for armor and physique. I was able to beat the timer for SR 85 (with pharma and lucky mutators). Fabius is hard but most other nemesis aren’t that bad if you’re careful. Also updated the screenshot.