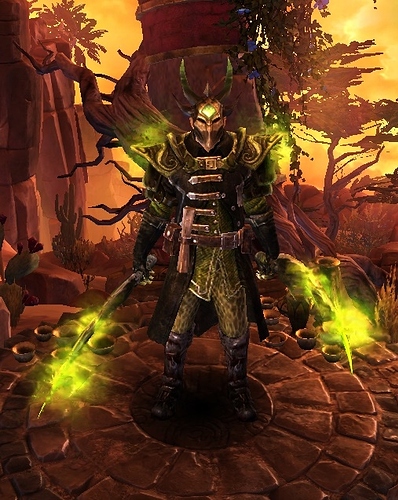 Hi everyone, I searched but couldn’t find up to date Dunefiend EoR builds so I wanted to share mine.

Images from the game with perma buffs and BoD

or maybe I did something wrong.

Nevertheless it’s a good build, very solid in farming range but struggles after SR 80. Has a bit energy regen problem but it’s managable.

Didn’t die in boss room but chunks were terrible. Also didn’t feel it can push further after a few attempts so left it there.

Have you tried Reaper’s Legguards to cap EoR and use Venomtongue Mantle for chaos -> acid conversion? With your amulet you’d get around 50% conversion for all that chaos you have through Witchfire, Wrappings and Possession. Maybe even take Abominable Might instead of Black Blood of Yugol?

. But what happened to character model at https://youtu.be/nUTpGd8WCHg?t=148? Does not look like “spinning”

Have you tried Reaper’s Legguards to cap EoR and use Venomtongue Mantle for chaos -> acid conversion?

Yeah, resistances become harder to balance and you lose stun resist and phys resist. But it can be better damage wise.

Thanks. Yeah there is a animation bug

it is keep spinning and dealing damage but until you stop and re-spinning it looks like stunned. Maybe related to this I don’t know Petrify disrupts Eye of Reckoning and force character to stop even though you still hold rmb