Greetings ! I’ve been having a lot of fun lately building my first successful hardcore character, so I decided to share it there. Last time I built around the Winter King’s blade, this time I decided to try this item Fleshwarped Bulwark which is available quite early (around lvl 30) and made the HC journey much easier.

grimtool link for my current regular setup
here is the dreamed version with perfect affixes (in my opinion) : click here 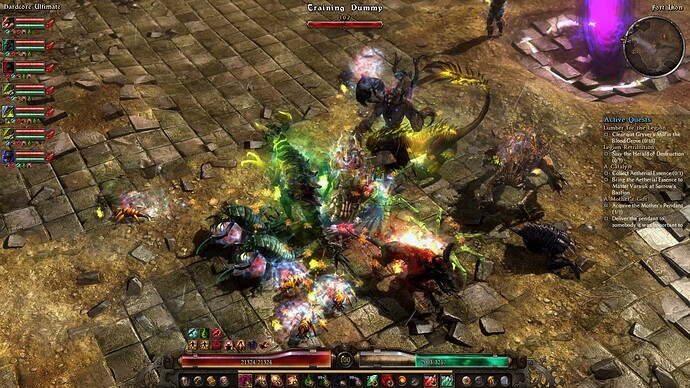 PetArmy21920×1080 385 KB
I tryed to take a picture with all the pets visibles, but it’s quite hard actually, these idiots are walking on each other

It is all about stacking a lot of flat damages (max lvl Blood of dreeg and Mogdrogen pact for example), and all about stacking pets who will capitalize on the aforementionned flat damages (up to 19 pets !). I chose acid conversion for 3 reasons : 1)I love Ghol set, 2)Blood of Dreeg 3) I wanted to try this Mythical Blightshard Amulet. It turns out that the build has a surprisingly high dps (higher than my expectations at least). Note that high conversions rolls are needed on rings, and to a lesser extent on the amulet (if you want 100% phys to acid conversion, it is possible with this scepter : Mythical Blightstone Invoker, but you’ll lose those 3 cute little chtonics

On the defensive side, we have around 20k hp, 60% phys res, 2k7 HP regen (4k4 when behemoth + earth ward procs). You are obviously not immortal, but you are resilient enough to actually see death coming, while having enough time ahead of you to deal with it.

I had some cold sweats in SR when suddenly my buffs are dispelled (I assume it’s the same kind of attack as Grava, but I can’t identify which mob does that, which is annoying…edit : it turns out that the culprits are Arcane Heroes, thanks everyone !), and if your pets start to die, it’s kinda hard to resummon them while keeping other pets alive, its like a vicious circle. That said, all in all, I rarely felt in danger with the build, while destroying almost everything on my way.

Performances :
-Celestials :
Bourbon and Lokarr are easily handled by the build (around 20 sec on average for the later) :
Fight vs Lokarr 15sec

and here is the fight vs Crate :
Hesitant firts attempt vs Crate

Ravager of minds :
you can defeat him with the regular build in around 2min-2min30 (you’ll have often the aggro though, you can handle a couple of hits even in berserk but you’ll have to run a little from time to time to recover life), but with little adjustments (like lvl 17 in groundslam) I manage to do it in 1min28 :

)
Grimtool Link for Ravager (basically dominator prefixe over taskmaster on legs, 17 on ground slam over primal spirit, and def augment on useless res against him)

Mogdrogen (video soon) :
I don’t have the recording, nor did I time it, but judging by the reminding timer on consummables, it took about 2min30. I’ll soon upload a vid and the adjusted build for Mog.
edit : I just figured that you can fight him only once ><, so no video, but here is the setup I used : mogdrogen spec

Callagadra :
I don’t know how in hell am I supposed to fight this

), my pets are crushed in a blink of an eye, despite them having 80% pierce res and 63% phys res. I am probably missing some important strats about her, any advice would be gladly appreciated.

When I decided to record a few runs to see just how long it took me, I was so happy to see that I took about 5:30, with a personal best at 5:20. HOWEVER, that was before I noticed that no one was actually using the consumables in the runs shown in the various builds I looked at, and so I felt a little sheepish…

That said, here is the run for those who are interested (I play on a controller, so, sometimes there are dashes that don’t go exactly where I want^^ ) :

Cr150-170 4 blessings -1 Vanguard banner -full of pharma 5min 20 (pharma used : all the royal jelly things for extra regen, the two ugdenbog juice things that give +HP, the Mogdrogen Elixir for pet total speed, and wrath of the beast tincture+ the tincture that pop a pet during the fight)

I’ll try to do and upload a clean run without using pharma, to see the actual performances of the build. But what I’m sure is that you can chain 3 standarts runs before blessings fade, even without pharma, I did it several times.

The build can consistently go through SR 75-76 without trouble, in 8-14 min depending on the maps/mutators (11-12 min most of the time). Don’t aggro the whole map, though…and be extra carefull if there is a lurking Alex, he can be deadly to your pets+he has a huge poison resist, and I suggest you to take anti freeze consumable if there is Moozi.
At the moment I only pushed a 80, without trouble, I plan to push further when I’m done with the character, to see how far it goes and seek a glorious death^^

My man, your ravager video is private! Please unlock so we can bask in the glory.

Oh sorry, I didn’t know I had to unlock it !
It should work now.

I had some cold sweats in SR when suddenly my buffs are dispelled (I assume it’s the same kind of attack as Grava, but I can’t identify which mob does that

Callagadra :
I don’t know how in hell am I supposed to fight this

I am probably missing some important strats about her, any advice would be gladly appreciated.

Easy, I will tell you

Seriously though, Cally is just Anti Pet in general and will kill them in seconds unless you go all in on pet defensive stats {at the cost of killing callagadra taking like 30+mins…(though that time was for near immortal Briarthorns)}, or… Reap Spirits

Oooh so it’s not a peculiar mob, but an hero affixe ? And does the attack have the same look than Grava’s one ? A red orb ? Anyway thank you so much, I’ll pay extra attention to them now

I think I’ll give it a try this week end, we’ll see ^^ (have to pay attention to those maggots even before facing Crate)

Seriously though, Cally is just Anti Pet in general and will kill them in seconds

Hmmm so there is no easy adjustment, kiting her a little an constantly resummon my main pets is part of the fight then, I’ll try again but I’m not use to resummon quickly a given pet in the middle of the fight, have to learn to do it smoothly.

And does the attack have the same look than Grava’s one ? A red orb ?

Arcane Heroes and Nulli heroes will also be “telegraphed” through visuals; they are a deep purple colour, even Mageclaw is purple

Arcane Heroes and Nulli heroes will also be “telegraphed” through visuals; they are a deep purple colour, even Mageclaw is purple

Thanks ! With all those infos, If I ever get hit by this thing again, I can’t say I wasn’t warned ^^

I’ve made a similar one (using Fleshwarped Bulwark) for the Community Season 2, only as Ritualist, but still missing a few items.
I’m using a Scorpius Pummeler which for pets converts all physical damage to acid all by itself (sadly only Conjurer’s prefix would give you plus skill points to Briarthorn+Hellhound).

I have also considered farming one, but if I’m not mistaken, it only converts Briarthorn’s physical damages to acid (and blight fiend if you’re a ritualist ofc), or have I misunderstood the text ?

I made a mistake who might kill me and used an aether cluster in the panic, but at least I’m still alive and Crate is defeated

I made a mistake who might kill me and used an aether cluster in the panic, but at least I’m still alive and Crate is defeated

Was the journey through the sandstorm hard? Cause I remember I had to burn 3 clusters when I attempted Crate with Ritualist.