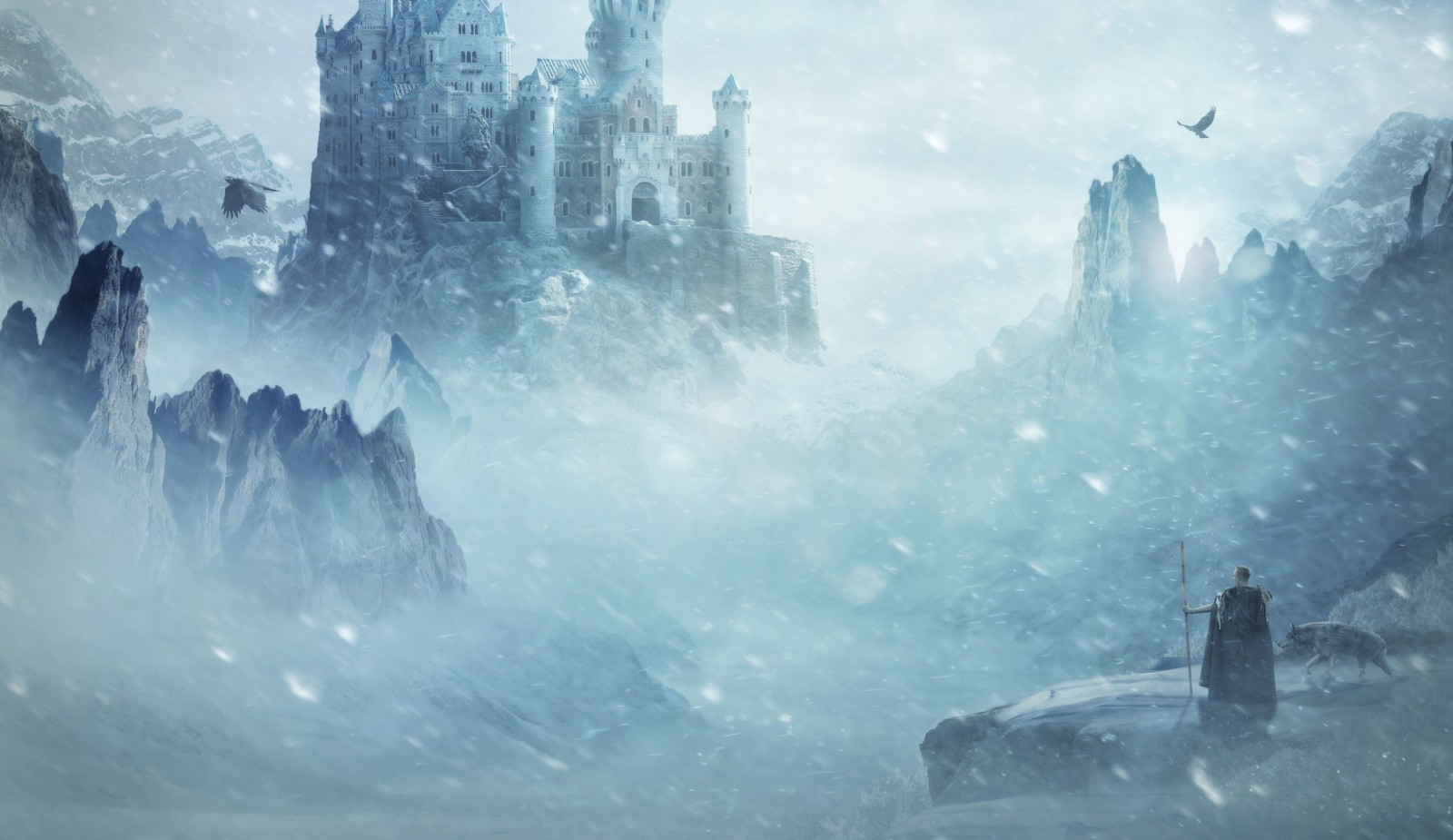 Northern lights were flashing in the sky. Inquisitor was taking his daily nap which sometimes transformed into a deep night slumber. His sleep was disturbed only by an occasional nature call which was helped by a contraption that Luminari healers made for him and that he kept under his bed (he lovingly nicknamed it “my wet duck”). Malakor was rarely seen in the court nowadays, rumour had it that he was working on a project of a new city ruled only by church and Inquisition. The rumour was mostly spread by Inquisitor himself as it seemed like almost nobody cared about building new settlements and more people were becoming concerned about the balance of magic in Cairn, deeply disturbed by Inquisitor’s own actions.
“Sire, we have reports of a rogue ice mage, roaming Arkovia”, reported one of his faceless servants, a part of once elite group, of which only few remained these days, almost as old as Malakor himself tasked mostly with cleaning up his chamber and taking care of Inquisitor’s favourite “wet duck”. “Are you bloody jesting, you old fool, Olexra is long banished from this kingdom, I’ve signed the papers. I’ve even expunged that bastard from Cairn’s registry myself, signed and sealed!” Malakor suddenly felt his age as his blood pressure began to rise. “Sire, it’s not Olexra”.

No Morgo gloves for full conversion?
OA bonus from Easter combo is better, I have tested it.

DA looks super low. What’s up with that?
There are no meaningful ways to amass decent DA on a Druid without making big sacrifices which will ultimately mean worse survivability. This build compensates low DA by huge hp regen stack and multiple fail saves.

That double rare off-hand tho
Single rare will suffice. You MUST roll physical resist and casting speed on it tho (like “Glacial … of Celerity”)

Skill distribution is pretty standard but the devotion route is pretty conservative however: it was designed in a way that allows fully offensive setup and full Spirit dump. Most gear pieces should be easy to farm, off-hand might take a bit of time.

In Crucible build can facetank almost everything, however, you should be aware of your Mirror/belt proc cooldowns and use Nullification frequently.
In Shattered Realm It’s actually pretty easy as you can play from a long range.
Just watch the videos to learn how to play the build. 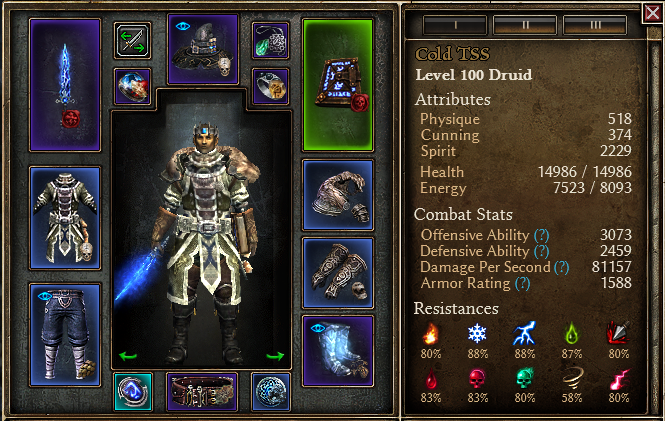 As the winter was coming to an end Malakor’s daytime naps were getting shorter as he was getting more wary every day. The reports of a new rogue ice mage didn’t lead to anything but Inquisitor’s increased anxiety. He has signed a decree banning new rogue mage from Cairn long before that rogue could even reach new borders of the kingdom, although Inquisition’s outposts at the border were reporting multiple massive blizzard storms at the last reported location of the mage.
“Well at least someone stays loyal to me till the end” - said Malakor to his “wet duck” contraption as he was putting it away and preparing for another daytime nap. That day he dreamt of frozen popsicle sticks that his mother used to buy him when he was just a little kid.

Shoutout to @Plasmodermic and his original cold TSS Druid ([1.1.5.1] Cold Damage Strikes Back - Cold non set TSS Druid - 5:15 Crucible [g4][c+][vid]) and to @nofika4u for his brilliant suggestion to use Tinker’s belt.

Good job for the great setup! Genius idea with that belt for keeping non wd% builds alive. Can say i played this toon myself and its by far one of the tankiest casters out there.

In terms of damage, defensives, gearing, and devotions how would you say this build compares?

Lee wrote everything, I quite literally only pressed the Post Thread button.

Some people hire ghost writers but from today on I have my own ghost builder.

This build is so rad. Been playing it a couple weeks and really loving it.

This looks really interesting and I’d like to use it but am unsure on the best way to level it. Does anyone have any tips?
Cheers

Develop Trozan / Arcanist, farm items somewhat as in the following guide and use Wind Devils / Storm Totems as additional DPS / devotion proccers. But follow devotions from the OP.

[image] Introduction Welcome to my first Warlock guide intended for new players or SSF enthusiasts ! The thread guides you through the not-so-easy levelling of one of the most powerful caster builds of the game, provides cheap lv100 setups you can use to farm your gear, and various links to end-game specs for you to later transition into. It is made for levelling in softcore, solo self-found, without veteran mode toggled, and with both expansions. To remain concise, basic mechanics (dev…

Nice, thank you very much.

Op is cold not lightning. So already better in my book. And less buttons.

guess i am switching

Hi Stupid_Dragon hi forum! I am beginner in the game. I really like it trozan build. My SSF first character https://www.grimtools.com/calc/qNYbPK72 . That would be my question with the build. Relick as it can be replaced /what is the budget option? Maybe Iskandra’s Balance is good? Thanks for the helpful answers

I’ve been leveling/playing this too and didn’t have the Eternity recipe until yesterday. I used Serenity first then Iskandra’s Balance (when i got that recipe). You’ll probably have to change your attribute allocation since Eternity (AND the belt) will let you skimp on physique.

Thanks for the help

Unfortunately the serenity blueprint is not there. I have Iskandra’s Balance blueprint

Hi Stupid_Dragon hi forum! I am beginner in the game. I really like it trozan build. My SSF first character https://www.grimtools.com/calc/qNYbPK72 . That would be my question with the build. Relick as it can be replaced /what is the budget option? Maybe Iskandra’s Balance is good? Thanks for the helpful answers

I doubt there’s a relic that could compete with Eternity so while replacements exist they would be just temporary placeholders in the end. Iskandra’s Balance would certainly be the second most reasonable after Eternity.

Thanks for all the helpful answers

Hello, I’m a fairly new player, I just started on this build as my first build, are you able to explain a bit more on how to get the devotions in your build? Thanks!