Templar apparently lost his driver license for good so he had to walk the rest of his journey. 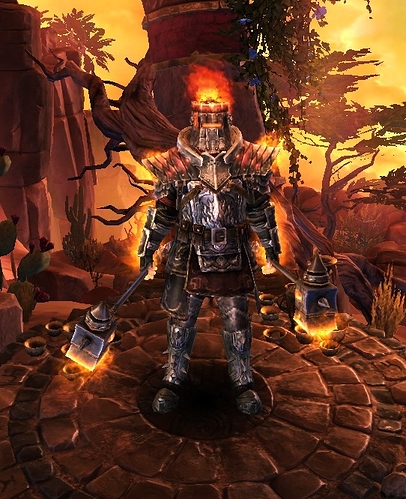 Hi everyone, after Cyclone EoR Shieldbreaker I’ve decided to give Alladrah a shot. I examined Paladin and Shielbreaker variants and found them squishy and hard to balance stats, then decided to use Arcanist as support mastery. It has racial damage, damage absorption, OA, CC resists and more. Not sturdy as Cyclone but I reached absurd dps values despite low RR, in the end it worked fine.

Grava/Kuba + Iron Maiden + Fabius/Gargabol = better quit because all these require a lot of kiting. Grava is not hard due to high racial but IM and Fabius can one-shot you a lot.

Build is reliable in farming range. Not fasters&safest 75-76 farmer so sticking 65-66 is better.

Thanks. Yeah I checked your builds aswell. It’s definitely noticable in SR 80+, some high resist monsters takes too much to kill. Needed to fish mutators/bosses to record 85 run for example. Resistant mutator is definitely unwanted.

Also did a lot of 75-76 runs, only problem is Iron Maiden since build has no human racial damage, Grava is much easier due to %20 racial damage. I died a few times to hard hitters so can’t say that build can do 75-76 blindfolded but it’s adequate to farm.