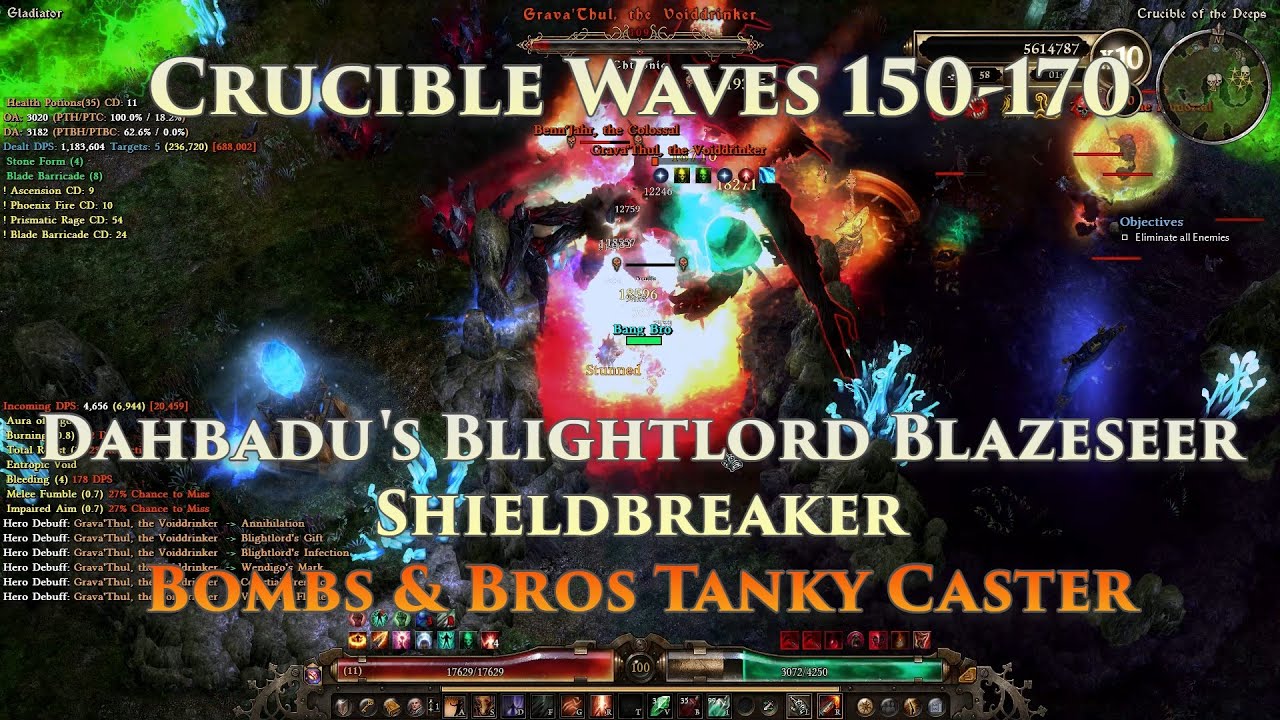 You’ll need all the different expansions for the gear. Use Grimtools to determine drop locations of gear and components.

You’ll be using Barthollem’s Gavel (a 2-handed mace that you can target farm) for most of the character’s life.

Although I talk a lot in the video about shields, avoid investing in devotions and skills that are shield related while leveling to avoid pigeonholing yourself with gear choices.

While leveling, focus on resistances, armor, and making sure you have enough energy regen to power your spell spam. Many times a green or even yellow piece of gear is worth it if it’ll max out a resistance or shore up a weakness.

If you look at the level 50-65 example, that will give you an idea of itemization to shoot for while leveling. It also contains some legendary (purple) items that are great for enabling other mid-level builds, so try to collect them.

If you can’t spam your blackwater cocktail, fit in more ectoplasm components as soon as possible. If that means you lose out on other stats from components, that’s fine.

You Flashbang a group of enemies, which debuffs them and also places Eldritch Fire on them.

While enemies are coming to you, blanket their pathing with Blackwater Cocktails and place Thermite Mines in locations it feels they’ll linger in. This will tag enemies with Wendigo’s Mark, so you’ll be life leeching them.

You have 4x Bros, Thermite Mines and many other sources of resistance shredding. You’re converting most of your damage to fire and you’ll do a ton of fire damage. Your crits hit really hard too.

When you get hurt (knocked below 60% life), you’ll have several seconds of near invulnerability due to Blast Shield and Resilience proccing, which should give you time to recover or reposition. You’re pretty tanky, have some decent block mechanics (near end game), and decent sustain (mostly from life leech mechanics). You’re not a super tank, but just “tanky enough” while being able to melt the screen with some serious firepower.

The build could be tankier. It’s not like you can facetank several nemesis mobs without ever moving. You can tank a couple at once, but not the entire screen filled with them.

It would be nice to have another means of curing debuffs on you, but Ulo is fine given your defense profile.

There will be a transition near the end of the game where you’ll switch to shields, once you have enough devotions and have collected the gear. This may be tricky for some to make this switch, but you can always continue to use Barthollem’s Gavel and progress the mid-leveling concept of the character to end-game until then.

If you’re not using shields, feel free to get creative at the end-game with devotions, because you’ll have some points to spend.

Feel free to ask any questions and I’ll try to provide helpful feedback.

how far do you think u can push in SR?
what do think of the biggest difference with pyran set?
btw this build looks really cool

With the holiday, I plan on releasing more videos and doing more content. Pretty far and fast, but you gotta be careful about pulling a ton of bosses at once with this build.

Basically, some of my character’s I’ve done everything, and some of them I’ve just done “most” of everything, and I can judge if they can do X based off of how well they can perform doing Y, since I’ve done X before several times and know what’s involved. I like Crucible because I think it’s the best overall test of a character, and how well a character performs there you can get a good idea how well they will perform in other scenarios.

I’m interested in making more videos. What character would you like to see kill which Celestial? Of note, some of these builds I may use some potions vs a Celestial – unlike the Crucible.

What character would you like to see kill which Celestial?

I don’t need you to prove anything to me, it’s not a big deal for me but I suggest writing what you actually have done with your builds so that we don’t have to trust your guesstimation. Just look at other build threads or YT channels - players, even well-known on the forum, put a lot of effort into testing their builds thoroughly, make many videos and fight all Celestials if they advertise that. Also it’s good to have those videos because you can see for example how much kiting / skillful gameplay is required (i.e. dancing with Ravager vs just facetanking).

We regularly see players asking for builds that can clear all the content. I think it’s reasonable to only recommend those for which it was actually done.

I’m not experienced enough to tell a precise Celestials hierarchy (I doubt you could make one) but Ravager, Crate and Callagadra are definitely the stronger ones and Clones, Lokarr and Mogdrogen are the weaker ones and can be skipped I think if the former three are beaten.

Crucible because I think it’s the best overall test of a character, and how well a character performs there you can get a good idea how well they will perform in other scenarios.

It depends. I had immortal characters in Crucible that I don’t think would ever be able to kill the hardest Celestials. There’s an anti-Crucible sentiment in some part of the community, I don’t think they feel Crucible is a proper measuring stick for a build’s strength.

But I see in your video that you beat Crucible without any Blessings. It’s definitely an achievement and a sign the build is strong. There’s even a special category for something similar in GrimSheet: Endgame Build Table - ETE edition [v1.41] called “Naked CR”.
I’m personally not experienced with it. Perhaps it transfers well to Celestials.

Of note, some of these builds I may use some potions vs a Celestial – unlike the Crucible.

Potions vs Celestials are totally fine and widely used and I think you can use all of them. Even adjusting builds for a particular Celestial (the most common and easiest being adjusting your augments for overcaps) is common with changes that are more or less practical to make.

Hello, new player here following your build.
At level 30 at the moment with most points on Demolitionist. You don’t specify but how about skill point distribution, what skills to prioritize on that. At which point should i start investing points on Oathkeeper tree? In the Devotions, which are the ones that should be enabled first? Also, when should i start thinking about a Shield?

Sorry for all the questions, just trying to get my head around it

Don’t be sorry, those are excellent questions and thanks for posting.

Here’s an example of itemization and pathing for the skill tree and devotions: Shieldbreaker, Level 35 (GD 1.1.9.3) - Grim Dawn Build Calculator (which I’ve included in the OP above)

If possible I’d love to see videos of this character killing any of the celestials/superbosses.

Thank you for the effort on even making this guide a bit more new player friendly. I think you have replied to all my current doubts. If i have more i might return here and fire away.

I’ll try to work on that.