I wanted to make an Acid / Poison Shadow Strike Witch Hunter on a budget ever since I saw the Rift Scourge Slicers. Seeing @fordprefect post their Dunefiend Witch Hunter build inspired me to actually play and level one based on Monster Infrequent, guaranteed drops, and faction items.

This build has fairly high single target damage, high mobility, and interesting defensive layers. It is NOT tanky and does not do well surrounded by enemies, but is quite effective against isolated strong enemies.

I played this chararacter on veteran from 0 to 100 solo self found except for faction writs. So it should work without them as well. Also, this guide will have spoilers in it, you have been warned. 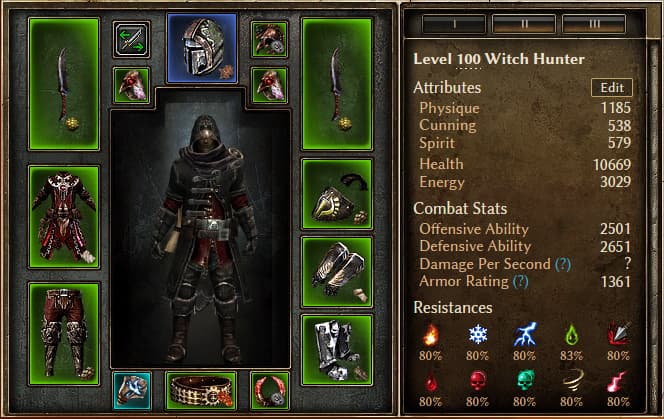 This looks like it has low OA, but you can get pre/suffixes on the following items: Weapons, Rings, Amulet, Pants, Belt, and Medal. So mix and match components and augments to have overcapped resistances and higher OA/DA.

Build with mediocre gear and rolls: Grimtools
Image with Blood of Dreeg and Pneumatic Burst active 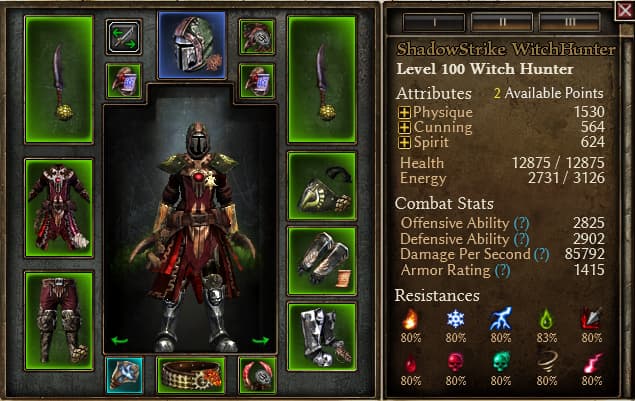 This is an intentionally nerfed version of the character since I had found some very nice Rift Scourge Slicers and didn’t want that to skew the results.

Build with best rolls I found, used in my first SR65-66 run: https://www.grimtools.com/calc/eVLokLP2
Image with Blood of Dreeg and Pneumatic Burst active 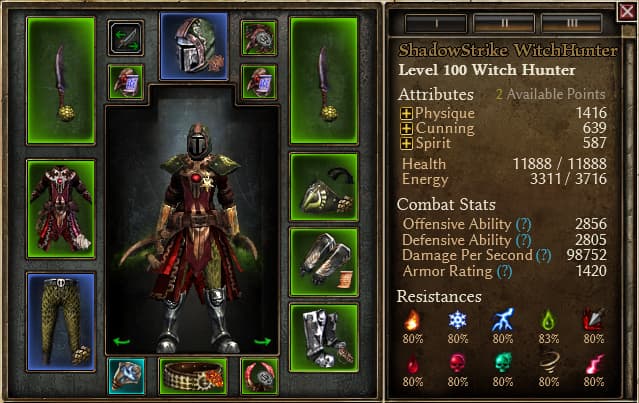 Those of you with sharp eyes will notice that one of the rings is missing an augment in the grimtools. I only realized this after the run, so the performance could have been slightly better with more OA or DA. The picture reflects the increased OA from the missing augment.

Curse of Frailty the enemy, Shadow Strike in, activate Amarasta’s Blade Burst for bonus damage, then Ring of Steel for some AOE.

After that, if you are surrounded by enemies, hop out of the pack. If not, keep debuffing the enemies, buffing yourself with Amarasta’s Blade Burst, and keep doing damage with Shadow Strike and Ring of Steel.

This set of devotions was copied directly from @fordprefect Dunefiend Witch Hunter build. The order is mine to reduce the amount of backtracking when putting points in.

Aspects for newer players to note:

We have 16% total Attack Damage Converted to Health from Revenant, Ghoul, and Yugol. This means you do not need to find ADCtH from items or components once you have all 3.

I did not take snapshots of the build while I was leveling, but here is the general approach I took. I will make note of which skills I find important and why, as well as relevant gear once it becomes available. More details for the gear can be found in the Gear section. The gear in the leveling section is not always at the correct level except for Faction Gear and Fetan Mask, but you can always farm an on level versions of it.

This build only uses Monster Infrequents, guaranteed drops, and faction gear. Given the limitation, I am very happy with how it performs. It has cleared all the skeleton key dungeons, though I don’t have footage of it. I did record 2 SR65-66 Ultimate runs:

Solo Self Found SR65-66 with weaker gear, and effectively no relic completion bonus just to show it can be done without great rolls on items. I died once in this run, but I also didn’t feel like rerolling scary mutators for this char like Time-Warped (25% reduced enemy cooldown) and Afflicted (-15% health), so it seems reasonable to complete without dying. Beginner Acid Shadow Strike Witch Hunter SR 65-66 (1.1.9.5) - YouTube

I have not tried any celestials, but I think this build is too squishy for them. I will update if I try.

Finally, a Beginner’s Witch Hunter. Great work with the guide (and the work invested in the write up)