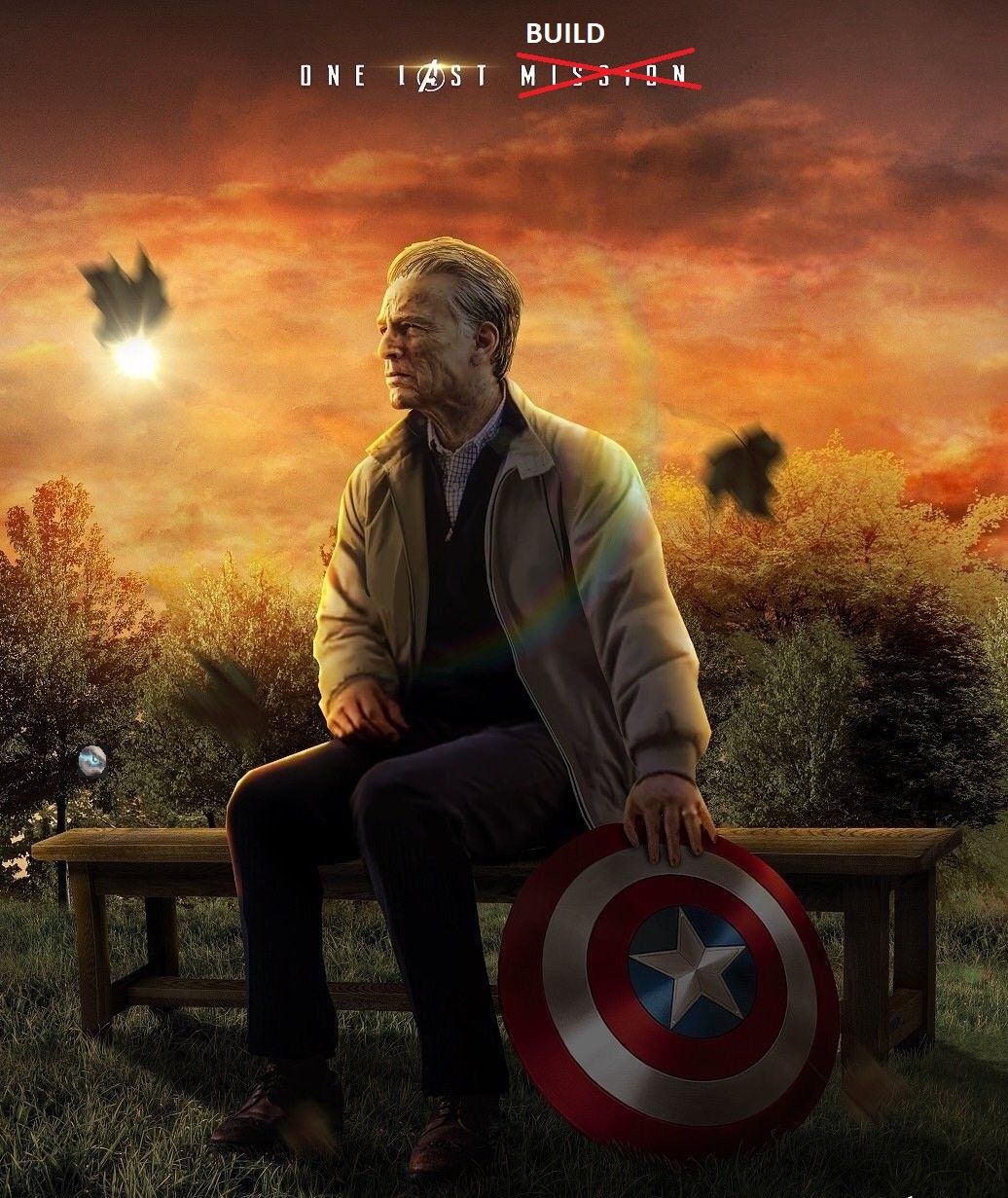 *True retirement is just around the corner

**Credit for the picture goes to Connor on Pinterest

Ah yes, Aegis of Menhir, you always come back. Just like my love for making and min-maxing builds - pulling me right out of retirement. Although the real reason to break my retirement was a builders community project codenamed “Top20 builds” and dedicated to finding and ranking top (~20-30) strongest builds in Grim Dawn. Keep your eyes peeled to the classes and builds section of the forums since the post is coming soon. And this little retaliation soldier is just a sneak peek.

Why Path of the Three and not Stormcaller’s Pact? Surely some crit damage and some direct damage support would be good here.

Build has multiple retaliation buff auras with a cooldown. Cooldown reduction speeds them all up. All while extra crit damage or a bit of direct damage per cent adds very little.

Why no retaliation augments in jewelry? And why double Frozen Heart in rings?

From my tests OA from Osyr’s Wisdom jewelry augment scales better than % retaliation damage and OA is really hard to come by on Archon that doesn’t use Savagery. Frozen Hearts serve two purposes: main one is to cover cc-res so our aegis spam gets interrupted as little as possible, second one is not to use Crystals and Topazes to keep our DA as low as possible.

Wait what? Did you say you are keeping DA that low on purpose here?

Exactly. Something I found out while figuring out and trying to min-max multiple retaliation builds: one should try and max out all of one’s defenses except DA (and fumbles/dodges). This way you kill melee targets much faster.

When it comes to gear most items are pretty much locked but there is some leeway here and there. For example it’s possible to use different pants/chest/shoulder/helmet even gloves, like a 4 piece blue Dawnguard set can be a cheap alternative here. Same goes for the belt: any retaliation belt will do till you find the blue one. A medal with adtch to Aegis is also an option, but it’s worse than Ikrix one. When crafting green gloves it’s mandatory to get a casting speed suffix, affix can honestly be anything.

Devotions are pretty standard for a retaliation build that has flat resist reduction from gear.

Skill distribution is also pretty standard, except for the exclusive skill choice that I explained above.

For leveling please check beginner guides, this is an endgame build

SR 75-76 is basically a main campaign level of difficulty for this build. It can routinely pull together most boss combos in boss chunks. However, when jumping into big crowds watch out for arcane heroes. Also, pack of healers that spawn with extra elemental resistance gear can be pretty tedious (I usually just skip them for speed). SR 90 was pretty easy too, SR 100 will require quite a bit of pharma plus some smart piloting.

Ravager is pretty easy and can be done without pharma (but better use it just in case).

Callagadra facetank is pretty sweaty and requires all the pharma you can find plus careful cycling through your absorb auras.
Crate is the one (stupid) boss that this tank can’t kill (I gave up after 15 deaths): it doesn’t take damage from our retal plus boxes multiply exponentially from shield bounce.

Watch the videos to learn how to play the build.

General (taken with Judicators proc and Ascension up) 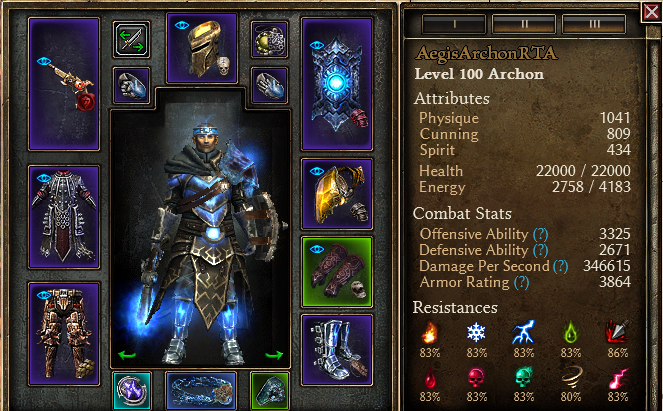 Wait for the post with the top 20(30?) current strongest builds, it’s gonna be fire, I promise. And this is gotta be it for me, for real for real this time. Just had to share this little retal monster with the world.

Here are some specs that I have discovered/min-maxed while exploring retaliation meta. All of them are viable complete builds, just not strong enough for me to post as separate guides.

A gimmicky build that actually works. Damage is not amazing but it does most of the game’s content pretty reliably. Even facetanks Ravager.

A take on Sentinel of the Three Warlord. Blitz damage is actually 30% Cold. Cooldowns on both Vire and Blitz are 1,5 seconds. A really exotic take on popular physical damage Blitz Warlord. It farms all content but is held back by the nature of single RR Acid.

My take on Hellborne Paladin. Build is decently fast, but obviously not as tanky as your typical sword and board retaliation build. You can use green rings and take Rhowan’s Crown in devotions for more single target damage.

Threads without comments are sad.

Grim Dawn: the farthest frontier. These were the voyages of Mad Lee. His five-year mission was to explore strange new builds, seek out new items and buffs and to boldly go where no builder has gone before!

I have this build, i didn’t play it throughly. This is the only build that i can’t credit myself as i own it cause, while i have many inspired builds from community, this particular one is mostly copy pasted cause i couldn’t find many improvements myself. Anyways here is mine:

Care to elaborate why 4% lifesteal medal is worse? Build has baseline 3% lifesteal which is quite low but 7% is decent. The build i copied also used something else but can’t quite remember. I prefer Dawnguard set but i’m not certain it is better (didn’t bother do the math). There is a good chance that +1 skills on my belt is not really necessary so that blue belt might be better, but it probably breaks my resists.

Your sheet damage looks crazy, mine should be below 300k. Just by looking, i’m not sure what could possibly made that much difference. Good job.

In any case, my version works great and i consider this build a bit busted honestly. Yours is probably even more busted. Do you know whether it is related to converted Retal damage buff bug (?) that is supposed to be fixed next patch?

Always hesitant to play a lee build, simply because it’s so well optimized and the top cr runners pull great times so the chance of nerfs are high.

But masterfully done, as always.

Care to elaborate why 4% lifesteal medal is worse? Build has baseline 3% lifesteal which is quite low but 7% is decent. The build i copied also used something else but can’t quite remember. I prefer Dawnguard set but i’m not certain it is better (didn’t bother do the math). There is a good chance that +1 skills on my belt is not really necessary so that blue belt might be better, but it probably breaks my resists.

Retaliation medal gives more damage and passive defenses (including Resilience mod) it offers scale survivability better than adtch from the aegis medal. You can watch videos from my sr runs or play my spec yourself to see it.

Your sheet damage looks crazy, mine should be below 300k. Just by looking, i’m not sure what could possibly made that much difference. Good job.

Sheet damage is enabled by more retal centric devotion map which you are missing in your spec.

In any case, my version works great and i consider this build a bit busted honestly. Yours is probably even more busted. Do you know whether it is related to converted Retal damage buff bug (?) that is supposed to be fixed next patch?

My version doesn’t rely on retal damage conversion bug - I don’t have any spirit investments on it.

you said that this isn’t a starter (I guess that’s obvious heh), but would there be any builds you could recommend that could transition to this in the end game?

Archon should be trivial to level up with Primal Strike.
If it has to be Aegis then levelling up as fire Aegis with Colossal Defender shield should also be possible.

Thanks! i’ll give primal strike a go. Been years since I’d tried it.

You may just have to make another Archon; PS is super fun!

HI! this build needs a range one hand weapon only? Or it can be replaced for a one hand melee? Good build by the way!

Does something with controlling the character bothers you that you’d like a melee weapon instead?
The pistol is quite important, converts a lot of Physical Damage to Lightning and no other weapon can do that.

Im referring to play the build until I get the item, like to play with something else (another weapon instead) while leveling. Sword and board type.

Hello, this is how I went through it lightly with one shaman. Just note that my final collection is very different from the walkthrough and presented here, because mine is better ))

Hello, it doesn’t matter what weapon it is with this option, it matters what bonuses it gives, since the Aegis will be spam! Mine is even better

There, it is important first of all to add retaliatory damage to the skill ))

Who has time to make a 3 hour video about a build, let alone watch one

aboslutely love this build, my strongest char yet and very pleasent to play. needless to mention I’m not that experienced in the game and could never come up with a build like this on my own, so thank you for sharing.

How would you feel about replacing Eye with Serenity for HC?

I played this build in the the season 4 league, but got wiped by arcane mobs in SR 65 (not paying attention, thought SR65 was auto mode, woops) (also didn’t have boots or vengence ring yet).

This is the answer from @mad_lee:
“Hi,

Build is already extremely tanky to the point where taking Serenity will actually make the build worse since we are losing way too much damage and thus adtch. It will also make dangerous fights longer. So I would not recommend.
Regarding Shards in League: I have heard that they are balanced differently there, so can’t really say vouch for build’s performance in League content although I imagine it should do okay.
Arcane mobs is something that can only be countered by careful piloting, I even specifically mentioned them in a guide.
I also want to re-iterate: to get advertised performance you should replicate the build as close to my grimtools as possible. Every component and augment is there for a reason.
Good luck in your GD endeavors!

Arcane mobs is something that can only be countered by careful piloting, I even specifically mentioned them in a guide.