Hello everyone. I had made this character a while ago and it was pretty mediocre before 1.1.9.6. But now, with the significant buffs to Consumption of Agrivix and fire retaliation in general, I was able to achieve decent results. 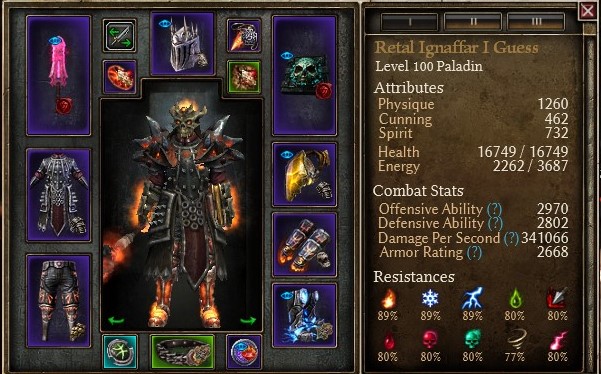 Dps with all buffs and procs active

It was a hard character to “optimize” since retaliation gear typically has bad OA and resistances as well as little to no casting speed. Retaliation without a shield is awkward to build.

Any comments and feedback welcome.

This looks very interesting, I’ve tons of off-hands that I’ve been looking for an excuse to use, and I haven’t seen any builds using Agrivix for a long time. Your build uses a lot of stuff that’s been gathering dust in my stash, especially since retal was nerfed a couple years ago. I’ll positively give this a try and play around with the devotions too.

Great stuff! I had something on the backburner for this too once the buffs come in, but it wasn’t coming together as nicely as this.

Just wondering though, why that armor ? Instead of, say, Divinsteel hauberk ?

Edit: Nevermind, I’m an idiot and commented before actually reading the build…

Great job! Can I take this as a reference to my topic in Ideas and Feedbacks?

Sure you don’t need my permission for that.

How can i level up this build?

I know one person from Discord was leveling Fire Flames of Ignaffar Paladin and another one was making a leveling guide for it. You could ask for tips there. That would be the most resembling the OP and devotion of this Retal FoI is fine for that.

As far already existing guides are concerned, you could use these ones:

Here are some posts about leveling with Fire Guardians:

Thank you for taking the time to answer and it has helped me a lot, I will follow this advice.