The forum became so desolate, build topics so rare. This is not right. At least untild GD2 comes out

. I still have many builds to share and here is one of them - Dawnbreaker Vindicator.

Why not Warder, you say? Well, it is good, but I wanted to try something else that makes sense. Tactitian does not have an AA replacer to sustain and has two conflicting auras to choose between - AoC and MB. Also, we have only one Retaliation Vindicator here, from AoM era, old and outdated severely.

Time to bring the archetype to the table again!

Heavy Lightning Retal setup with decent survivability and damage even against casters. 16/16 Savagery is optional, you can leave it one-pointed and throw skill points somewhere else (in Mogdrogen’s Pact for more Energy Regen like I did, you need to cast Grasping Vines often). 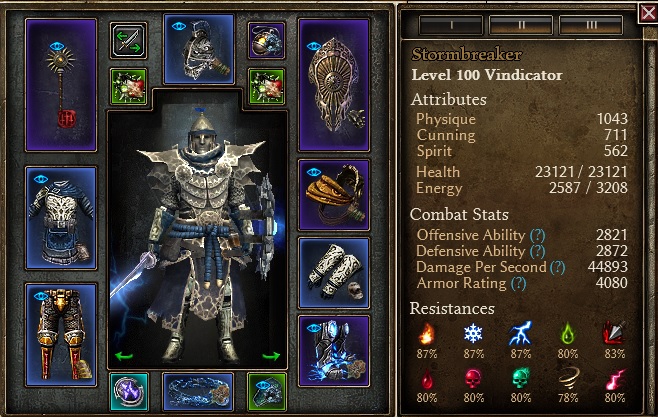 general stats, only passive buffs and Word of Renewal are active. Damage Per Second is for Savagery 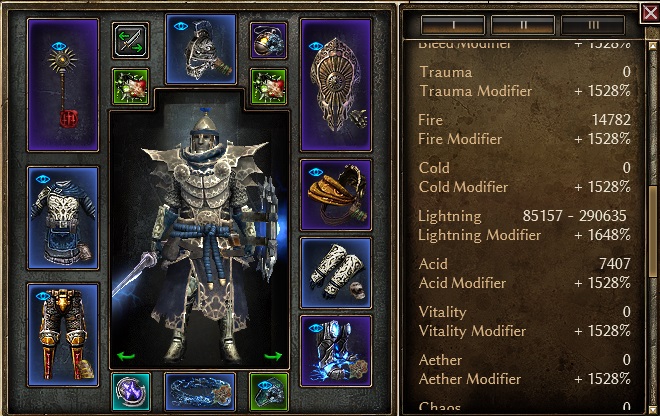 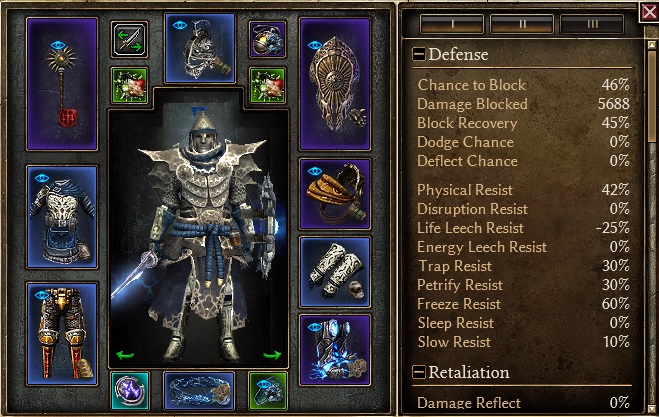 3. Gear/Build explanation.
I took all gear with flat Lightning Retaliation since it has huge numbers range for some “flavor” reasons

. To make it worthwhile in terms of damage. It costed some +1 Skills though.

About Resistance Reduction. Total amount is ~105-111% (-33% from Wind Devils, -25% from AoC, -35% from Widow constellation and flat 12-18 from Dawnbreaker’s Sledge) plus 20% RR from Viper constellation, so it can vary. Of course, Valdaran, Morgoneth and Grava are annoying to beat, but not impossible. Just takes some time. No particular problems against other Nemeses.

4. Gameplay.
Charge into crowds, cast some Grasping Vines for AoE and single damage too, Shield Slam sometimes and Savagely beat everything you see

. Uptime Wind Devils and WoR, use Inquisitor Seal and Wendigo Totem for defense and Will of the Fallen Kings for battlefield movements. Watch everything electrocuted by touching you

5. Videos.
Mad Queen (casting Grasping Vines against her when red retal aura is up… Not a great idea 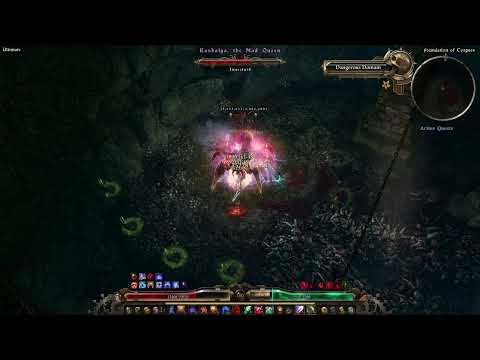 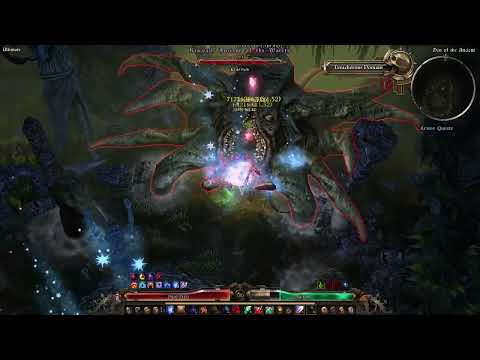 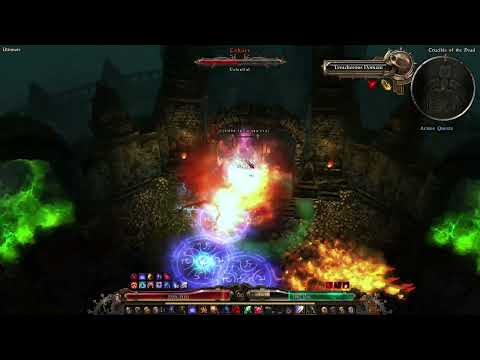 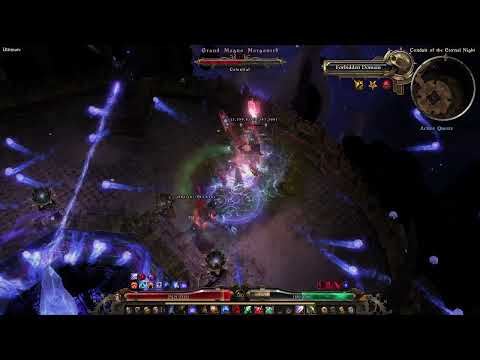 Avatar of Mogdrogen (bad for melee Retal builds, high %Lightning Res, annoying Rats. Not a pleasant fight. But possible. Potions are in the video, no Clusters, occasional healpots). 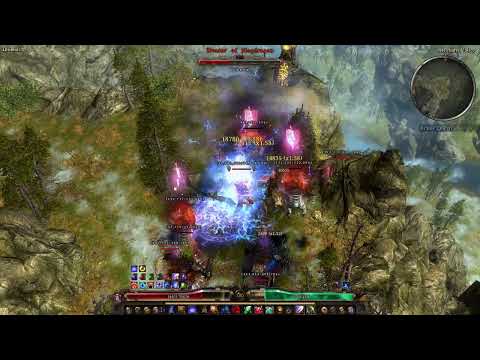 Ravager of Minds (Potions are in the video, no Clusters, occasional healpots). 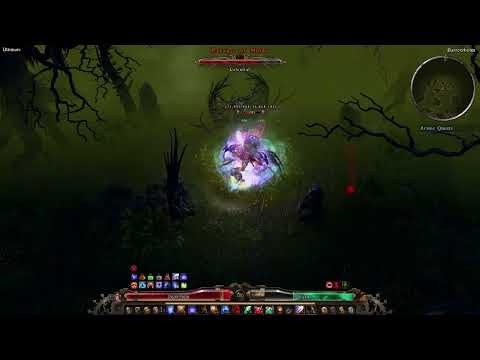 Callagadra (Potions are in the video, one Cluster to recover from a fatal mistake - lost Wendigo Totem, occasional healpots. First time died due to low %Pierce res). 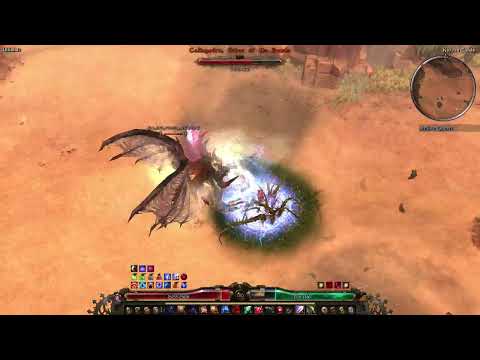 SR 75 full (with Grava, bad mutators and healers I wanted to beat 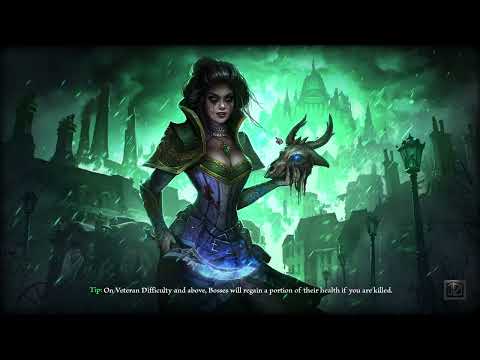 Okay, that was my Dawnbreaker Vindicator. Fun, sparky, not a Warder, but still good build to try. Hope you liked it as well. And had some feedback, of course. Feel free to comment, as usual.

Thank you for reading. Until next build!

I forgot what I was going to write

Impessive! Did you try Crate with it?

Impessive! Did you try Crate with it?

No, I didn’t try that boss yet. Crate does not attack in melee, so our damage output is severely reduced. Also, the build does not have great single-target damage and can create too many boxes to handle. Not to say that we have to facetank, against Crate

Good afternoon. Not a bad result, although I did a lot of things differently and it turned out even better ))

Hello! Congratulations to you