I never understood why this helm 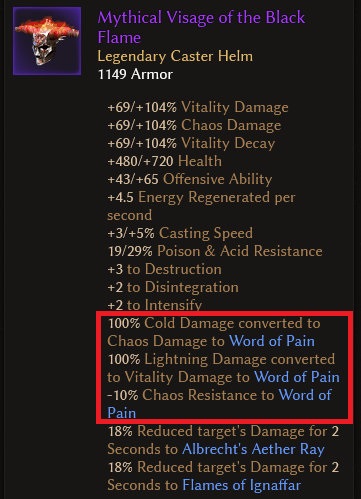 gives -10% chaos res. to WoP when it already has inbuild chaos RR in death sentance.

Instead I suggest adding a decendly high -chaos res. (around -20%) to Bloody Pox with a vitality dmg. conversion to chaos dmg.

Ngl it always suprised me since the 1st day of playing GD that the main class promoting the occult & chaos dmg. didnt have a RR for said type of dmg.

How did it go for chaos and occultist?

Bit o chaos res here could do some good. Maybe.

I support this as well. There’s not quite as much chaos support overall as I’d hoped, and a good bit less than I’d expect for an Occultist in particular.

20% spreading RR is too much for one piece. Any occultist could take the helmet for that. Either go set bonus (which would suck because blood orb blocks it and aar transmuter is terrible) or some other possibility.

Agree with the idea but needs a different solution.

Ngl it always suprised me since the 1st day of playing GD that the main class promoting the occult & chaos dmg. didnt have a RR for said type of dmg.

I think this must be the one of the most requested balance changes. Crate is incredibly resistant to such change. Too bad you don’t have any RR to penetrate them

Honestly I dont think it is too much seeing how big WoP’s AoE can be if you just invest a few points into it.

And yet we didn’t get it, sadly.

But that’s something already in the mastery

thing is, with one cast of WoP you hit lets say 8 mobs with one click of a button, so make that 1 sec for 8 mobs with applied RR.
pox get applied to only one single mob and spreads after, so it would actually take longer for the 8 mobs to be affected.

i stick to my point, that said changes would be fine.

Alright, if you think 20% spreading rr for chaos from 1 item is ok then I’ll leave you to that opinion lol

I tried making a Chaos CDR Caster build last week as a ‘somewhat educated’ newbie - and every option I tried just felt so clunky and un-fun.

Warlock is fun and has good synergies, but zero relevant RR from masteries.

Purifier has promise but it’s so point hungry, plus neither of the Exclusives are of any real use except for some peripheral advantages like Physical Resist or reduced incoming Damage.

Pyromancer would possibly be OK but only once you get chunky Fire->Chaos conversion for almost every skill you use, plus it feels like you’re going 70+ points into Demo just for Hellfire Mines plus the last node of the BWC line.

Deceiver, same critcisms as Purifier except you get even less relevant RR.

Of all the playstyles of the above I tried, Warlock makes the most sense, but lack of RR just kills it.

So add my (pointless) vote for adding Chaos RR to something in either Arcanist, or to Bloody Pox.

Or just put some on Devouring Swarm, Blood Pact or Entangling Vines and get some great mutual damage synergy for a Chaos/Vitality Conjurer.

I have a bank full of great Chaos legendaries and no real ability to use them!

Having said all the above, I just searched and noticed this. So perhaps all is not lost? 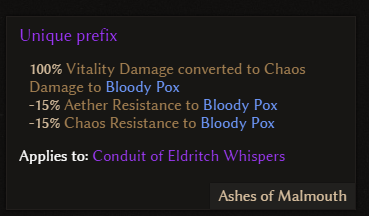 Yes I think that it is fine.
No need to “lol” either here.
I have mine and you have ur opinion

Thing is you need Myth. Essence of the Grim Dawn for Chaos based AAR to leech.
Without it… well, good luck.

As for other chaos based builds, the conduit usually feels like a big waste to use cuz there’s so many other awesome / simply better stuff to use instead.

Yeh I can agree with that.