I tried to make this concept (Wildheart + Valguur) work more than a year ago but, at that time, I lacked the knowledge and experience to make a viable build. I didn’t realize that going Savagery/Melee was not the way to go and that Conjurer would be better than Ritualist. After many tries, sweat and tears, I present to you The Red Knight. 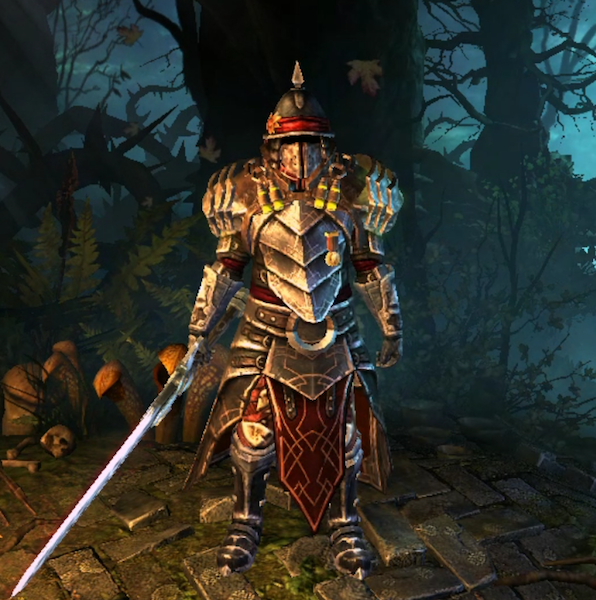 This a Caster with good AoE, DoT and great life gain. 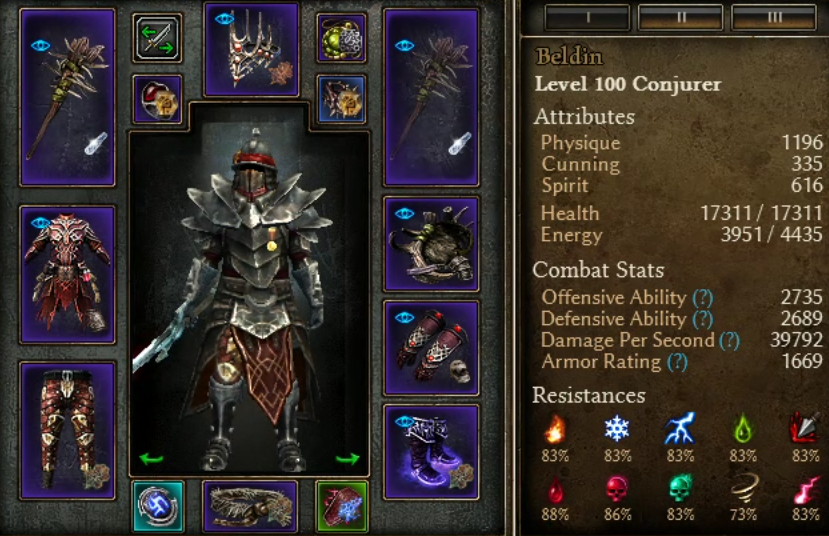 Warning!
This build hasn’t been updated since august 2018. For an updated and better version, go have a look on Valinov’s guide (same concept).

[valg] Introduction: Here is a caster that can leech/heal through just about anything. Main thing to worry about is casting grasping vines on cooldown since the effect stacks. Bloody pox with wendigo bound, devouring swarm to revenant, and maxed grasping vines bound with ratosh will provide tons of healing. Savagery is used to stack the buff when you aren’t kiting. Wendigo totem is used for even more heal and to supplement our bleeding/vit decay damage. Huge amounts of slow/trap means even …

Vitality caster conjurer sketch, not all items has augments or rolls. Just use whatever you can find to cap / over cap resistances (fire and pierce) and get some more OA (like “of attack” on belt and medal) https://www.grimtools.com/calc/62aEMEg2 Here is a cheap version with MI shoulders (for even better heal on twin fangs, the faction shoulders in the link above are very good and we need to farm some other MI’s so these MI shoulders are not priority), and magic affix rolls on each item, and au…

This build became my favorite for Ancient of Grove runs. Safe, great AoE and clear time.

Thank you so much for sharing this!

I really love grasping vines & this build shines with it.

Its just sad that it’s a caster.

Would love it more with Savagery.

Hey, thanks for the build. I found it on reddit, but here is what I got and I’m being eating up like a burrito on cinco de mayo. If you have any advice as to how, how I go about getting it to the level where your build is I’d really appreciate it. Gimme the details!

@Refried How come it ended on reddit (I’m genuinely surprised) ?

This is an old build and the set has been buffed since. I can’t remember who exactly (Valinov maybe, but my memories might be wrong) but there was a better version of this same concept: Wildblood Set and tons of health sustain.

Edit: here it is (my memory is fine for now).

[valg] Introduction: Here is a caster that can leech/heal through just about anything. Main thing to worry about is casting grasping vines on cooldown since the effect stacks. Bloody pox with wendigo bound, devouring swarm to revenant, and maxed grasping vines bound with ratosh will provide tons of healing. Savagery is used to stack the buff when you aren’t kiting. Wendigo totem is used for even more heal and to supplement our bleeding/vit decay damage. Huge amounts of slow/trap means even …

Oh, it didn’t end there, that’s where I found it. Unless you mean how did it end up there. Their community is quite large and any questions you have get answered, which are usually about builds, etc. Plus they link to all the compendiums which is where I found it.

My problem is where do I go from here (what I linked you). I have no clue, everything kills me. I still only have AoM and I’m just returning to the game. If you have advice on what to do I’d appreciate it: where to farm, what to hunt, how to get the gear to get THAT gear if you know what I mean.

I don’t have any of that endgame ridiculous gear.

Except for a few specific sets (vanquisher, dark one), all drops are random. You should fellow a beginner guide to get a good understanding on defensive layers. Your link is missing cruelly DA and doesn’t have the resistances capped.

Go and check the content from @malawiglenn, @Nery and @StupidDragon (sorry if I forget someone). They make excellent guides. for instance, you can get inspiration from this Cabalist while you farm the pieces you need.

[image] The guides are very detailed and will show you how to make good end-game builds that can do some of the basic end-game content in Grim Dawn. The builds can farm the basic end-game areas such as the Rogue-like dungeons and thus works as good “stepping stone” builds before you start to “swim” in legendaries, blueprints and crafting mats - then you can start to make builds you see posted on the forums that eats Crucible and Shattered Realm for breakfast! But, we need to walk before we c…

Or go with King of Birbs, @Maya, if you like Pets. Excellent beginner friendly builds also.

Note: by beginner, I don’t mean not experienced in the game but without solid gear options.

No, no pets. I’ve read their guides and it doesn’t answer the right questions. Why is this so hard to answer? Everyone dodges the same question… it’s like asking if whether or not the gear selling on Discord is hacked loot (which it is), and being pointed to someone else.

Just tell me what you did to get the gear you have, it isn’t a trick, I promise. That beginners guide is nothing but a masquerade of: “You have to make a stupid boring class in order to farm for an actual class you want to play.”

If that’s the case with your build, please, just say so.

“This is my build, it’s end-game only. You must have another character to farm for the gear it has.”

The reason why the DA is low is because I don’t have the gear. You need the gear to get the DA gear to begin with. https://en.m.wikipedia.org/wiki/Catch-22_(logic) – so, how?

The answer is the same as in all ARPG’s. Farmed for them. That build is an end game one so you won’t start finding that sort of stuff until you’re levelled quite high. In the meantime look at faction gear to fill in the gaps for what you need.

[vitcabalistfront] For a version with much better formatting, download this pdf-file from my Google-Drive: Vitality Caster Cabalist (pdf) You can read each section by clicking and a box will open. I have done NO FORMATTING so if you want something that is 20 times more readable, download the pdf version from the link above. This guide is based on “Nightmare’s vitality cabalist” by ceruleansong: [1.0.3.2] Nightmare's Vitality Cabalist New Player Starter Build I have done many adjustments to…

Just tell me what you did to get the gear you have, it isn’t a trick, I promise. That beginners guide is nothing but a masquerade of: “You have to make a stupid boring class in order to farm for an actual class you want to play.”

Read my guides, I give plenty of gearing tips for the build displayed in them. I have spent LOT of time making many builds, with variation of playstyle and class combinations.

Thanks for calling them “masquerade” and “boring” (which is kinda subjective). Let me know the day you spend 200 hours trying to help the community and I will give you some feedback for sure. I did not make any of those guides with the motto “you need to make this build first to farm for other builds” so that is something you have come up with on your own.

Look, some builds you will see posted in the forum are impossible to do without specific items, and are therefore “locked” behind farming. I can probably make a budget version of this build with similar playstyle no problem for you (I think I have it in one of my build sketch documents somewhere), but now that I see what kind of attitude you have I think I’ll pass. You are just a needy noob that wants others to do the work for you. I can make a build with faction items and such that will just smoke your build out of the waters.

For the legendaries etc used in the end-game builds posted on the forum in the compendium, it is basically just farm farm farm. Start with farming Rogue-likes, bosses and nemeses in Main campaign, Challenger crucible like wave 100-150 runs, elite Shattered Realm 55-60ish and so on. Then after 200 hours of that, you should have found enough legendaries, blueprints and mats to improve the build further.

No, I read your guides. I didn’t say they were boring, I said that they basically encourage you to build a boring class for for starters so you can get the gear to build the actual class you want. Your guides go out of their way not to say this. That make sense? This isn’t anything new, the base game years ago had the same type of stuff, nothing’s changed. I appreciate your guides, but they’re not what I want nor address the problems from a standpoint I need, anyhow.

Medea answered what I wanted to know. It is a very endgame build. But where my character is at is not something faction gear will manage, nor is there a guide for people who are in this spot. In all actuality, this is usually where people peeter out on the game because it comes between being stuck and interest level (according to reddit anyhow).

But where my character is at is not something faction gear will manage, nor is there a guide for people who are in this spot.

Could you clarify on what you meant by that?

Even with Faction gear, you should be able to easily run Skeleton Key dungeons atleast.

I didn’t say they were boring, I said that they basically encourage you to build a boring class for for starters so you can get the gear to build the actual class you want.

They don’t do anything of that, that is your interpretation of it. And what is boring? What is fun? All of that is subjective.

Look smart-ass, if I were to make guides that would encourage players to make “a boring class for starters” I would just have ONE guide, the vitality caster cabalist. Like why would I then bother in making +10 guides for a variation of playstyles, damage types etc?

Kid, random green items and faction gear is much better than what you are using now. Also you need to hunt some MI’s. If you ask nicely, I can make a vitality caster conjurer guide. But frankly, I think this build is boring so I think I’ll pass