I don’t complain about the GD1 graphics but I’m not into it that much, I prefer a more mature one(think about WoW and ESO for comparison,I like ESO graphics)

Grim Dawn’s graphics are without a doubt more “mature” in comparison.

Do you mean more brutal and gothic?

Do you mean more brutal and gothic?

You could say that. Basically, Grim Dawn goes for a more mature semi-realistic look whereas games like WoW (and Torchlight, for example) have ultra cartoony graphics that are clearly aimed at children. Visually anyone can see this difference.

Look at some clips with Diablo 4 or Wolcen, compare that kind of graphic with GD and you will see what I want.If you can’t do it then sorry my post wasn’t for you.

Look at some clips with Diablo 4 or Wolcen, compare that kind of graphic with GD and you will see what I want.If you can’t do it then sorry my post wasn’t for you.

You mentioned WoW (and ESO) - you didn’t mention D4 or Wolcen until this post. Jus’ saying.

I’m not against “better” graphics… and what kinda diablo-like enthusiast would I be if I haven’t already seen D4 or Wolcen?

May we assume you are refering to high-fidelity graphics? GD2 should have you covered.

Why did you buy the old TQ engine?

The only thing really limiting us from replacing all of the engine components over time is that it has to support the art we’ve already created and we’re sort of obligated to support older versions of directX because we supported them with the initial release and people running older systems wouldn’t be able to play if we didn’t.

Another issue is that a lot of what people interpret as being the look of the engine is actually the look of the art itself and how it was made. We started working on GD 8 years ago now and expectations for the size of texture resolutions and triangles on models was lower than they are today. A lot of what has improved with the look of the game over the years is just us updating art / redoing textures.

The thing that might have the biggest visual impact now would be to redo lighting and the way materials are rendered but that isn’t really feasible unless we move on to GD2 and leave all this current art behind. If we go on to GD2 and no longer have to support older DX version or existing art, then we’d be free to make bigger updates to the engine.

Yea maybe I should say this first time. For me GD and WoW feels cartooni no matter how you put it and I don’t blame anyone that thinks otherwise.I respect ppl oppinios but I expect they do the same.

Yea maybe I should say this first time. For me GD and WoW feels cartooni no matter how you put it and I don’t blame anyone that thinks otherwise.I respect ppl oppinios but I expect they do the same.

Must be a language barrier thing. You weren’t being disrespected. But I will highly disagree with any assertion that says that GD has WoW graphics - if anything putting them in the same category graphically is disrespectful to GD in my view.

Thank you for the response! Just so people don’t hang me I don’t hate the GD graphics is just a think of personal taste. Maybe even a caprice(whim) on my part.

i like wow graphics, i like GD graphics, doesn’t mean i want one to be the other, rather i’d like there to be the different tones/games
personally what i love about the GD art is it reminds me of exactly that, “old” oil paintings. It totally feels like how i thought it would be when stepping into The Painted World in Dark Souls
and i really really hope that GD2 adopts the same type/style although more updated, and stays far away from Wolcen plastic looking graphics with overabundance of “shimmer”/character glitter reflection

I don’t think Crate Entertaiment will consider me disrespectful saying that GD feels cartooni but who knows maybe it is but that makes GD better. Nothing is perfect and it has to have bad thinks as well and seems maybe i am the bad think in it and in the end that makes the game more good for you and others.

If they decide to make it and when they’re ready to tell us, of course.

Thank you for all your ideas, passion and braveness to make such a great game for us. Grim Dawn will not die without your patches, it will live in our hearts and hard drivers. I will definitely be visiting Cairn MOAR. Still, it will be something new to be without updates and Grim Misadventures (let´s be honest - sad), but, inevitable. Looking forward to your new IP´s! Good luck, Crate team!

Hi there! I know I’m a little late, but there are still a few of us left from the Before Times (from the TQ.net forums in my case, but I mostly lurked on there just like I do here). Grim Dawn has turned out way better than I ever could’ve hoped, and it’s kept me busy on and off for longer than any other single game. Even when I stop for a few months I always get some other silly idea for a meme build to run through the game one more time with, so who knows how much more I’ll get out of it at this rate… 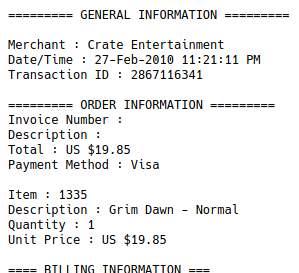 Late to the party, but I just wanted to thank all of Crate once again (hopefully not the last time, because gimme that promising Farthest Frontier!) Over the years, I’ve been contantly amazed at your attention to feedback, and your consistancy in design and philosophy. So, once again, thank you for all your hard work. Playing Grim Dawn has been and remains a pleasure.

Grim Dawn is a game special to me because it’s one of those games that helped me define the world of ARPGs with its diverse gameplay mechanics and unique storyline. I’ve been playing it for more than a year and I became underwhelmed when Crate decided to cease updating it, since I’ve also expected a lot of new content from them this year.

I do have some high hopes for both of the upcoming projects Crate has been working on. I feel like GD2 would be a response to some unexplained lore surrounding world of Cairn as well as adding a lot of new things that we didn’t get to see in the previous game. The concept of Farthest Frontier is also pretty interesting. Personally, I’ve never played a town builder but the game itself makes me really want to try it once its released.

Seconded. This is an area where I think Crate pulled it off flawlessly- game retains that old school look and feel, while at the same time modernizing textures and particle effects and stuff. The end result is gorgeous and a huuuge part of the charm of this classic game.

@Klark i agree with just about everything else you said though. Especially starting the kickstart for Crate to work on GD2! But, to be fair and respect all the hard work and time they put into GD 1, i want to give them a break from GD for a while. Besides they have Farthest Frontier coming out next which looks very interesting, and are working on other stuff as well.

I think GD 2 will be best if Crate is able to take a break from it and return to it later, refreshed. I love the idea of a kickstarter to support GD 2 efforts though- maybe whenever they decide to venture into GD 2 territory we could all jump on that idea and give them a bunch of money to help fund it!

Completely agree. Sure, some better (more fine grained textures and details) visual effects would be nice indeed, but the overall visual direction of Grim Dawn is just fantastic, and I hope they won’t deviate too much from it for Grim Dawn 2, if we ever get it (hopefully we will)

4 posts were split to a new topic: Please upload Nemesis vs Nemesis video(s)

with the end of grim misadventures, I feel like friend has died…