Guide for helping how to choose your build!

This kinda rankings are fun but very subjective. After some thought I changed mine to this. Infiltrator is still king of pure dw melee. And those top pet builds deserve more respect. So does paladin. And trickster.

So y’all are talking tierlists which is making the praets talk tierlists (again). I see Strukto dumped my old one a few posts back. That was made a few months ago and it has since changed so I’m a little disappointed that Strukto took the one from the stream with no context and not the one I shared in Discord after a few revisions. Even this “new-er” one is still “old”, though. 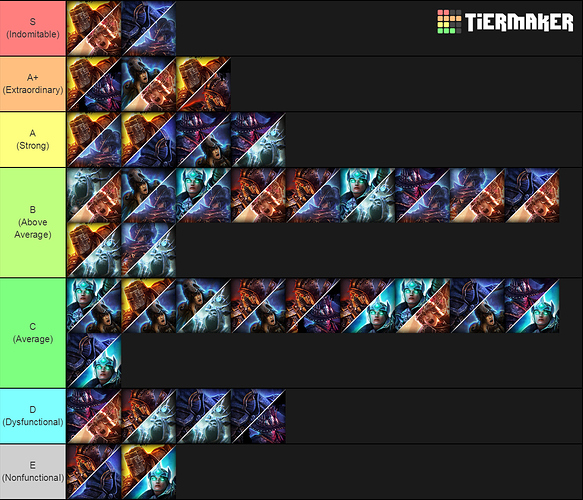 Measuring metrics were as follows:

I don’t really play or understand pet builds so my rankings of Ritualist, Conjurer, and Cabalist all come from the Vit Caster/Vit Savagery sort of mindset. Also, this was pre-Voidsoul/Dunefiend/etc., so those sets are strictly not considered in the slightest and I don’t think the dust has settled enough to yet judge them in any concrete list anyways.

“Why is Defiler higher than Sabo?”

Strictly speaking, praets are arguing that Defiler should be in C tier but I can’t bring myself to do that. Saboteur, however, is uniformly considered the worst mastery in the history of the game. It is tough to put together, often requiring very specific items with very specific rolls to meet stat requirements or close resist gaps, and has godawful OA/DA support. In addition to that, it barely has any damage synergy (outside of Thermite Mines now reducing Cold Resist) and its gear support is about as bad as Chaos’s in general. Defiler, on the other hand, at least has gear which can kinda make things happen, and that gear is not terribly difficult to come by. Furthermore, the combo performs better with worse gear and there are multiple ways one can play it. There isn’t an inherent synergy between the two masteries and that which is granted via items isn’t anything too fantastic, which is why I put it in D-tier, but I do understand the argument to see it in C.

How easy is it to put this combination together for new players? (this is why Commando is so high btw)

Death Knight is…well…Krieg’s? Yeah I guess it’s the easiest of the easy to get if you’re new to the game, but there’s really only one tried&true Krieg DK build. Maybe you can also do wacky stuff with DW Mindwarp Krieg DK too, if you get a DW item and gear that covers the resist gap from the loss of a shield.

Commando may not necessarily have a whole set that can be target-farmed, but it does have many different sets all of which are decently workable (Justicar, Valdun, etc.). It also has the best - in my opinion - 2H weapon in the game in Shar’zul’s Worldeater, which can be target-farmed and can carry you in Faction gear to SR45+. With better gear, it’s also a fine SR75 farmer. Furthermore, I also feel like Demo brings more to the table defensively than Necro does - MoT vs Blast Shield, Flashbang/Searing Light, etc. In my experience, early, mid, and late-game Commando’s are just far superior to DK’s in every way and the trope of “Every new player should play Stupid Dragon’s DK” just isn’t as necessary anymore as it used to be.

I know about Krieg DK.

Reason why I asked is because I have been trying to make a budget/faction geared Commando similar to my other builds that I have in my “collection”.

So you are claiming that Commando with the World Eater and faction gear can do SR45+? I might take up on that Challenge. I am not aware of any faction gear that provides bonus to fire damage AND forcewave.

So you are claiming that Commando with the World Eater and faction gear can do SR45+? I might take up on that Challenge. I am not aware of any faction gear that provides bonus to fire damage AND forcewave.

You won’t do anything quickly in Faction gear, but here you go sir. https://www.grimtools.com/calc/YVWlLxGZ

Only drops you need are Worldeater/Valor pants. Everything else is faction. No AoM components used.

Thanks, I might take a look into it and testplay. 17/16 forcewave do not look that promising compared to my FW budget Warlord and Deathknight in terms of damage (+1400% fire damage, 157% casting speed and 4% life steal is not super much either…). SR 45+ here we go, just gonna prove that this can actually kill SharZhul first without world eater

EDIT: changed devos and skills a bit https://www.grimtools.com/calc/b28jEzqZ more life steal and casting speed and OA (+DA shred, less Blitz dmg). Another weapon augment with fire damage might be better, we already have ton of health and DA.

Some practical tips:
FW isn’t really for singletarget. It’ll clear packs and you’ll use it while your other skills is on cooldown, but your boss damage comes from shotgunning with Shar’zul’s Wrath and Blitz. The build has plenty of survivability between White Lotus, MW, Blast Shield, and Time Dilation. Being able to purge debuffs (Cleansing Waters on War Cry) is also amazing for your defenses. Again, no, it is not fast. But it’s easy and, in my opinion, far tankier than a 2H DK would be.

Wouldn’t really recommend your edit’s changes but you do you. Just don’t swap to Blindside. You already have more DA shred on Flash Bang than that which Blindside gives you. Keep the single target damage.

True, flashbang is there. Will keep blitz.

Will testplay with some random Obsidian war cleaver first.

My devotions should be better, Revenant and Viper over Manticore, Vulture & Panther.

I think different opinions should be included and this is mine. The fact that commando is ranked so high by one of the most experienced and respected members of this community confuses the F out of me.

In my very humble and possibly misguided opinion, commando is one of the worst classes in the game. How can a single rr class (and retarded single rr - either clunky mines or the long cooldown Warcry with flat rr not mentioning demo already has flat rr) class be extraordinary?

Versatility? There is one commando build that is very good for endgame: Justice Shar’Zul. It’s outperformed by Warlord and iirc also Tactician despite Shar’Zul being designed specifically for demo. There are also some RRtarded Warborns or Markovians with Beronath Sword that are leagues behind Warlords, Death Knights and Witchblades. Ofc there are Archon Warmaul / Kilrian mace gimmicks, you can try Valdun, you can even finish the game with an aether Stun Jacks commando if you so desire. But I can’t think of a single commie build worthy of being called extraordinary that wouldn’t be better on another class.

Potency? How can this be better than a class that currently has the strongest builds in two playstyle categories, and other classes that have always wrecked the game in different modes (pets? paladin? vindicator?). Commando has not a single achievement in anything that wouldn’t be beaten by another class by many orders of magnitude. If you take all possible criteria of what defines a great build one and write down 5 best builds each, I doubt commando will be mentioned even once.

Leveling? Battlemage is also easy to level. Until you choose the second mastery.

HC? OK, there’s Blast Shield and Flashbang. But clearing the game in HC is more about preparation, knowledge, knowing which res to overcap for which chapter and which bosses, etc. And as opposed to other soldier classes, demo doesn’t exactly have much to offer here: no cc res, regular res, health, etc, Many things gotta be acquired from gear and devos which is hard during self-found leveling. Blast Shield, can’t argue, it’s great.

Synergy? Flashbang? Half its power is obsolete in many cases as soldier also has excellent sources of flat da shred. BwC? Shar’Zul, the commie flagship, already has flat oa shred, and soldier already has dmg reduction. RR? There’s no way soldier’s and demo’s rr can stack in any way, demo already has flat rr. The only thing is very good oa and speed. But it’s not something no other classes have. And its more important at endgame when you care about RESULTS. And those, ironically, are better with just about any other class.

This my personal (but very strong) opinion that commando (next to battlemage) is to soldiers what defiler is to necro or saboteur is to nightblades. Saboteur at least has N&O that does not work better on other classes anymore. Demo is second worst support mastery for soldier.

Ironically, memando was my first build ever. Good times.

Versatility? There is one commando build that is very good for endgame

Versatility? There is one commando build that is very good for endgame

I also saw one do Commando Cadance. Good, but not as good as warlord.

Why do you guys place Archon so high in the tierlists? Isn’t the point of a shaman to wield 2H and the point of an oathkeeper to carry a shield? Is this some kind of meme or am I missing the hidden 15+ build guides somewhere?

Why do you guys place Archon so high in the tierlists? Isn’t the point of a shaman to wield 2H and the point of an oathkeeper to carry a shield? Is this some kind of meme or am I missing the hidden 15+ build guides somewhere?

Welcome to the forum!

Archon is good, and it’s not just Cyclone. You got Avenger, Wildblood, and these work on archon. It’s got plenty of health and armor if you choose so (Fervor and Mog line are synergistic), good selection of primary res. I still give Vindicator more points because both masteries support lightning outside Cyclone set, but archon is a powerful combination.

I just started a Defiler today. Planning to do just that, level with pets.

In fact, the only Demo skills I’ve planned to use are Flashbang and its sister boost. I MAY decide to get some Blast Shield when I get to around 70 because I know not having more points in that mastery bar will feel a little angry.

Just a friendly reminder that I went 1-100 with both Solo Occu and Necro. So, Defiler and Warlock are definitely viable provided you go pets

You might wanna check the how to choose your build guide and different people’s class rankings. The only argument about defiler is whether it’s the very worst or the second worst class.