I’m currently restructuring my campaign mod Nydiamar into a new mod where you won’t start with a new character but instead use an existing one to play through one very large Rogue-Like Dungeon (which has entrances leading to 19 other Rogue-Like Dungeons). You could view it as a huge DLC for the main campaign, like the Crucible. This dungeon has a high enemy level scaling as well as a high enemy density — so it’s supposed to be very challenging.

While I will include a simple script to copy your own character(s) to a modded state, I also would like to have some characters already included in the download.

Maybe some of you know about the weekly Diablo 3 Challenge Rifts. There you play a random build through one predefined Greater Rift. I want something similar, where people play a build they do not know of yet through some challenging content.

The mod is already built. Here are some screenshots. The locations these entrances lead to are from Nydiamar (with changes), so check them out on the mod page. Advancing any further requires an entrance fee, which can be acquired by completing several of these side dungeons. 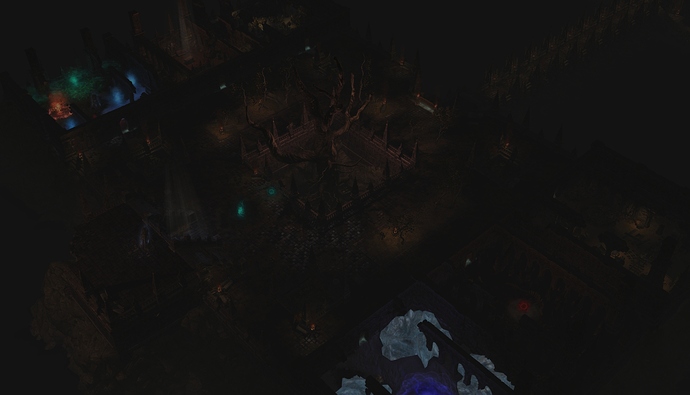 I hope that some of you could share a few build ideas or even send them to me (or upload them right here).

While I have not tried it yet, I personally was planning to use GD Stash to create a fully built character, since I could obviously not grind them all.

Best thing would be though if someone would already have a fun character laying around and ready to share. If you don’t want to bother with this, maybe you could post a link to an existing niche or meme build, so I can hack one together on my own.

There are obviously already many great builds to choose from on this forum, but I currently don’t have much time to go through so many (and also to understand and built them), so I hope someone makes it a bit easier for me.

Actually kind of surprised nobody’s responded to this yet. I know this doesn’t quite fit the bill of what you’re requesting here (both because it doesn’t narrow down your search all that much and because the builds there don’t exactly come in your requested format), but I feel like I ought to mention this thread I started a while back:

Interesting/strange/meme(?) builds you're most proud of Classes, Skills and Builds

So I’m not much of a build-maker myself, but I do derive a great deal of enjoyment from perusing the builds posted here, especially the ones that introduce unexpected twists, from full-on meme concepts to ideas that become emerging standards. (E.g. this recent uptick in Scales of Ulcama usage on otherwise non-yellow devotion paths has been fascinating to observe.) Even more than that, I really enjoy the commentary around these twists and how/why they came to be. So out of a selfish desire to se…

The response there was both overwhelming and extremely entertaining. You’ll find a lot of variation in performance here (which is expected, as performance requirements were deliberately not a point of emphasis there), but there are should be a number of interesting ideas to browse.

As for fun builds I’ve seen lately, I haven’t tested this one by @Snazzblaster

Horn of Gandarr was given great damage reduction utility last patch, and I felt that this underrepresented skill could use a bit of love. This build is the Grim Dawn equivalent of a Dutch Oven, trapping your opponent and then mercilessly tooting on them. This is best summarized as the “trap n’ toot” playstyle, but just trapping and tooting does not provide a large amount of DPS. Luckily, Shadow Strike (the slap) provides the needed single target damage to help kill bosses more quickly. Acco…

but it appears to be living the dream.

As an aside, I wonder if it’s worth exploring tweaking boss CC resists in some (but only some) of the predefined challenges to increase the viability of Olexra’s Flash Freeze or Blade Trap even for builds that don’t use the corresponding dedicated sets.

I remember this post, i want to respond with every one of my builds but am distracted by MTG new release (Commander Legends), and Thanksgiving at the moment.

… You’ll find a lot of variation in performance here (which is expected, as performance requirements were deliberately not a point of emphasis there), but there are should be a number of interesting ideas to browse.

Thanks for linking the thread, exactly what I’m looking for. I will check them out.

And the build you have linked is what I’m gonna try next. Sounds fun as hell!

[Removed the download, full release imminent, and the version was buggy]

If anyone wants to link me a build or two, go ahead. I got three now and will add two more, don’t know which ones yet.