so, after the surpising results of physical EoR i decided to check whether the EoR itself became busted somehow so i picked easily the worst one - lightning.

https://www.grimtools.com/calc/62aRo3bV (3 crafts for slow, capped %as)
a miracle didnt happen, its bad. i assembled it for maximum damage, so obviously the tankiness can be impoved. although its quite meaningless to tweak sustain here because the damage output is abyssmal. I died at 160 with all nemesis up and 2.30 on timer and then at 170 at 5.20 all nemesis full health. the main problem is RR. First of all, its single rr lightning build so theres not a lot of it to begin with. Secondly, and most crucially, Wind Devils and Arcane Bombes are fucking attrocious for melee. Most of the time, enemies are not effected by any -rr% source. Wind devils are so insuferably slow and on top of that even with spamming pet attack they are impossible to control, so they prefer to fight crabbos in the bottom left while youre sweating with 10 heroes in the center. As for arcane bomb - wait a second. Literally, it firstly needs to be placed (% chance to proc) then it takes 1 second to arm and then it applies its debuff in tiny area and that debuff doesnt spread. And even if one was able to tame Wind Devils and place arcane bomb, then theres no guarantee that one will survive grava or valdaran.

I guess, this could be addressed to almost every lightning build as it likely 100% will be with Shaman.
I wrote long ago about increasing base lifetime of WD’s to 18-20+ sec at cost of some +duration mods on items.
Now it’s super-cancerous to constantly resummon them.

About Arcane Bomb - maybe make it detonate in a bigger radius, or make it spreadable like other RRs.

Also it may be worth lowering Valdaran’s lightning res for 8-10% as now he’s the only one with these gross 113% resist.

About Arcane Bomb - maybe make it detonate in a bigger radius, or make it spreadable like other RRs.

How about no arming time instead? That extra time really hurts it’s RR application and removing it may be all it needs to reduce some of the issues with it…

How about no arming time instead?

I can’t heart this one enough.

Would be nice to have arm time reduced to even 0.5 sec or 0.25.
Would make Runes less annoying to use as they would burst almost instantly on monsters’ faces. Their projectiles would fly fast and stick to them, resulting in more damage!
Also easier to achieve post rune clarity, empty those areas of enemies in no time!

I support that idea.
You must know how to handle your artifacts to quicken your arm time after all.

Won’t do much for the problem at hand (Arcane Bomb).

With Mythical Empyrion’s Mercy getting a mega bump to lightning EoR, I’d like to request that Mythical Crystallum EoR mods be thrown in the trash can and instead Malakor’s Infusion get an elemental EoR damage mod and fancy purple colors. This seems perfectly acceptable for a hot patch and in no way a big ask for a game on the backside of development. Thank you for your support

Speaking about lightning in general, the recent addition of racial to Eye of the Storm is nice buff but it doesn’t solve the problem in general, as not all lightning builds rely on Shaman.

What would be a great start is increasing Arcane Bomb’s aoe while halving its arming time, e.g.
It will provide a way better RR.

Valdaran’s resist could be also lowered as it seems like sth from the past when nems had 100+ resists and Valdaran even then looked gross.

Also, I think Wind Devils’ cd could be reduced a bit, to, say, 4 secs or 3,5. Or lifetime increased so one doesn’t need to have to resummon them constantly.

It’s also surprising a bit that electrocute as dot-type is so poorly presented in-game. No flat sources in devos and very little itemisation to rely on.

well i made a similar build exept i use the full set instead of 2 pieces and my relic if im not wrong i use the sacred talisman for tge 500% all dmg and crazy mana regen.

and i use the mythical fire sword i dont remember the name lol…tge one that give phoenix dive.

only issue is survivability…i might have to redo some of the devotions.
i like tge imp devotion for the wind devils pretty powerful.

(in-game it is 22/12 full spread due to changed mods).
the sustain is w/e though it would be better to increase it to 8%. Also, timings are quite mediocre/bad, I did 5:20 and 5:46 runs, mainly because of awful AoE.
as SJs will probably never beat any records (and lightning ones have worse support than cold), i suggest also adding +1 proj to the off-hand/sword/set itself (remember Harra that has +2 to projs). It will improve damage but ofc not break the game.

well, time to post more results and thoughts about some of my lightning builds and their performance.
first one is Veilkeeper.
https://www.grimtools.com/calc/RVvzmeWV

the build struggles with:

Grava is a known issue to all melee builds and especially lightning ones. When faced on wave 165 with father Abaddoth, it’s almost insta GG. Dunnow ho though it would be a great idea to make Abaddoth spawn on 165 when there can come Grava and IM all together.

Valdaran is another kind of issue. As Grava is a death-threat to melee, Valdaran is just a fucker. With his abnormal 113% resist he takes very long time to kill, with 3-elemental builds too. If u add Resistant and Shattered mutators on top of that, you can easily get a boss who eats up to 20 sec of your time.
Double-RR builds deal with him a bit faster, single RR builds struggle.
Again: Valdaran is not super-tough. He is SUPER-ANNOYING.

Stun Jacks Purifier: https://www.grimtools.com/calc/aZqzxnAN
Well, the extra radius treatment was quite good, though it’s still hard to beat any records on it.

What can be done? 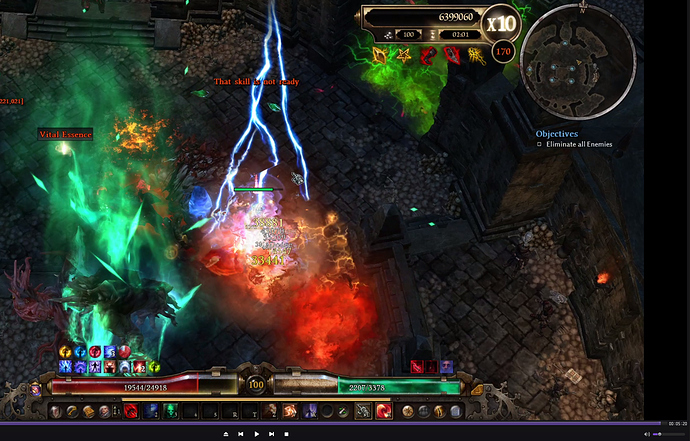 I suggest nerfing cyclone here. It looks like paladin is the way to go for elemental eor types, except on cold where you want dervish (and that’s a squishy boi too I tried).

I suggest nerfing cyclone here. It looks like paladin is the way to go for elemental eor types, except on cold where you want dervish

Shieldbreaker is also less cancerous than Archon and feels very good in SR at the moment but I’m not a crucible pilot https://www.grimtools.com/calc/r2BXXoJZ

Just buff wind devil/maelstrom base skill back some please

I have a bunch of lightning based druids or vindis trying to use wind devils for aoe and they don’t cut the mustard. Maybe when they all line up on a single target but with their movement speed and ai that’s a rarity

Edit: not a new request but I’d actually like to see a movement speed mod for them, would assume that’s possible in the engine

Edit: not a new request but I’d actually like to see a movement speed mod for them, would assume that’s possible in the engine

Wind Devils? More like Wind Grandmas. If tornadoes would be as slow as wind devils in GD, they’d become tourist attraction.

Crate could probably nerf their damage by 1/3 but give them decent movement speed and their overall “damage done during the fight/encounter” would stay the same or be better.
I have +32 s duration for wind devils on my caster and I’m still disappointed. I’m playing self-found and I was pretty happy when I completed Cyclone set - I thought that my build will finally feel less clunky, but nothing changed, I’m still re-casting them on CD, because they are never where they need to be to be useful…

Tbh, maybe it would be better to just give up on Wind Devils as pseudo-pets and make them… a skill-shot. You just shoot them out and they go in a straight line or any pattern while passing through enemies. You have to keep summoning them anyway, but as a skill-shot you’d at least be in control of where they go.

a skill-shot. You just shoot them out and they go in a straight line or any pattern while passing through enemies.

Edit: Either way, any major mechanical changes to a mastery skill at this point in the game’s lifecycle are out of the question.

Edit: Either way, any major mechanical changes to a mastery skill at this point in the game’s lifecycle are out of the question.

Yeah, I know it’s impossible. It was just my wishful thinking.