TBF flat components being forced melee/ranged is always a bummer to me. Cold gunner has to fit a seal that doesn’t fit especially well because no coldstone. Fire isn’t quite as bad off for ranged since seal of the void is a usual pick, but otherwise can’t leverage enchanted flint. But I think the last time this came up it was either shot down or nothing came of it.

Yeah I know but Fire/Cold/Lightning range builds performs better than most DW melee opponent. DW lightning melee was mostly meme atleast until 1.1.9.2 Stormheart and Crystallum changes and Stormserpent buff in the previous patch. Recent changes to Veilkeeper(Druid) and Stormreaver should become a good archetype. Ultos PS is still good and needs no nerf or buff. And actually neither of these builds require such component since their base damage is lightning not physical. Stormheart builds also mostly will use Seal of the Void as I mentioned. The weapons that needs a proper melee lightning component are Crystallum and Stormrend(except epics)

I’m aware that devs somehow dodge this lightning component issue whenever it comes up but now they seem to be creating alternatives for lightning melee so why not a new component? Doesn’t have to provide huge damage either, I suggested it should have some less %chthonic damages so they atleast survive againts grava but imho using seal of skies makes no sense in those builds.

I once made a mod for myself that changed the names of the ‘bolts’ components into ‘salts’ and then made them apply to all weapons. But then stopped using it as my builds would be ‘illegitimate’.

Since it’s on topic with Lightning melee, I’m gonna make the following suggestions: 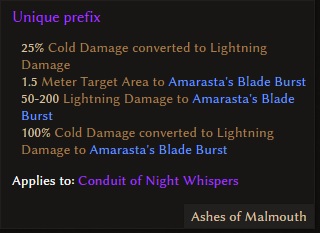 Reason being: at the present moment you can’t convert the Acid damage in any way to Lightning. It’s just stuck there. If you try to make a build around the Conduit using the Amarastan Crusher, you’re missing out on a massive source of damage. And frankly, unless a ton of accessible Acid->Lightning sources get added soon, it’s easier right now to convert the Cold over to Lightning on gear, not that that’s pretty either but right now, it’s preferable.

Reliable flat sources. Much more of them

Fully agree on this. In particular on Lightning Trickster:

Both points culminate in you ending up with at best Lethal Assault that provides far less damage than other damage types where you’re struggling to hardcap it and Dual Blades hardly being any better. As you also miss out on flat sources in Shaman (as Brute Force is locked off and Mogdrogen’s Pact/Blood Pact either don’t synergise or are low efficiency), it means you don’t have a strong base to start working on for damage.

acid>lightning conversion would definitely be better for non-SS lightning Trickster builds but for ABB, it’s still impossible to get overcap the skills with lightning gears. I had suggested it should be changed to lightning blade spirits in here