Part of the fucked up truth of Cairn is the humanity was created from the sacrificing of Ch’thon and so part of his madness lives in all people.

Wow I thought I was pretty into the lore but totally missed this. Is this ‘madness’ what corrupts Aetherials like those which possessed Warden Krieg and Theodin Marcell? That’s pretty neat to think about. Likewise I assume there are some people better capable of resisting it, which are probably inclusive of (most) of the NPCs we run into (except Direni?) in towns.

Should totally lean into this more in GD2!

I feel like to create depth, sometimes you need to have supporting story and events that you never explicitly reveal but which provide coherent foundation for the story you do tell

Totally concur. I employ this too. I believe very strongly in providing opportunities to an audience to fill in the gaps themselves, regardless of whether they actually “get it right” - just giving them the potential to better immerse themselves is valuable enough!

You missed probably the biggest influence though - Demolitionists. They aren’t called that in the books and I forget the details now, its been so long but I remember they had soldiers who were basically explosives experts. This goes back to Glen Cook though and Erikson borrowed from him.

The sappers! SMH. Of course, with all their explosive munitions.

Really though, I think a lot of similar in fantasy is due to the fact that we’re all ripping off the originals - history / ancient mythology and the reason for that is that it was forged out of the human experience and contains age-old motifs that resonate with us and are broadly relatable. That and they just were there first to lay claim to a lot of the cliché cool ideas we continue to recycle. I majored in ancient history and, like I me, I can tell Erikson really digs ancient history and myth and was heavily influenced by it.

I actually find that totally plausible. Erikson himself has a degree in archaeology, no doubt he’s drawing on centuries of motifs and images. And he has much respect for Glen Cook, clearly that’s a series I need to read at some point.

So rather than saying X influenced Y, maybe this is an example of parallel myth-making in action. They’re both expressions of some deeper current of ideas that have accumulated over time.

The biggest coincidence IMO would have to be John Bourbon and Whiskeyjack. I thought for sure this one was a deliberate easter egg.

All-in-all, thanks for the insight into the genesis of these concepts. This game’s imagination keeps me coming back year after year and I ponder over the lore anew with each playthrough.

The ultimate question is, how was Scorv made?

Wow I thought I was pretty into the lore but totally missed this. Is this ‘madness’ what corrupts Aetherials like those which possessed Warden Krieg and Theodin Marcell? That’s pretty neat to think about. Likewise I assume there are some people better capable of resisting it, which are probably inclusive of (most) of the NPCs we run into (except Direni?) in towns.

its very possible that ch’thon’s madness influenced the aetherials indirectly through their host bodies. the wicked hosts are closely more attuned to ch’thon’s suffering, which makes ch’thon able to control them more easily.

makes me wonder whether empyrion should be blamed for shattering and banishing ch’thon to the void.but maybe he and his celestials did it so that they can create and control the mortals while at the same time humiliating ch’thon (who is dying but still alive) even further. celestials are weird. why not just chuck ch’thon into yugol’s mouth and migrate to another galaxy?

i find the connection to the supernatural tv series intriguing. gonna watch that show to see if their pissed of angels closely resembles the aetherials.

You need to go through a handful of seasons until they appear. I think they indeed are kind of similar to aetherials.

A bit off-topic, but I haven’t seen anybody ever mentioning the resemblance between aether crystals and tiberium from Command & Conquer: 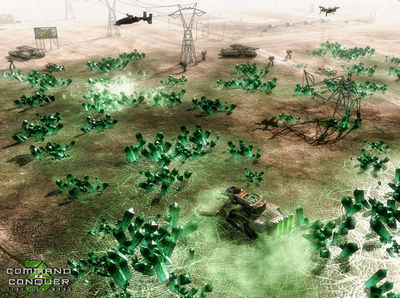 Where did these crystals come from in development? They’re one of my favourite parts of scenery. Oh, and the sounds they make too!