no Reduced Target’s Resistances so maybe you could go for Scales with your Vit to Chaos and Fire conversion: Archon, Level 100 (GD 1.1.9.6) - Grim Dawn Build Calculator btw reminds me of my Chaos FS with the other Barthollem’s weapon

did you try this version Archon, Level 100 (GD 1.1.9.6) - Grim Dawn Build Calculator
it’s basically the conjurer that broke crucible after 9.6, just turned into an archon, that’s the similar savagery idea i had

Broke Crucible after 9.6? I remember some old pass-through (which is no longer on Desolator since 1.1.9.6) Upheaval builds but isn’t it the past?

idono maybe i remember wrong/lifted the wrong build, could have sworn it was from 9.6 test patch/spring when passthrough removal/changes was tested

- which explains why my archon has desolator instead of full harbinger

- this is the one i was supposed to repurpose into archon https://www.grimtools.com/calc/lV7kQOaV has the passthrough items

edit, take MadLee’s vit EoR oppressor and make it warlord and tweak some stuff here and there

happy to report stable Vitality Warlord Warlord, Level 100 (GD 1.1.9.6) - Grim Dawn Build Calculator
leave it to MadLee to make such a solid Oppressor build you can turn it to Warlord 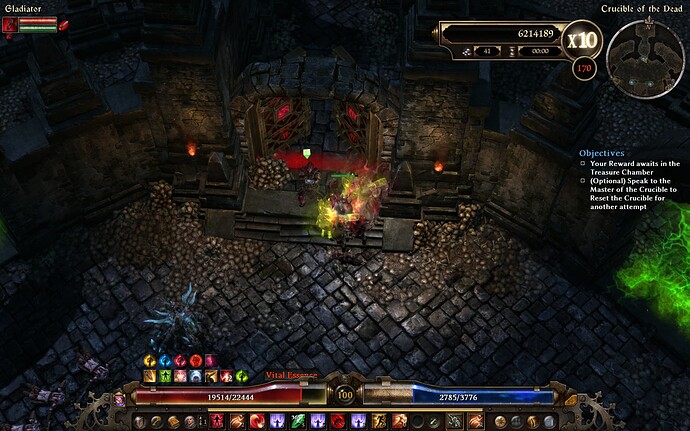 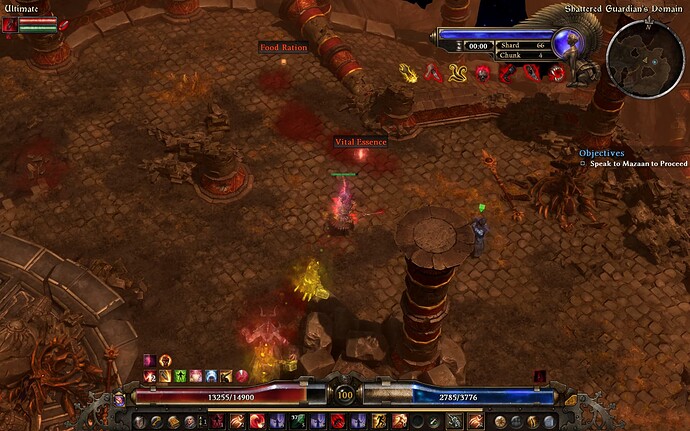 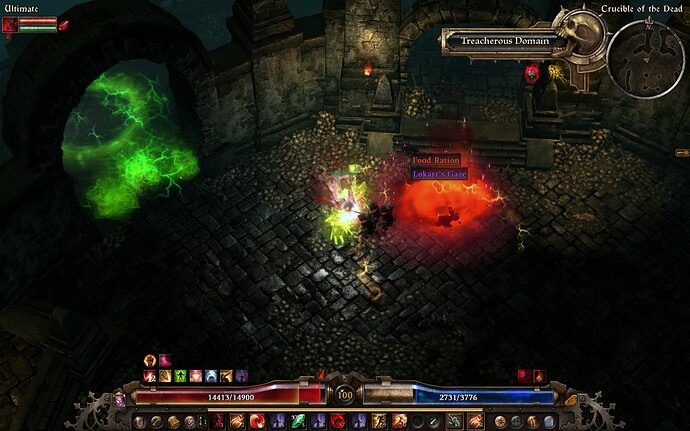 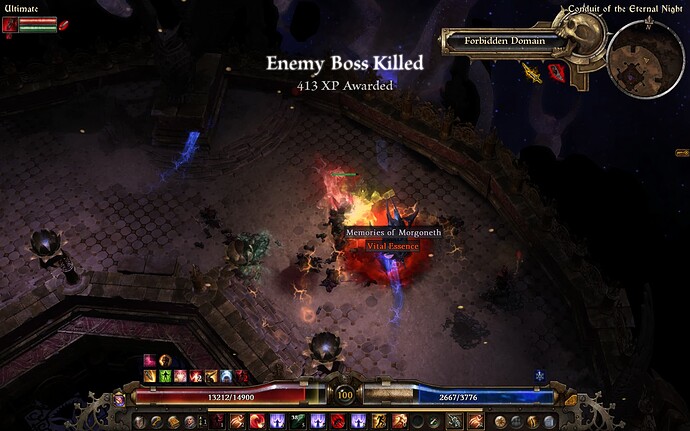 Some untested ideas that may be useful for meme bleed build

The Spellbinder looks promising with the bleed SS mod for tanking, but the Saboteur will feel like a natural DW build with extra caution against reflect mob, meanwhile the Pyromancer… it uses DEE to spread bleed damage, so questionable at best.

Has obviously a rather strong Oathkeeper focus, but Shaman provides some good defensive stats and a bit of flat damage. As Archon, a large health pool is also a must. Damage is rather good (270k sheet), resist reduction is rather low (only provided by one ring and devotion).

Korvaak is a non issue 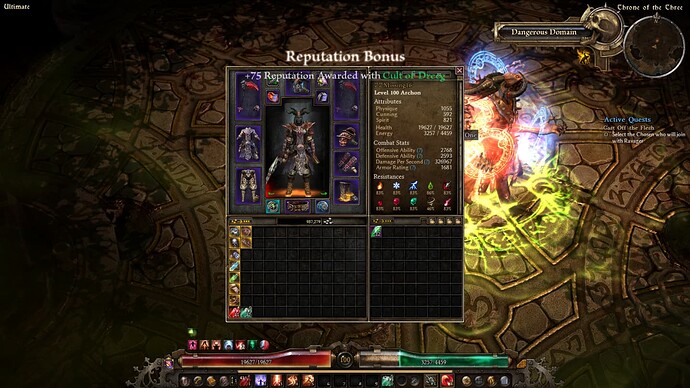 Shattered Realm 65/66 in time without death, SR 80 could be completed (with quite some deaths in one shards to a group of heros - two in the boss room). SR 75/76 felt relatively good, had however one death after a Arcane hero debuff (non in the boss rooms). 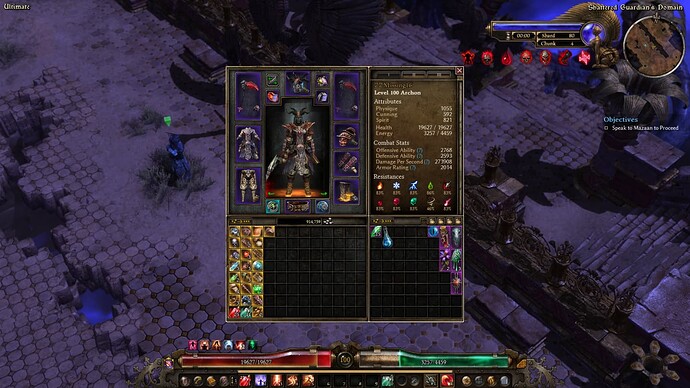 And as bonus, also tried Lokarr - possible without death (only reached once a rather uncomfortable low health level) 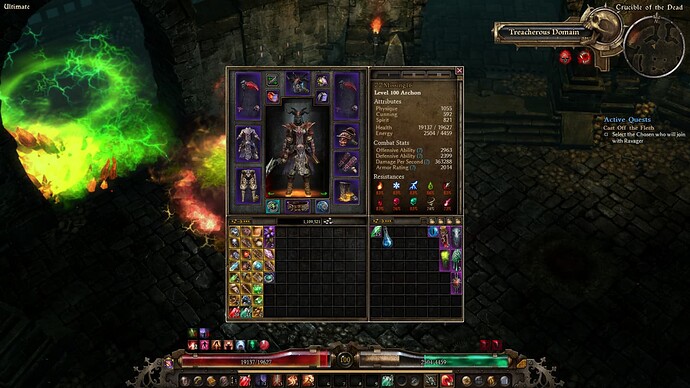 So, finally, the fourth Chaos Archon is imho sufficiently good to complete the Archons.

So, finally, the fourth Chaos Archon is imho sufficiently good to complete the Archons.

It shall be so.

We now have 29 builds left: There we can see what’s the hardest to accomplish:

Masteries:
Almost half of them (14) are Arcanist
11 are Necromancer
10 are Demolitionist
8 are Oathkeeper (In fact, all the missing builds feature at least one of those 4 classes)
6 are Soldier
4 are Nightblade
4 are occultist
3 are Shaman
(Inquisitor is complete)

Hmm, for pierce what I got in mind for Arcanist is using Gildor’s Pulverizer and Bladetwister Signet together with Star Pact to reduce TSS cooldown and rely on crit damage. Gildor just received casting speed too in the latest public test, and there is SR set to complement the defense and skill, at the cost of conversion from aether or vitality.

For the Demolitionist, Soldier, and Oathkeeper using the Valdun set for an easy 50% WPS can be the base of the build, and those 3 class already has auto-attack skill.

With this, looking back at the list, pierce suddenly feels complete.

@DeputyChuck How do you feel about fantasy? If I were to make a build, should I try to restrain myself to more or less realistic items
as if making a standard build thread or maybe you do not care at all and everything’s allowed?

There are stashed builds made by @Gnomish_Inquisition and they are accepted. I think everything is allowed.

How do you feel about fantasy?

If you keep it to one rare affix per green, I’m ok with whatever they are…

I’m also ok with like… ONE double-rare green if the rest is more or less realistic.

Stashed builds are ok, as long as they could be farmed within a human lifetime

I don’t want to police this thread, which is mostly about celebrating creativity, but I’m not gonna be impressed with an all-green build featuring 3-4 fantasy double-greens…

Let’s keep it within “Vegas odds” of RNGesus, if that makes sense

Calling dibs on Acid Wurdur. Stashing and testing will take me a couple of days.

The sheet damage looks rather low, but the effective damage is acceptable (dummy kill time ~26/27sec). Build focuses on Righteous Fervor and the mods to Smite / Markovian Advantage and Shattering Smash - the movement rune and Aegis of Menhir are worthwhile in between damage sources (~100k per usage). Skill points are rather rare - so the investment in Overguard is lower than wanted. Markovian’s Defense is taken to strengthen the defense (and the cooldown period is feelable).

Korvaak is a non issue 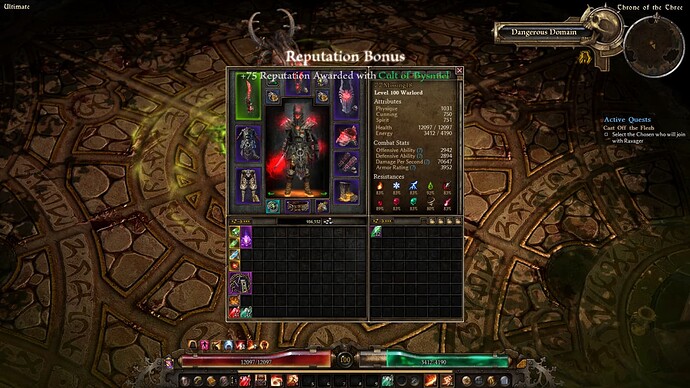 SR - started with SR 65/66 - playing rather aggressive, run was not deathless, but the build looked promising. So raised the stakes and tested the build in SR 75/76 - first run again not deathless, second run in time and deathless 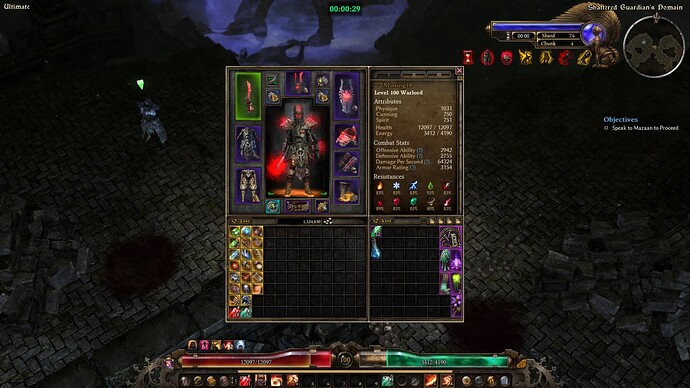 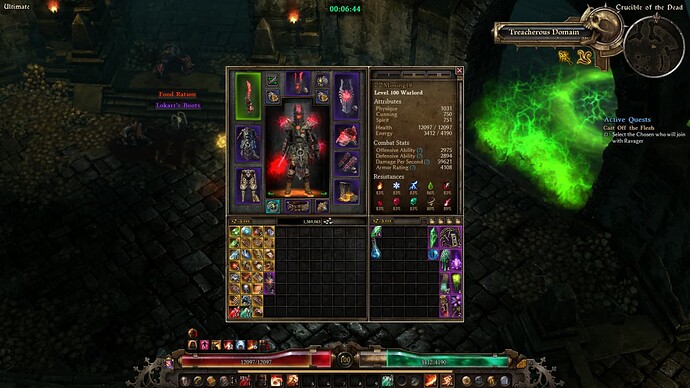 Sometime the build has a bit of life - YoYo issues, half of the life goes down to get to 100% again after the next own heavy hit (had this ~5/6 times against Lokarr). But the build can be imho played rather safe if careful and avoiding to be absolutely surrounded - and for certain enemies - using kiting / hit & run (Grava, Gargabol)

Warlord used to be the least complete class, and now it’s one pierce build away from being complete