CREDITS
Thank to Jiaco who made the R scripts to generate those dbr affixes. 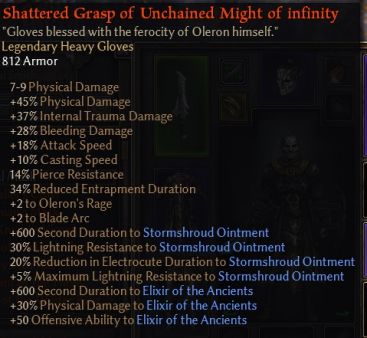 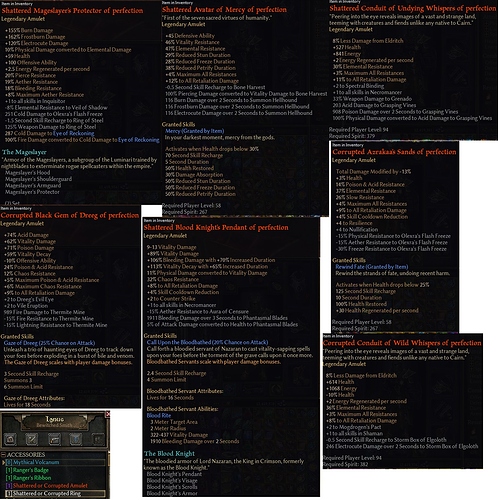 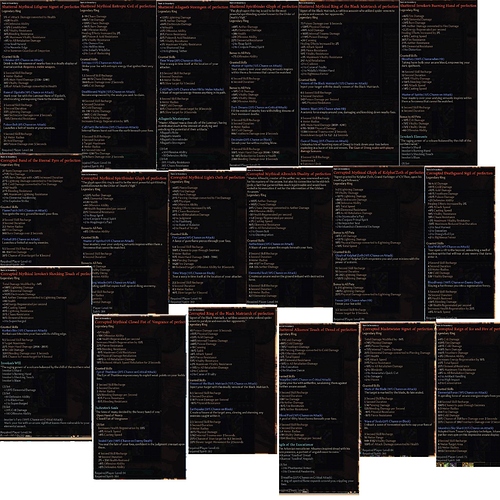 set input.path to a dir containing records to scan, use recursive = TRUE or FALSE as needed

set output.path to the location to write the dbrs

be sure to have the base prefix dbr in master.prefix.path

Download on Nexus version 1.4B
CREDITS :
Thanks to @Mendez42 for all these changes

CHANGELOG
Shattered Affixes 1.6
Required to be compatible with the new patch 1.1.5.0

Now at SR level 100 a Shattered chest spawn on the player.
You can choose to open it at the cost of 5 shattered orbs.
It can drop one random shattered jewel : ring, amulet or medal.Medal can have the same shattered affixes as rings or amulet.

At SR level 110 the shattered chest also requires 5 shattered orbs to be sacrificed.The chest can also drop a legendary weapon with regular affixes of the corresponding weapon type.

Uploaded new version 1.6B
Fixed questevents.lua with the latest version , it seems I was missing one questevent, sorry for the inconvenience.
This line was missing :

In order to maintain a better compatibility with future game updates and other mods (like grimarillion) , I will remove questevents.lua from the mod.
Don’t worry, it will still be compatible in MP (multiplayer)
The script will spawn a chest based on SR level and this chest will reward orbs or shattered items for each player in the party.

Shatered Affixes 1.7
Now doesn’t use questevents.lua in order to be compatible with future game updates.

The reward is now a loot orb containing shattered orbs or a locked chest (need to sacrifice 5 shatterd orbs to be opened) droping one random shatterd item with random affixes depending on SR level completed.
Each player should receive the loot but I didn’t test it in MP.

Love the idea but personally think it would be nice if shattering orbs were available from other places & more accessible. It’s a bit to late in the game at the moment in my opinion. Anyway I don’t see the amu / ring recipe which can be used with targeted item, at least not at the conclave blacksmith.

@Sairon Did you look into the accessories and consumables tab ?
That’s where the amulet / rings recipes can be crafted in the blacksmith Ignus at Conclave of the Three.

I did, I tried to fix it myself but no dice. I scrolled through all his pages checking for it. I’m not at home so this is going by memory but I checked the amu / ring blueprint folder & found a recipe there which I’m almost certain are the correct ones. I then checked the blacksmiths in the npc folder & sure enough the ring / amu recipes weren’t present in the default recipe array for any of them. I altered this array & added the blueprints, but they still don’t turn up at the blacksmith. Perhaps one needs to edit something else for blueprints to show up besides just this array?

I think for rings & amus it would even be better to remove all the ring / amu specific recipes entirely since the unified recipe would be superior in every way when it works ( heck of a lot of scrolling to find the correct ones without it ). Looking at the console I also got some errors about some missing craft files after interacting the blacksmith. Those seem to have nothing to do with the amu / ring recipe however, I can check those when I get home as well.

I’m using the nexus mods package which seems to be the most recent version?

I don’t understand the issue.
You can craft rings / medals at Ignus.You can choose which specific ring / amulet to use as a reagent (it will be sacrificed).
Then the outcome is random if you choose a legendary ring you will have a chance to craft a random legendary ring with shattered affixes, if it was an amulet you will have a random legendary amulet with random affixes (including corrupted affixes).
The old recipe to craft a random amulet from any amulet has been removed because if was removing a random amulet from your inventory whithout being able to choose which amulet was used as a reagent.

Ah, I was misunderstanding how it worked. I thought there was a single recipe where you could select the ring, of course in hindsight that wouldn’t work because you can’t drag & drop an item into the crafting UI.

I just notice that you are creator of omega mod!!!
That mod was my most wanted mod.
Do you have any plan for merge omega mod with this? or any plan for end game content like endless buff or attribute potions to here?

Currently I don’t plan to update the Omega mod.
Attribute potion are one of the Mysterious items that have a low drop rate from the locked chest on SR 110.
Currently they have around 1/3800 chance to drop.
I am not sure what would be the good drop rate.
Anyways they are now consumed on pick up so you can not give them to other characters.

Sad for omega mod. but good to hear that i can delve very deep and long time to collect mysterious items -0-. Thanks.

First off, this mod has great potential to add some endgame to grim dawn. Has anyone actually tried it?

I ran through a few 75s to get some Shattering Orbs and try the system. I also made a Softcore player and cheated in a bunch of Orbs (I only play Hardcore).

I feel like no one has actually tried this mod, because while it is a cool idea, the “balance” is out of whack. On my first legit try, I rolled my Visor of Octavius for my forcewave build and got lucky and rolled two affixes; the Star Pact one and the Phantasmal Blades one. On my second try, I rolled a ring that turned into a Ring of Khonsar of perfection which got minus 13% total damage and a poison nova proc. Both these items were unusable.

I suppose I write the above to support my feedback, which is that the randomness of the system is its own balance and there doesn’t need to be another layer of randomness where your item gets destroyed or corrupted. The chance that you get affixes vaguely complimentary for the item that you are rolling on is so low that chances to destroy the item or “corrupt” the item on rings is overkill. Also, is it intended that rings and amulets get rolled into a different type of ring entirely? I assumed that I would be getting the same kind of ring/amulet back and not a wholly randomized item.

It takes a long time to do shattered realms, especially at the higher levels and it would be more worthwhile to do them if there was a guaranteed reward, even if it was unlikely to be complimentary. Putting another elemental of randomness seems like overkill (namely the 90% chance to corrupt your ring/amulet and changing them into a different ring/amulet; low chance to get shattered affixes on armor items and high chance to destroy them) . I feel the same way about the ultra rare items from the 110 box (even though I haven’t gotten that high yet). You could make the coolest items ever but if the drop rate is so low; does it even matter because who is going to see them?

Thank you very much for your feedback Kral, so I could simply do the following changes to fix what you are saying :
1- Remove the corrupted affixes (I would set the chances at 0 so if anyone want to modify it will be easier)
2 - Remove the destroy chances (set the chance at 0)
3 - Make each ring/amulet recipe turn into the same ring/amulet.

The first two changes are easy to do, while the third one requires making hundreads of different files.
I will consider making at least the two first changes at some point, but I am currently playing PoE so I don’t know when.

Yeah, that is what I am suggesting; plus maybe increasing the chances to get a double affix (although when I was testing it, it felt like much higher than 5% to roll two affixes, so maybe it is ok?). I really like this mod but I feel that the extra randomness on top of the randomness of the already huge loot pool is discouraging.

I don’t know what is in the 110 chest (I would probably have to cheat a character to get up that high right now) so I don’t have a real opinion on what drops from it; other than the fact the stat potion at 1/3800 might be too rare.

I really appreciate this mod and thank you for all your hard work. I’m going to go do some SR now and maybe start a new character to climb higher.