This is not a very easy Layout, not clear to a new people, do you not want to attract new players to your game?
Hey you say it is easy to find Guides, cause you know how to use it…my point is new players are not going to even bother, they are gonna quit.

I can’t help but disagree with the most Part of your Arguments.
First of all “Easy Layout” is absolutely Arguable, and most People yourself included argue at this point with a certain bias. If you are used to a layout for 15-20 Years, than no matter how good the new Layout / Forum-Type is or how bad compared to old one, simply for the fact you are used to the old one, you will have a easier time. If you take a step back and look for “real” newcomers which never was in touch with GD’s old forum, and / or overall don’t have much experience with the classic-style layout / forumtype, AND if you take your time as a “old user” to get into the new type of Forum, you will definitely see the qualities of discourse, and i’d go as far for Newcomers it’s more accessable and easier to get into.

You can believe me that i struggled with the new Forum as someone who used the classic Forums like 14 Years, even so far that i really disliked it at first and never got into Gearbox Forums anymore once the shifted towards Discourse. However this past Months of getting used it, it kinda grew to me and now it’s on par with the traditional Forums, if not even in some regards better than the old one. Borderlands / Gearbox however was a different case, because i wasn’t as geniunly invested as in Grim Dawn to really bother, which leads to my next Point.

Most Newcomers and Average People won’t use Traditional Forums anymore anyway. I’d say the first place where such individuals visit and most likely stick to it, simply due it’s fully implemented feature for a tool which you need to play the game anyway, is the Steam Forum (except GoG Users obviously). I’d argue most People who go as far and go to an official, browserbased Forum have overall enough interest and will to get used to a new template / layout / forumtype. So from my Perspective, the type of players you argue won’t bother with the new forum, wouldn’t bother much for the Forum overall due they would visit these forums rarely / casually and as such, aren’t really the target audience. Combine it with the Fact that the Devs like the new Forum better, and regular users seems to like it (or don’t mind) the new Forum, i’d say it’s not a big loss if such people as yours mentioned would “not bother”.

For a moment I thought I was in the “How to use the forum” guide thread.

BTW, do we have such guide here?

As stated by @powbam, it’s still “Work in Progress”

If you need further guidance then stalk powbam, he gives useful tips on using the form effectively. But you might have to sort through his “other” posts so trad carefully. You have been warned.

I am sure this has been answered, but every link I click brings me to the forum homepage for some god awful reason. After disabling my cloud save my characters disappear, where do i copy them from/to?

If you were using old links you found via google then yes, the links are broken because Crate moved the forum to a new platform after the old forum came under hacking atttacks back in May which caused the loss of 18 days’ worth of posts/threads. To find the threads again simply do a search for either the title of the thread if you know it or use keywords to help find it.

As for moving your characters from cloud saving to local saves:

Finally go into forum, and now I get randomly logged off. 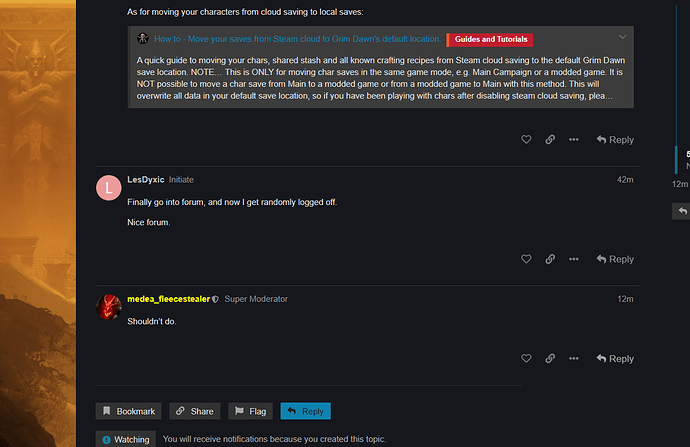 I can absolutely guarantee that I did not create this topic.
(See the “Watching” info at the bottom)

(after logging in again)

It says you created it. And the forum never lies.

Hi. Is there a way to “find next” when searching for a word in a specific topic? Similar to ctrl + f, F3??

Hi. Is there a way to “find next” when searching for a word in a specific topic? Similar to ctrl + f, F3??

You can’t use the “traditional” method in a large thread (like this thread, for example) on a Discourse forum. This is because not everything loads all at once so the old method won’t work like that.

The best way is to do as shown in this screen below: 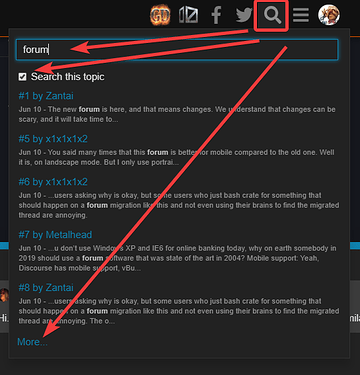 While I loved the art style of the old forum, I have no problem with the new changes in the least, I’m just glad you didn’t default to a blinding white palate like so many have done!

Maybe I am doing something wrong, but here is my feedback. Is there anyway Crate can fix the forums that when you click on links it takes you to the actual post? Trying to find builds in other venues and clicking the link, only to find the “homepage” is frustrating. I want to see the builds. Tried to put the post# in the search and not sure what it sent me to, but don’t think it was right thing. Again, sorry if it’s me and user error. Really new to the forums and trying to learn. So please, feel free to me what I am doing wrong.

If there is not anything wrong and that’s how the forum works, is Crate working on a fix for this? Estimated time to have this fixed? Thanks for any help! Still loving the game and all the work you all do. Just gets frustrating not being able to find the posts I’m looking for. Thank you!

This from the GD Discord

yes well I’ve requested the google bots to scour the gd site for updated search results and yet here we still are months later
we’re probably in some queue of 1 jillion websites, eta sometime before the sun burns out

Thanks! I really need to sign up for the discord. Always forget, until you point it out to me. This is, what, 3rd time? Hehe, I will do it…eventually!

Is this real or am I dreaming? I thought I got onto the wrong site for a second. First I couldn’t even tell what to click to get to the actual forum on the forum home page, then I couldn’t find the search button because it’s up there with facebook and twitter cancer for some reason. Infinite scroll is AIDS. Discord integration is AIDS. Google integration is AIDS. Your “modern” UI is AIDS in every way. I couldn’t possibly anticipate a UI that’s worse that beta Sankaku, Nexusmods, or new Steam update, but you did it, you actually dun did it. Web archive snapshots of this will exist for all eternity for people to easily get eye cancer when they get tired of it all. I came looking for an old Titan Quest build compendium and I just changed my mind, I can’t spend a single second more on this site. I just homed in on this thread and I’m going to close this page forever once the reply is sent.

I wonder if this loser realizes he didnt say anything new, that web snapshots reach practically nobody, and that despite infinite scroll being shit, linear-time navigation is still very much possible within the current syytem.

It amazes that people can feel this personally attacked by a freaking forum UI, lol.

I came looking for an old Titan Quest build compendium and I just changed my mind, I can’t spend a single second more on this site.