I have a question , Is this mod’s Shatter Affix work with another mod class too ? or same main class only ?

To anyone who is crashing, turn off auto item tooltips. It helps for some people but without any rhyme or reason to the crashes I can’t fix it. Telling me “it crashes here here and here” doesn’t help because there’s nothing changed in the map that could cause a crash that wouldn’t cause a crash in vanilla. Unless you can replicate the crash 100% of the time and know exactly what is causing it, like a specific item drop or something… I can’t help. 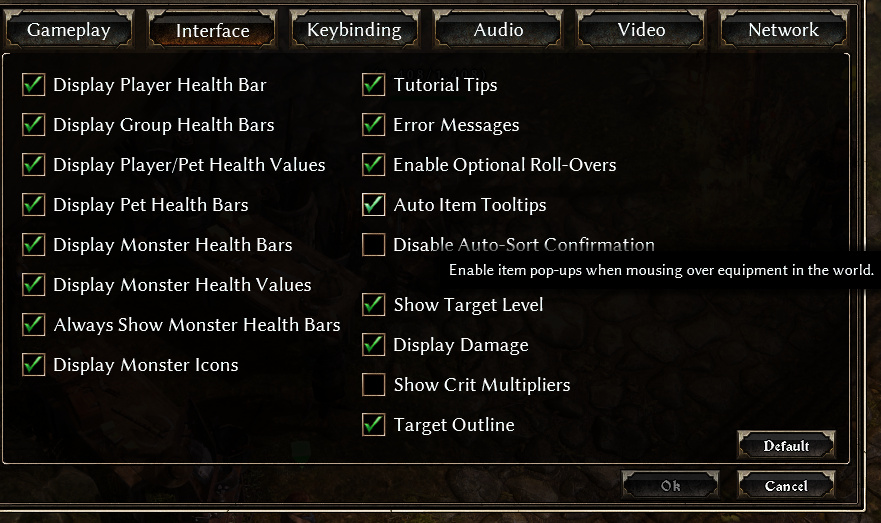 @lizardlucas Skilltree_expanded has been posted on the forums several times already, you just need to search for it…

Here is a template file for interested modders. Since I could not attach file to a PM, I leave it here in a thread for others as well. As to its purpose, well, all I can say is you need it to build Cornucopia. Just unzip the attachment and put it where all the other templates live. Attachment: skilltree_expanded.zip

Thank you very much for the file!

ASYLUM101, there’s definitely something in Port Valburry when playing Grimarillion, another crash with no other mods active besides Grimarillion (Auto Item Tooltips off).

I spent part of this afternoon trying PV with mods like DOM and Vanilla and it never crashed but, as soon as I switched to Grimallion boom, crach again.

I don’t know how to desribe but, this time it was in the begginig of PV, I opened a small box and it dropped something that unfortunately I didn’t have time to see what it was. Besides that, it wasn’t a place with too much crowd or too much action.

It’s probably the 6th or 7th time in a row that I have a crash with different chars. What was consistent in all of them was that something was dropped or from boxes or from enemys dying, one of the times was a rifle but I’m not sure if it was the same item in all other crashes.

Unfortunately it’s all I can give you as a feedback.

Asylum, Thanks for the tip - I was having crashes left and right and just trying to power through it…
No crashes since making the suggested change.

Like I said, from the reports I get there is no rhyme or reason to the crashes, just random areas, random things. Supposedly happens when items drop but no one can say what items are the cause, and I’m not willing to sift through god knows how many items and possible affixes to figure out what it is. Is it a component? A specific legendary? Specific green affix? who knows.

Turning off item tooltips seems to have helped, thanks!

I feel like every year I come back to this mod and rediscover how awesome it is. Thank you for all your hard work Asylum, it is well worth it.
I was planning making a Wizard/Earth Magic Missile build, but I am falling in love with how good Rupture is and might remake as a 2 handed soldier.

I noticed Defense Batter and its synergy did not have UI connectors.
Squall unlocks at lvl 10 rather than at level 5.

I noticed Defense Batter and its synergy did not have UI connectors.
Squall unlocks at lvl 10 rather than at level 5.

Yeah, these are known issues and are slated to be fixed for the next update. Thanks for the report.

Cool. Earth Mastery WPS with the 360 attack works with ranged weapons but still uses the melee animation. So your character twirls in place with his rifle

I know zenith is not your mod, but is there any way you could remove the screenshake from the Necrotic’s Reign of Chaos skill? The shake after every single meteor hit is pretty nauseating

I also noticed that one of the conversion recipes for a low level item produces a 1H version that has a higher level than the 2H, Wildcaller’s Decapitator is a level 20 item, but the converted one comes out as level 30.

I know zenith is not your mod, but is there any way you could remove the screenshake from the Necrotic’s Reign of Chaos skill? The shake after every single meteor hit is pretty nauseating

Bug Ceno about it, it’s his mod. If I do it, then people are asking me to do this and that and I’m not willing to go down that slope. I have my own mod to worry about.

Is there a way to add Crusader conversion recipes for the Titan Quest themed items / are there plans for it?

Not happening, there is no cross mod support and never will be. Grimarillion/DOM give you a “playground” to mix mods but there is never going to be cross itemization or whatever between them.

Then why bother combining them?

Because there are still a ton of viable combinations you can now play and otherwise couldn’t. There is no need for the Crusader to have every possible 2h weapon as a 1h alternative for this, at all.

fair enough. I actually got art manager set up, tracked down and fixed the offending projectile effect before realizing there is literally an option in game to disable shaking.

Are you interested in UI bug reports? I’ve been keeping track of skill descriptions which don’t match their skills but figured you might already be aware and just not updating descriptions until skills are fully set.

If it’s for GQ classes, sure.

Then why bother combining them?

Because … lots of people asked for it. That simple.

Having some problems with Spears.

The Chiron’s Teaching transmuter for Herbal Remedy (Hunting Mastery) says it reduces the cooldown for 2H and Spears.
It works to 2H but doesn’t work for spears.

I also cannot use the Scorpion Strike from Glyph of the Scorpion skill with a Spear, but it works for other weapons.

I think these are all just minor skill description inconsistencies i found.
Hunting - exploit weakness skill description seems to be for a different skill
Defense -Vengeance, same thing.
Spirit - Dark Covenant has a warning about life drain that isn’t part of the skill any longer
Rogue- Calculated Strike and Lucky Hit both give piercing, so you end up with 200% chance of going through target
Flash Powder references “Shrouded in Shadows” when its base skill has been renamed Grace of the Korybantes
Netherstrike gives 100% conversion at lvl 1/3

Hey guys, found a bug regarding the awesome “Aegis of Valor” set.

The +1 skills to Crusader are not working. Could you please take a look? 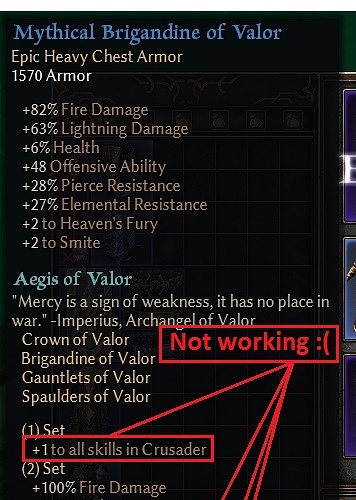