Hi, I am having an issue with a crafting recipe. Ellena’s necklace does not register when attempting to craft LeviathanZE.

Here is the screenshot: 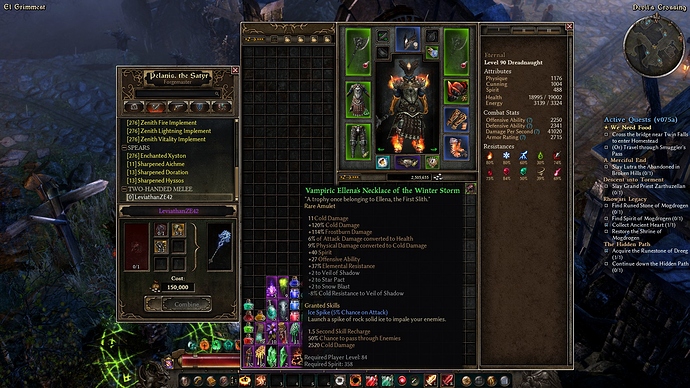 You don’t have to play through the game multiple times anymore. Idk when the last time you played was but you can buy merits in the Forgotten Gods region to give to low level characters and it allows them to skip difficulties and gain some quest rewards from the previous difficulties.

It’s an old blueprint recipe from before AOM, it doesn’t work with 75+ versions of the necklace.

Hello ASYLUM101.
I am glad to see that you keep up to date this mod,time to play GD again , almost a year since the last time i played GD in general. Now because of the Covid19 i have at least 15 days to enjoy video games .
And also i want to create my own mod from scratch , not a big project just some minor changes and i would apreciate if you give me some advice about the following:
1 - Creating a single difficulty where all the shrines and quests are avaible + increasing the Devotion points from 55 to 70 ,also adding some shrines in some areas .
2 - All shrines to be desecrated like the Mogdrogen Shrine(Material Requirements and monster Spawn )
3 - Make act 1 - 2 Veteran difficulty ,act 3 Elite , and from act 4 to be ultimate(If Possible).
4 - Increasing the hero spawns and the exp so at the end of the game to be almost max lvl.
5 - Modifying some quests to be avaible in that unique difficulty ( more atribute points and skill points to compensate ,Lutra Quest, Path of the 3 … )

I want to create a mod like this because i like to complete ,map,quests,shrines one time not to be obligated to change the difficulty to gain the atribute points , skill points some quest give,devotion ponts and also the quests that are restricted to ultimate .

I have no idea about modding and the only thing i did for the moment was to read the tutorial witch gave me the impresion that i need to copy the base game files and modify them(No idea what should i copy,what to modify and how to modify them).

To be honest most of what you want is already in the vanilla game/Grimarillion. As Asylum101 said with the Forgotten Gods expansion you can now get merit tokens for other characters to use so they can skip straight to either Elite or Ultimate difficulty (with the relevant resistance penalties of course). You also get all the attribute/skill points you’d get from doing the quests on the lower difficulties.

All shrines Grimarillion are already desecrated ones and with FG there are now 157 in total across all difficulties: 59 on Ultimate alone so you can get all 55 devotion points with one playthrough.

With Zeke from the Grimmest mod in Grimarillion you can up the difficulty so can easily reach L100 long before the end of the game. It’s possible even in the vanilla game with both expansions.

First - I wanted to create a mod to satisfy my needs (Stil working on it one hour a day and i apreciate advice from anyone who wants to help me,)
Second - Had an old version of GD and had no idea about the expansion and the “Merits” ,nice stuff .
Third - I realized i had to update the game after downloading the Grimarillion Mod

Not knowing about the new things in the expansion and mod made me start learning how to create my own mod.
I added new rewards to some quests,Ex Kasparovs first 3 quests give each one as a reward 1 skill point and the Formula quest give Atribute reset potion.For now i modified 9 quests in act 1 , 6 in act 2 and 1 in act 3 .Some of them give Mandates and some give exp potions.

Devotion limit increased to 70
The shrines i did not wanted to be all desecrated and what i did was to add more requirements to the ruined ones. Some of the ruined shrines give 1 devotion but are easy to restore , some give 2 devotion points but more stuff required to restore and some give 3 witch are harder to restore.The desecrated ones give 2 points all.

Made 2 ultimate/elite quests avaible to normal .

And now i have to figure out how to increase the hero/champion spawns in game , modify the exp for character(At the end of the game to be around 90 ),factions and the items drop.
Think i have to modify stuff in gameengine.dbr

PS just saw a video with a guy that has the expansion and in his quick run he had to restore the shrines in normal - some in Elite and after started Ultimate.My point is to make a difficulty, in this case the Normal one, chalanging enogh and all the stuff avaible for completing all the quests ,map,devotion etc .Some things already exist some not but what i know is that i am happy with what i did in 3 days and having fun creating my mod 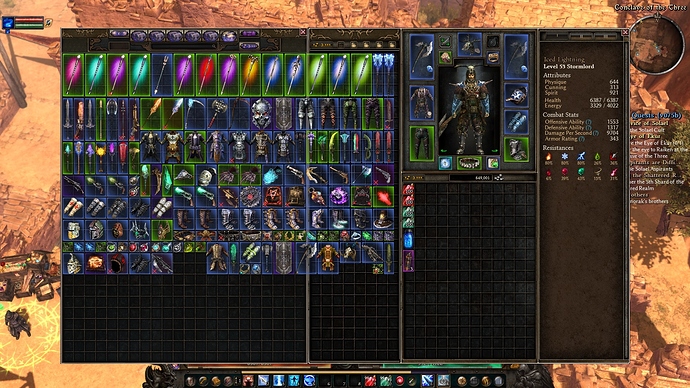 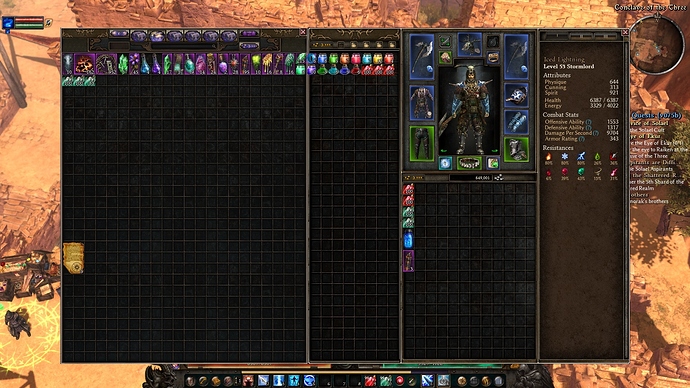