So this results in more mobs spawning ? I guess given that it is a script which basically copies the existing mob rather than changing the spawn pools it actually does…

Looking through the code it just respawns the monster again, but it seems to limit the amount of spawns in the resource files so, basically it would spawn the monsters, but then would delete the objects that went over the max amount of spawns. That is how I’m reading it anyways, please someone tell me if I’m wrong.

I’m sorry, please continue your discussion. It was so funny to me I couldn’t help but make the joke. I didn’t actually double it twice.

A post was split to a new topic: How to make an Arc file

I can’t find any korvan secrets. Is it a bug?

So after the last patch I lost all my characters/stash and am having to rebuild. Is the Krieg armor set no longer available? I’ve been farming the three bosses for a while now and I’m not getting a hit. I’m thinking it may be because of the increased number of armor sets slowing things down, but just want to make sure I’m not wasting my time.

So after the last patch I lost all my characters/stash

If you are referring to the last Grim Dawn update… you most likely didn’t lose your characters or stash. I’m guessing you have cloudsaving enabled? There’s a bit of a wonky bug with game updates that muddles the game’s cloudsaving settings. First, try making sure both cloudsaving settings match. There are two locations you need to check in - one is in the game settings and the other is in the Steam GD settings. 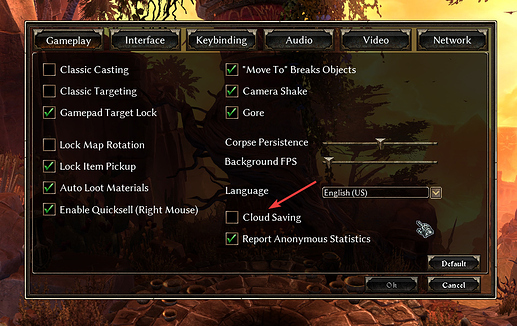 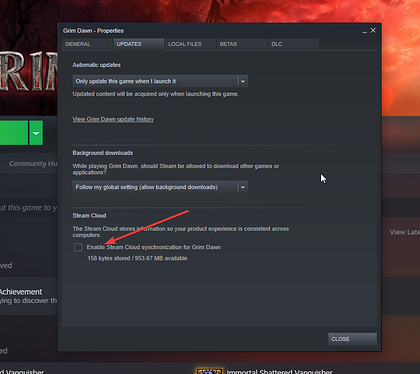 And now, to wait for Matougi’s Rainbow file

What level(s) are those new sets?

I’ve updated the Skeleton Overlord in the build Compendium - it looked like it was one of the more popular builds I’ve posted, and I’m happy to make it fully compatible with FG and have it SR 65-66 viable as well!

I don’t know who is looking at my compendium, but I would love to hear if anyone is enjoying the builds I’ve posted. Getting 20+ builds updated is tiring work for sure!

I knew I was forgetting something in the changelog. All the sets are 75/94. Divine (94) sets have skill modifiers, the lower variants do not.

It was an issue with my character losing all its skill points. I had turned off cloud saves before the last update, so didn’t have current characters to bring over. At this point I’m more interested in knowing whether Krieg’s drop rate has changed for everyone else, or just something I’m experiencing.

Have you thought about removing Soulbound from Augments?

No, and I don’t really see any reason to, just extra work for me

Just crashed three times in a row right next to the shrine of devotion in the Tomb of Nepthos. I was playing a lvl 37 Terror Knight.