I had the same GDStash issue and repacking the xpack.arc worked. While extracting the archive (with ArchiveTool.exe) I noticed that one of the extracted files was marked as (null) instead of the file name in the console. Extraction reported 1464 files in the console, while extracting the repackaged files only reported 1463 files in the console. The actual resulting directories are 100% equal, containing 1463 files. I’m assuming that one of the entries in the .arc is invalid. I do not know anything about the file format, so I can’t provide deeper insight. I assume that Grim Dawn ignores such invalid/null entries, while GDStash seems to trip on them. I’m not certain, of course, but this seems to be a lead at least.

Repacking the archive and uploading a new version of the mod should solve the issue. Alternatively, GDStash could be updated to handle/ignore such entries, if that is indeed the underlying issue. Maybe this information can help you identify the issue in any case.

The issue is slightly different as I saw it when looking at the arc via GD Stash. While there is one unused file (doesn’t have a proper name) at the end of the ToC, that file actually references a texture (and probably the one that should be referenced by the previous entry, based on size). You probably end up not having that file in your new arc.

The texture GD Stash is stumbling over is the one referenced by the second to last entry (for which this is the wrong texture, based on size and type). It is a format GD Stash does not know and therefore throws an error, but if the arc were correct, that entry would not be pointing at that texture in the first place - or there is some rule that I am not aware of that makes GD handle this case differently.

In any case, I hope the next arc won’t have this issue, otherwise I will have to take a closer look to see if I can identify a rule here that I can then implement.
But the problem as I understand it is that in the ToC one file points to a wrong texture with the next ‘nonexistent ’ file pointing to the correct texture of the previous file somehow. If there simply were an unused file at the end, this would not be an issue.

New Mastery !! Yeah ! Thanks for the update

@Grimer @okami29
hello! have one question - whats wrong with Monk skill Mystic Ally? seems like it doesnt work, can u check? thnx

Taking my time on these fixes, got a new bug report almost every day, but caught them all I think. 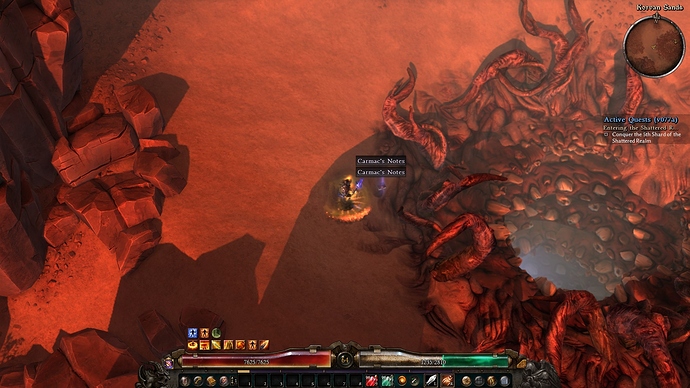 Ok, sometimes I write down the notes in the changelog as a “to do list” but apparently I never got to this one, I had the file open at one point but I suppose I forgot to make the change.

Functionally all the skills that had life leech should be the same, except now they will scale much better, which is probably a bad thing.

Noticed a possible? problem with an update to outrider with the skill “Providence” it lists itself as a requirement meaning you can’t grab it unless you have bonus points invested I’m assuming

Zenith needs the new changes.I personally would rather love Balance + item support rather than OP with no items support.I do not expect you to design items for zenith.Just Zenith class was way op.Didn’t try the new update yet.

Not sure what’s going on here, can’t see any weapon at all… 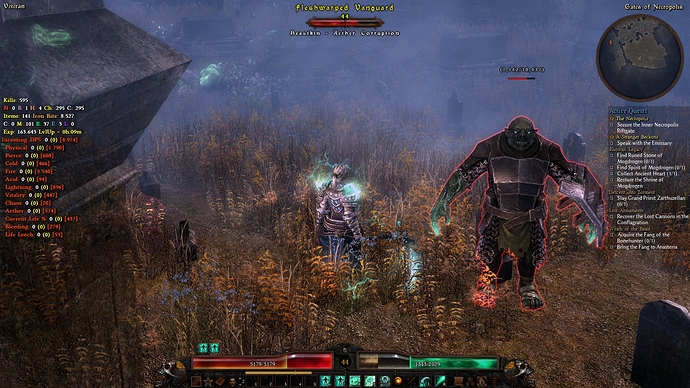 Edit: He dropped the axe “Skorn” which must be the reason for the T-pose, because I tried equipping it and it’s invisible when I do!

I have no idea what skorn is

Hi, i am playing a Pet Druid and i think a transmuter for storm nimbus that adds flat elemental damage and damage conversion for pets like Prometheu´s Gift (earth) or Occultic Venom (rogue) would be nice.

Edit: Perhaps even for Art Of The Hunt (hunting) for hybrid builds with piercing conversion for example.

How to play only GQ? GQ have old version only.