I’ve played with a handful of people here and am always getting questions about this build in MP, so I thought I’d share it here. First, I’m sure this is not the best build here, but I think it more than gives the majority of Lost Souls set builds a run for their money. At the very least, here is another option, a different way to build a viable pet cabalist.

I built a pet pyromancer that wasn’t bad, took the knowledge from that and applied it to a cabalist (and a conjurer, but that’ll have to be a different thread). Damage is centered around the Hellhound and it’s aura, that is mostly chaos, the Myth Voidwhisper makes the vitality damage from the skeletons / spirits (arms) useful, the off hand makes the cold damage from the Chillmane (amulet) and spirits (arms) useful chaos damage. I use arms that have the lowest amount of vitality convert as possible as I’m trying to keep the majority of physical convertied to chaos (hence the void whisper, Fiendgaze, and Consecated Blade skill). I’ve tried numerous weapons, but always come back to a pet friendly Salazar blade. The pet is synergistic, and has great debuffs / elemental resist for the pet army and my toon. In addition there is a good amount of elemental damage that is not converted, namely fire and lightning, so the toon has elemental debuffs where they are easy to come by as well.

This toon can easily farm 75-76, though it is squishy enough that it’ll sometimes be an adventure.

Damage output I’ve seen is as high as 2̶.̶9̶5̶ ̶m̶i̶l̶l̶i̶o̶n̶ (*edit closer to ~̶4̶ ̶m̶i̶l̶l̶i̶o̶n̶ ̶D̶P̶S̶ with links below, second edit - highest confirmed damage so far is 10.4 million DPS solo in SR95 as of 3/9/2022… also has hit ~3,000,000 DPS solo vs single target dummy) as is in the link below (scroll down, build has been polished in replies below). You can easily get away with a Necromancer or subjugator Bloodsworn Signet (much easier to find drop) and any pet friendly Salazar blade, though I like to go for OA. This toon does enough damage that I can run through SR100, even 105 and ̶e̶a̶s̶i̶l̶y̶ (errr, sometimes) have time left on the clock… for the first three chunks.

This toon seems to peter out around SR95 as far as nemesis level bosses go, just too squishy. That being said, “normal” level SR and team play, this toon is pretty good, just put a tank in front and let it do damage. 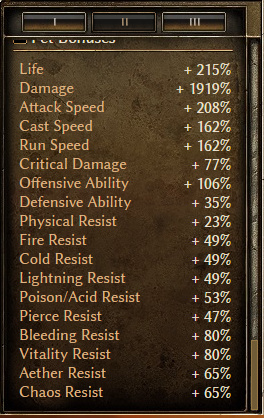 Ingame, no offensive temp proc’s active other than Blood of Dreeg: 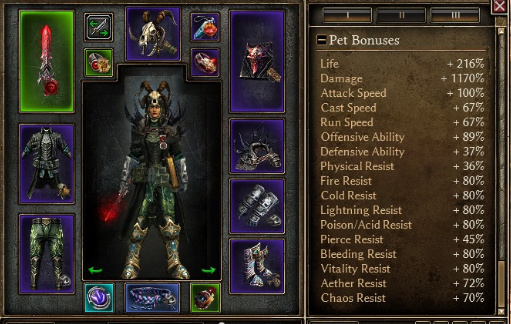 (toon has been updated slightly and is better in link below, OG here) 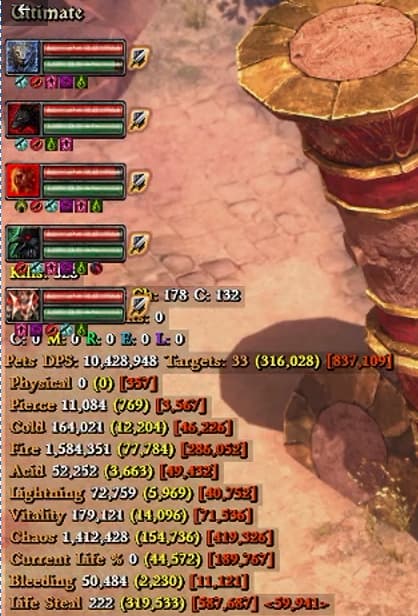 My devotions were already really close, but not quite the same… .stole the devotions from the pet conjurer in this thread.

I wasn’t fast enough to the ol’ F12 button, but I’ve seen as high as 3.9 million DPS (several proc’s not active in the pic below, but best I’ve managed to capture). Almost there…! 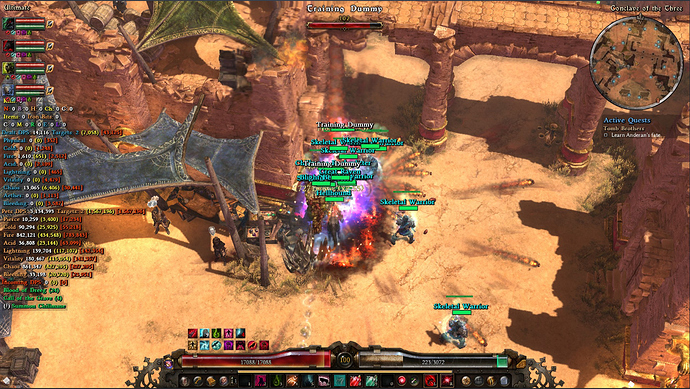 Captured in game with proc’s active 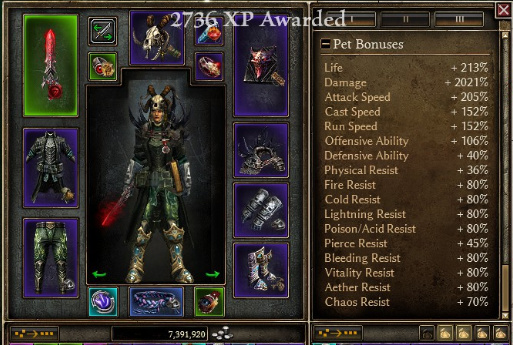 Playing with a couple of friends, getting some Field Command and Flametouched bonuses, and a few more. Saw damage hit 9.9 million, but this is the best I have been quick enough to capture a screenshot. Good stuff.

I suppose DPS is measured differently against dummies than with more targets? 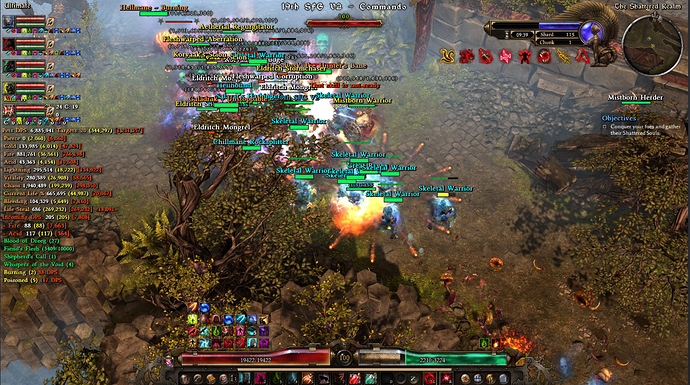 Using Primal Instinct (changed out from Bys Dom) and original devotions. Almost hitting 4 million DPS. And because it is mixed damage, not focused on one type, it doesn’t matter what I fight, they get hurt. 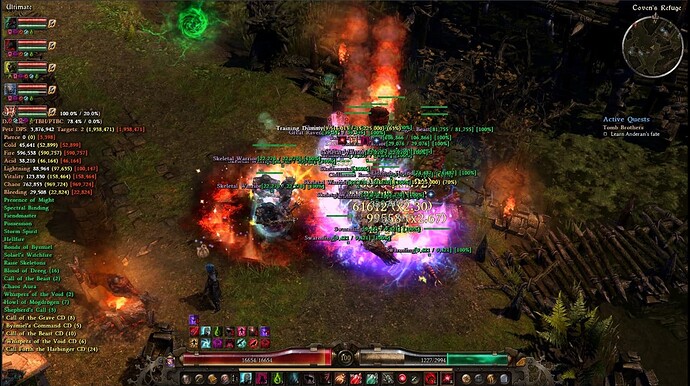 Some 3AM Ravager spanking. Crate still beat me up a few times this morning, but that one is next on the list. Think it’ll be doable. 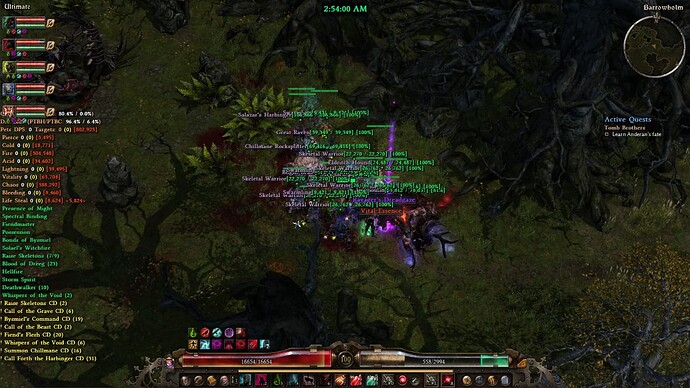 Ravager in 1:45, not the cleanest run. Will probably try and get a clean one on video, think I can shave a nice chunk of time off. I moved a few points around, using the Bys Dom in this version instead of Primal Instinct… no real reason, they both work well. Pulled points out of the bird, using it more as simply an aura for the skeletons and other pets (15 points in the line in total investment, 12 of those in the aura… heh). Needs a little more overcap, but all in all this version is pretty balanced and can still get close to 4 million DPS against the dummies in spurts. If only I could have a conjurer’s / ritualist’s phys resist… oh, to dream. 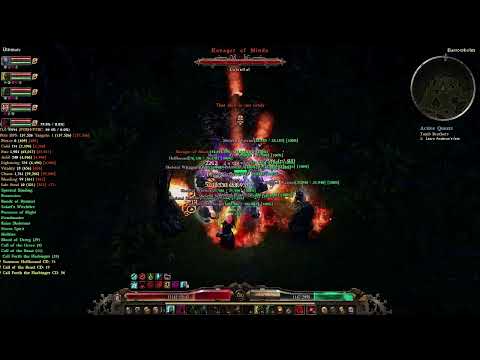 Made four Crucible runs, all were under 5 minutes, this was the quickest by a few seconds. I use a stonewall and vanguard totem to keep the pets safe and doing all the damage they can. Don’t feel I need that much area of coverage on the map with two more of those, so I use two stormcaller totems as well. Sounds good on paper to me, anyway. I’ve been playing around in the calc with a v2.0 of this toon using a few different pieces of gear, so this will be a decent measurement in some ways. Finished this run in ~4:40. 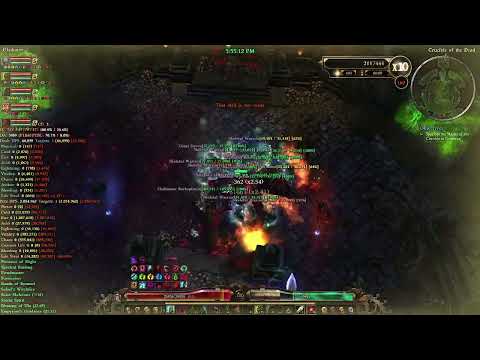 Playing with my buddy @FlamingX21 and one of his support toons (I’ll let him post it if he’d like) that gives me Field Command, Inq Seals and chaos -% rr… was hitting almost 8 million DPS in SR together, his support toon really let the skellies loose. 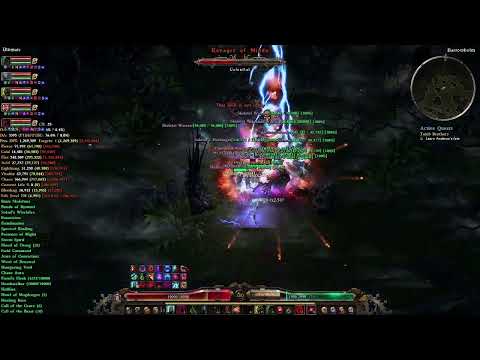 There were several times it went to the 6-7.8 million DPS, but I missed those screen captures. But, did get this nice bunch of damage here. 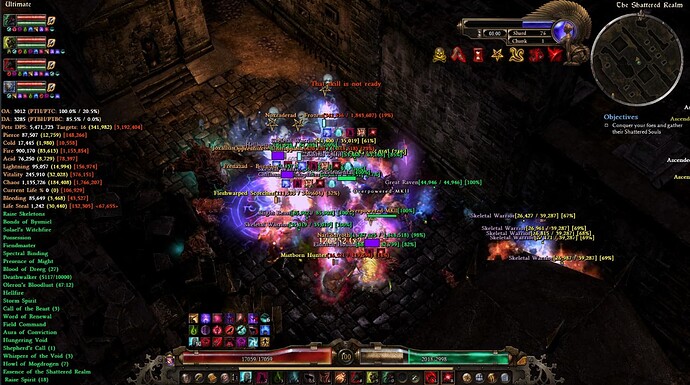 Yea ma boi I gotcha, thanks for the shootout.

@FlamingX21 thanks again for the support. 140 next. Moosie, Alex, Valdaran, Zannie in this run… we earned it. 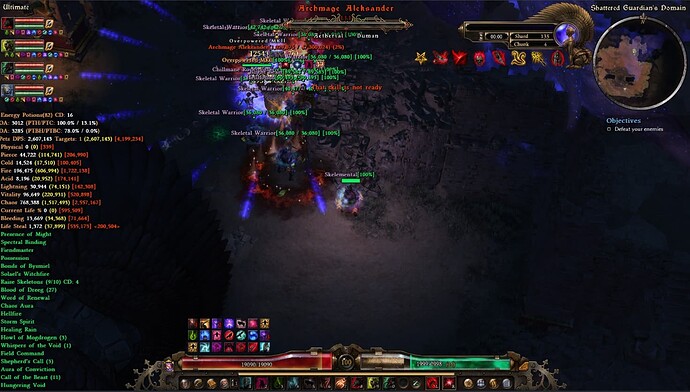 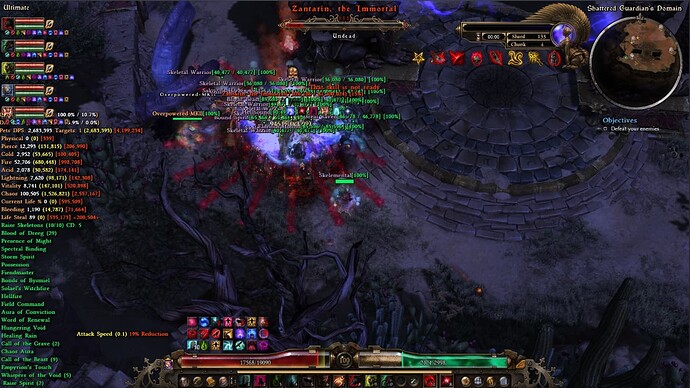 & that special shar’zul blue creature where we got rekt by it the most tbh.

Woohoo, rolled over the odometer… Chasing that DPS magic number. A couple replies above I’ve been keeping an active count of DPS bests… was going to stop once I hit 6 million, but I’m close enough to 7 that I think maybe it’d be doable. Anyway, 6.7+ million solo DPS bump. 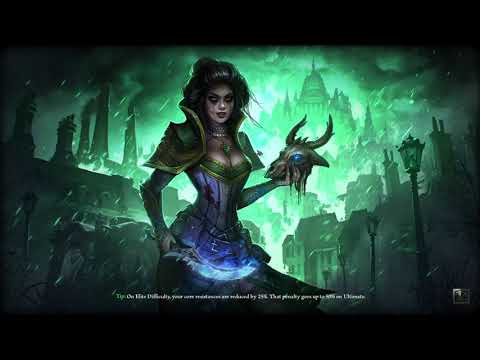 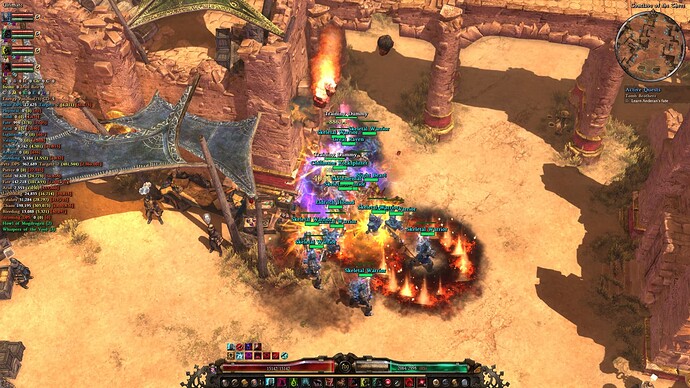 Beat SR100, was always the goal… I didn’t try too often because this build is glassy as they come, but felt like giving it a go. First try, got some good rolls in chunk 4 (Zantarin, Valdaran x2, Theo)

Valdaran didn’t know what hit him. 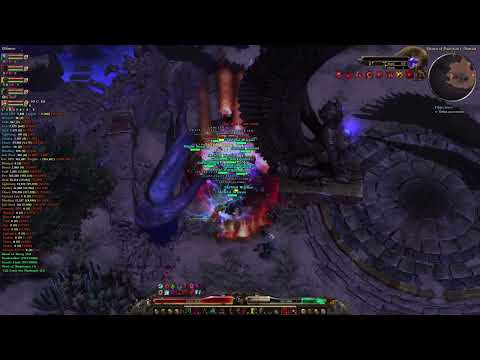 Theo’s aether was tough on the pets, but after a few deaths, bad jumps into the aether fire, I got him. Box checked, beat SR100 with this build. 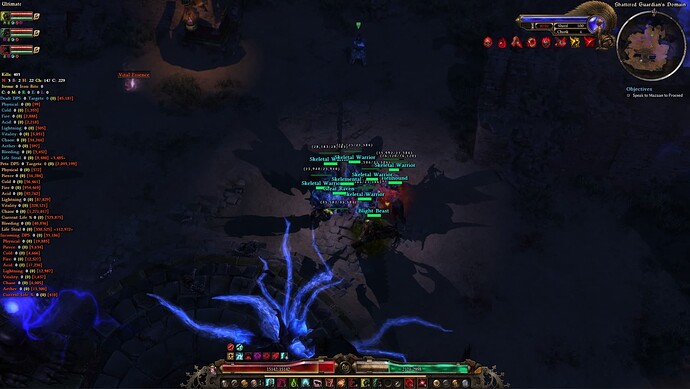 A Steam buddy that used to play GD had a nifty bleedy build that could finish SR75 with 15+ minutes on the clock… was a pretty cool site to see, watching him melt the hordes.

I’m chasing that. I’m a little glassy to take on the hordes that large, that fast… but, I can do it, and I’m getting the hang of it. Nothing special here, just a pretty good run with 13:20+ on the clock at the end… getting there. And as I said in the OP, even though this toon can beat as high as SR100, it is glassy enough that SR75 is still an adventure. 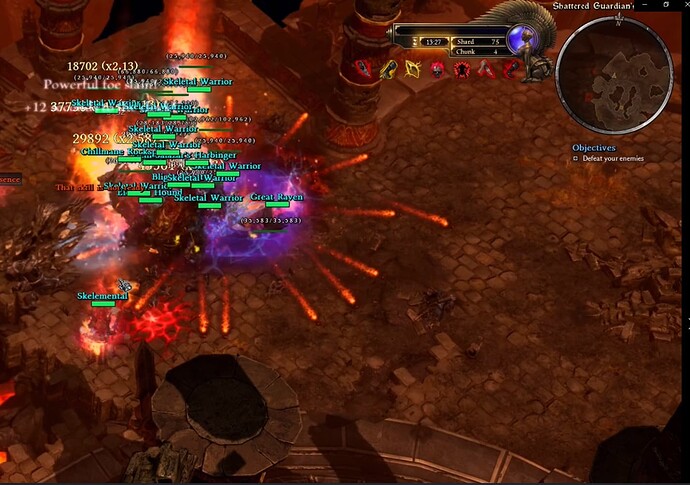 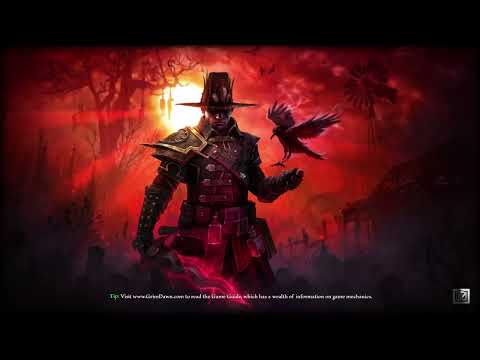 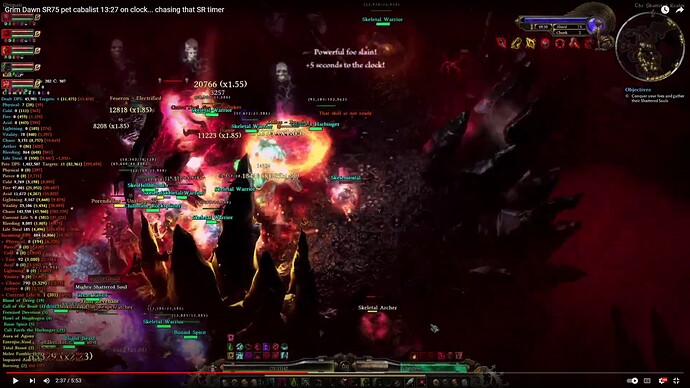 *edit - Playing with @desioner and playing with his bleedy monster build I mentioned above combined with a bunch of my angry skeletons, MP:

I would have a quick skeleton question (never tried them out myself so far):
Since you can have up to 13 or so of them:
Wouldn´t it be highly effective to bind a low CD devotion to them? Like Flame Torrent or Aetherfire?
Cause I´ve never seen such an approach so far. Is there a downside?

And yes, that does work. In most of the videos above I have flame torrent on the skeletons: Cabalist, Level 100 (GD 1.1.9.4) - Grim Dawn Build Calculator

That’s the build doing all the big numbers above, flame torrent is very likely a significant part of the damage output.

hmm less active buttons than sigatrev i will try this

This isn’t a “busy” build per se, but it isn’t lazy either. If you like offense, this is a good build for you. It isn’t perfectly balanced, but it manages to hit hard enough that it covers up for some of its deficiencies.

Did Desonier ever post his ‘bleedy monster build’? My curiosity is piqued what with bleeds seeming to be outside of the norm for pets, and, in fact, my googling only brings real old builds. Desonier seems to have remained coy about posting it whether on Reddit or here per my stalking.