updated grimtools link. Get one stun and two physical resist crafting bonuses, or 3 physical resist and put a runebound topaz into combustion band. [I’m actually running 3 armor, but that’s because my luck is awful] 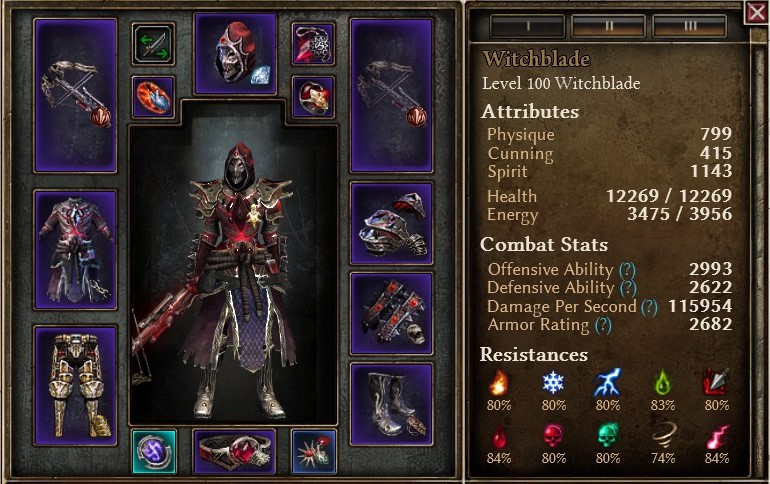 Playstyle: cast Curse of Frailty, cast doom bolt, shoot until you’re in danger, back up and repeat.

Final note: If you get a good crucible or SR clear, let me know and I can update the build. Suggestions are welcome.

Switching Inquisitor to Soldier in an otherwise well known build for questionable benefits doesn’t strike me as very original.

As for levelling it simply doesn’t work without gear. Closest you can get is DW Bloodsworn pistols and Cadence instead of Touch of Chaos.

I’d recommend creating a “controller-friendly” tag to append to such builds. Would make it easier for me to find them and link them when someone asks for builds good for controller.

First we need to define what it actually means.

For example in this build there’s Doom Bolt and I don’t think there’s a way to cast it precisely (if your main enemy is standing behind trash mob etc.). Even Forcewave is not precise with a controller (ie you cannot shoot in between two zombies not standing in a line to hit them both, you have to kill them one by one because of target lock)

First we need to define what it actually means.

I would say that if he is actually clearing SR75 on a controller with little issue then it is most likely “controller friendly”. Precision with such skills in Grim Dawn comes down more to the player understanding how to properly place themselves for best effect.

Ok but with such definition it would be hard to find builds that are not controller friendly and yet capable of SR75. Which means definition has little use.

Precision with such skills in Grim Dawn comes down more to the player understanding how to properly place themselves for best effect.

Yes I can agree with that. You definitely play differently with a controller. But it means there’s no need for a tag since you can always adjust your gameplay.

Ok but with such definition it would be hard to find builds that are not controller friendly and yet capable of SR75. Which means definition has little use.

It’s not really what I’m going for anyway. Having an easily searchable tag denoting builds a creator deems as “friendly” would be useful to me. I see such request for controller friendly builds on Steam often enough that it would certainly be handy to have a single link I could give showing them the way.

If a builds creator has played and verified a build to be able to do what they claim on controller comfortably then that’s definition enough for me.

Ok I’m fine with that.

I haven’t tested it myself yet but I made a version of this build with the Oblivion relic for smoother trash clearing: https://www.grimtools.com/calc/O2GqXz5Z

Thinking about building this a few characters in the future but I’m not sure how well it will perform.

That looks pretty good, although I’m concerned about the 0% trap resist, and the low stun resist; this build excels on the move. Overall, if you want to stand still and attack stuff, I think you’re going to be better off with a deceiver. I’m also not sure that the ~10% damage from dying god is worth the defense you’d lose in the process though, since this build hits so hard anyway.
Trash clearing isn’t so much of a problem as boss spawned trash blocking your auto attacks (and doom bolts if using a controler), and I’m not sure if the abilities from enropic coil and eldritch pact will make a big enough difference there. It’s worth trying though.

First we need to define what [controller friendly] actually means.

I’ve seen a lot of builds which either use abilities that are misereable with a controller, like AAR, or that have too many active abilities to use on a controller. With a standard xbox controller, I have 8 buttons available for skills. This build uses 5 of them, so that isn’t an issue. Doom bolt can be a problem, but with practice you can usually get it to land where you want, although sometimes you need to delay its cast, so using a controller doesn’t ruin the build.
Since pretty much every build will be weaker on a controller, I’d say a build is controller friendly if the build itself doesn’t need to be changed to be successful on a controller.

Switching Inquisitor to Soldier in an otherwise well known build for questionable benefits doesn’t strike me as very original.

I’m new to this game, so I didn’t know that the deceiver version was well known. I made this build because, after trying out a DW purifier, I wanted a ranged build that didn’t derive any strength from standing still. Anything with inquisitor is going to use inquisitor seal, and anything with demolitionist is going to use thermite mine, so with either of those kiting will always result in a loss of damage and/or defense. Being able to safely output high damage while on the move is a pretty good benefit, worth giving up a little peak damage, in my opinion.

Just an idea: use Harbinger as main weapon when doing ranged and kiting and weapon swap to Wrath of Tenebris to quickly clear trash mobs or face tank the boss. Zolhan’s technique can give you decent aoe damage with melee weapon.

I dont see any aoe damage in this build. I am missing something?

Man I can’t even do SR65 boss room with this build?

Hi may i know ur devotion route pls? Thankyou

Technically there is Zolhan’s Technique and Deciamation relic as kind of “Aoe” but yeah the build lack AoE. It was 1.1.7 build which is pretty much a year ago ( i think )

It’s available on the grimtools link (click the book near the bottom left of the screen, then click on devotion)