Pls help me. I use GrimDawn version 1.7.2. Thank you for help me 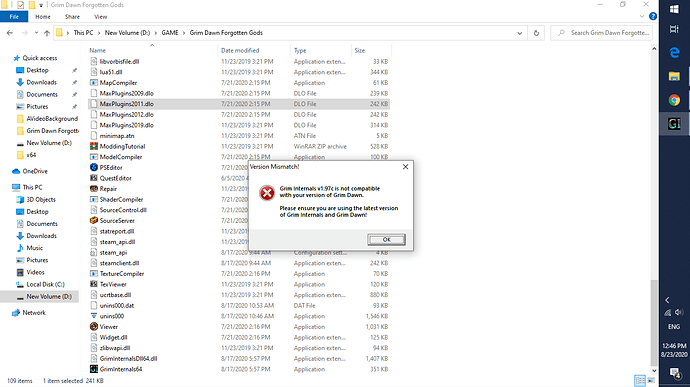 Pls help me. I use GrimDawn version 1.7.2. Thank you for help me

Don’t use a pirated copy of the game.

Looks like we need a standard template for response. This one is simple and gets my vote “Oh you have a pirated copy of game. Here’s the file you need

. May all your computer systems be full of viruses you piece of work.”

Oh, but they do. This was moved from this thread a while back.

i have the cracked version of the game and i ask for assistance on game developers right here if you dont like it dont respond on my topics. u got me ?

Just came back after a year or two of absence. Good to see some things never change…

The pirated copy discussion? Or GI per se? Welcome back!

You see, I’ve been troubled with GD performance so I was using the core-switcher tool to fix that issue.

Now since I use GI to launch the game, I no longer see a process named Grim Dawn.exe. This basically prevents the core switcher from functioning.

Is there any way one could the core switcher tool without dropping GI as launcher?
If not, could you imbue the logic of that tool (basically prohibiting GD from using default processor core aka 0th core, then enabling it for use again) into GI so that this perf issue doesn’t happen?

You need to head over to the core switcher tool by pow bam and ask them to troubleshoot their app for this issue.

But I didn’t because the issue is due to GI hiding the process for GD and not because of tool switcher? Have you used both before? If you did, you’d know why I posted here rather than at core-switcher.

I have used both before without an issue. GI doesn’t hide any processes. If you run just GI and not core switcher what do you see under task manager ?

I just captured this a while ago.

Maybe it’s the effect of launching it via steam (added GI to steam library)?process-tree.txt (10.7 KB)

It could be a steam thing. Steam seems to cause lots of challenges.
I use GOG and can see the GD exe while running GI.

How do you launch GD via GI? Do you just run GI64.exe? or do you do something more?

Edit: Has anyone else seen items disappear when using the Smuggler Stash?
If so, I will remove the GI download link until I find a solution to fix the issue.

You can forget about this part, I missed that with your mod the life and spirit potions stacks to 999, so when I SHIFT + Left Clicked on them they ended up further down on all the 100 stacks I had of them and did not realize that until recently, so SHIFT + Left Click still works as intended. Sorry about that !

On another note, in regards to my previous question about GOG launcher and the time played. Would it be possible, in some way, that when clicking on the GrimInternal exe that it would launch the game through the GOG shortcut ?? Because if starting the game through that shortcut, then the time still counts.

Now I am just guessing but the gameid should be the same for everyone that using GOG ?? I have no clue if it is possible to do that though, just curious. Although, the time played isn’t that important it would be nice to be able to see how many hours one has spent playing the game.

I have a shortcut that just calls the GI exe. The GI exe is in the same directory as the GD exe. Running the latest GI 1.97c. It fires up and calls the GD exe. GD exe is listed in task mgr. I don’t use the affinity tool anymore. Not really needed on my system. Hopefully it gets sorted for you !

I don’t see a GD.exe on my end. Instead the grim dawn application is mapped to GI64.exe for some reason.

Your running GD via Wine or something on Linux ? (based on the txt file you uploaded) ? Unfortunately I can’t say how things are supposed to show up in that environment. This is what GI in windows native will look like. I imagine is should show up similar elsewhere 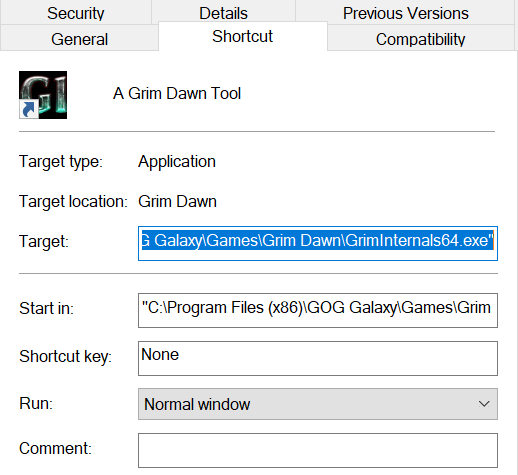 On another note, in regards to my previous question about GOG launcher and the time played. Would it be possible, in some way, that when clicking on the GrimInternal exe that it would launch the game through the GOG shortcut ?? Because if starting the game through that shortcut, then the time still counts.

I just tested it and found a solution.
So, if you click on the button just right of the ‘Play’-button, you can add an additional
executable that you can start (Manage installation > Configure).

Just add GrimInternals64.exe and start it through the new link created (in the dropdown menu).

Now the game time increase for Grim Dawn after you’ve quit the game.
At least it worked for me that way.

I don’t see a GD.exe on my end. Instead the grim dawn application is mapped to GI64.exe for some reason.

I don’t use Linux and I’m afraid I can’t help you with your issue.

Now the game time increase for Grim Dawn after you’ve quit the game.
At least it worked for me that way.

Thank you ! That solution worked for me as well, much appreciated !

Maybe add to the first post incase others that’s using GOG might want that function to work as well ?

In anycase, loving the mod, especially that one can choose to have the Item Markings for the MI with 1/2 Rare Affixes and Double Rare items since I read about those in the forum but not having had a clue how to see how is what !! I am guessing it is only for green drops and no others ?