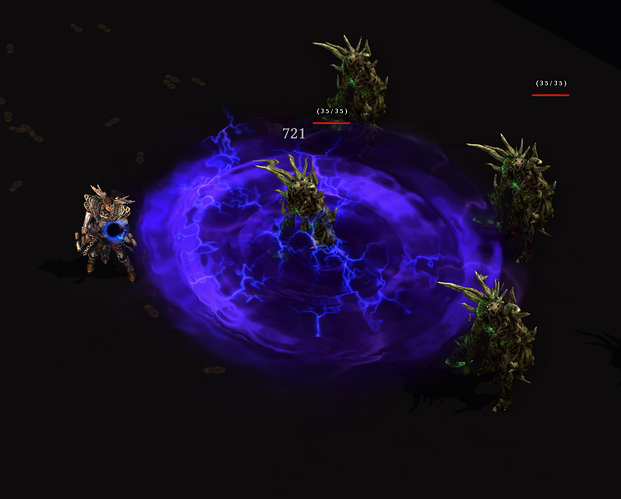 I’ve been working on variants of Beastcaller’s Pet builds for a while, first starting with Retaliation Conjurer, then Elementalist, then Physical pets Vindicator, and now Druid. I didn’t want the variants to be carbon copies of each other, only differing slightly in a slot or two, so I kept things on the down-low until I saw a build that had potential to be different. Now, with the Gate of Many Worlds item introduced in v1.1.6.0, I finally have a pet build unique enough to be worth introducing as my contribution to Fallen Gods pet builds. 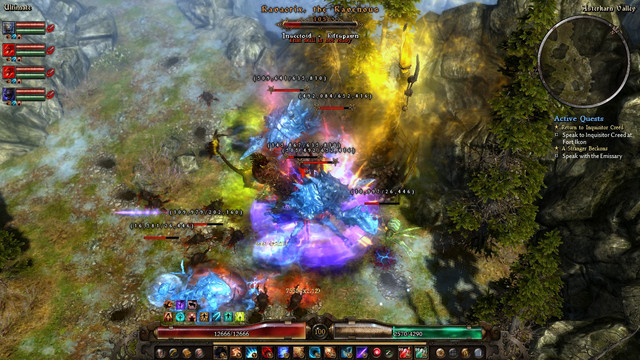 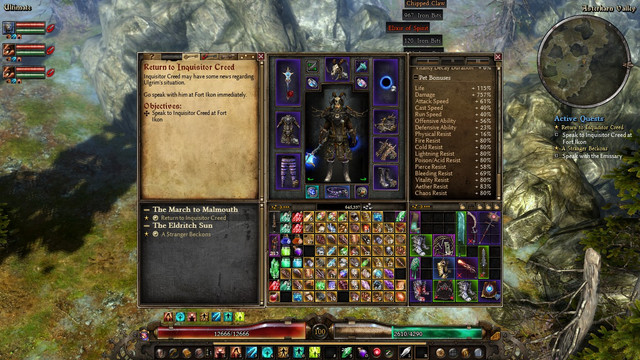 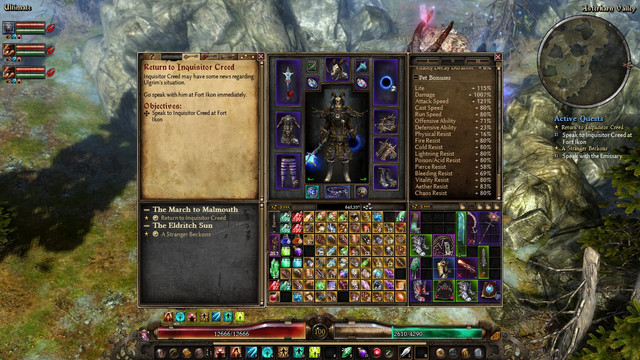 *Call of the Beast and Howl of Mogdrogen activated 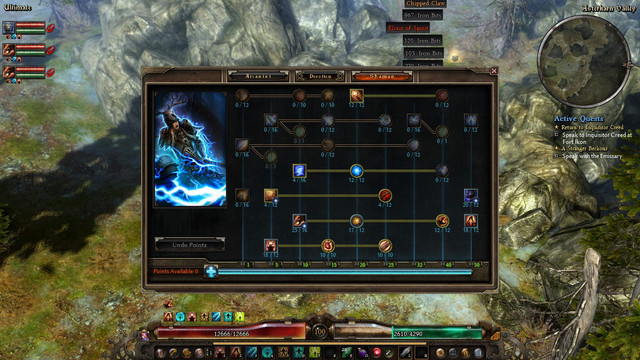 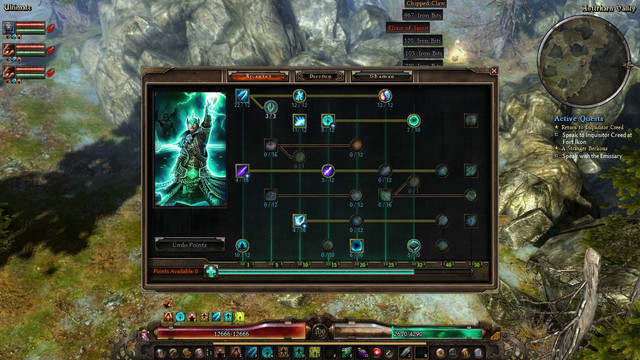 That being said, this build has the benefit of all of its equipment slots fitting very nicely with each other; especially nice with no MI’s to worry about. This is the first instance of a pet build being able to wrangle 22/12 in IEE alongside the Beastcaller’s Set, and both the weapon and the newly introduced Gate to Many Worlds providing additional modifiers to IEE. Surprisingly, most pet resistances are near the cap with only Overload providing pet resistances from the Arcanist side. Thanks to Bysmiel’s Grasp modifiers, both Briarthorn and Primal Spirit are focused on Cold damage, so the RR and devotions are focused there, but even without additional elemental RR, the additional Elemental damage adds up to hard hits not just from the major pets, but the other pets as well.

Why take Druid over Conjurer?
It is certainly possible to make a “Cold Pets” Conjurer, though I personally much prefer using Bysmiel’s Set over Beastcaller’s Set for Cold damage, especially with Mythical Crown of the Winter King’s 100% Lightning to Cold conversion that a Beastcaller’s build wouldn’t be able to use. Conjurer has the advantage of pet Health thanks to Bonds of Bysmiel, pet Speed thanks to Manipulation, and Elemental Resistance thanks to Storm Spirit; Crit damage is a wash since Conjurers can use Mogdrogen’s Blessing to provide pet Crit damage, while Druids needs Sylvarria’s Essence to provide pet Poison resistance. That being said, Druid does have multiple advantages that this build fully benefits:

I’m still learning the ins-and-outs of playing 150-170 Crucible. There’s so much ground effects and the Nemeses are so fast that I have a hard time focusing on my pets and making sure they survive. So far, in my tests, Grava and Alex have been the most bothersome, as Alex is too hard to notice in the crowd before a giant meteor falls on my head, and Grava makes my pets fumble so much DPS goes in the toilet. I know that this build will be successful in more capable hands, so I’m posting the build regardless and giving other pet-masters a shot at it.

That being said, I enjoy this build a lot because outside my core group of pets (Briarthorn, Primal Spirit, and Chillmane), this build has a very active component, summoning Webweavers and Gate to Many Worlds as quickly as you can summon them. The Gate pets are a lot of fun, as they’re invincible and have large AoE component to them that other pets don’t have. 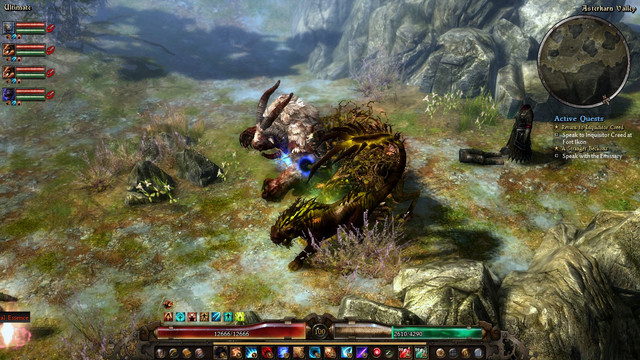 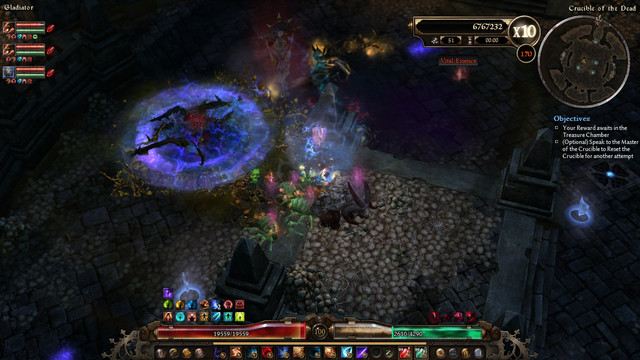 SUCCESS! [Ignore the timer - I’m still getting into the swing of things, and I may have accidentally resummoned one of my Briarthorns before Wave 160 and wiped out the Crucible buffs]

SR I’m not that interested in because the lack of buffs will expose my low Resist overcaps. That and I can’t stand the random assortment of boss rushes combined with the small boss rooms where everyone goes gangbusters even if you’re standing right at the start point.

Factors to consider:
Bysmiel’s Grasp, Mythical Beastcaller’s Cowl, and Mythical Footprints of the Grey Magi are craftable. It is preferred to craft %Armor bonuses for all three as I like to have as close to 2,000 Armor as I can get.
For Crucible of the Dead, I prefer the 3 buffs (Ulzuin’s is not necessary) + Vanguard Banner approach, as it provides a second buff to our 3 permanent pets and an additional buff to Primal Spirit and the other temporary pets. Place the Vanguard Banner on the top left, as that location allows you to gun down a Boss at Wave 154 before Kuba gets annoying, puts you on the opposite side of Mad Queen in wave 162 so you can thin down the herd a bit first, and most importantly, allows you to gun down the first wave of Karroz at Wave 167. First form of Karroz, when allowed to live long enough, uses a mind control ability that instagibs at least one of your permanent pets, regardless of how buffed they are. It’s only the first form that does this, second form can be ignored.
Make sure you Blitz Sentinel on Wave 159, as he also has a mind control ability that, while not as dangerous as Karroz, can seriously imperil your pets. Unlike Karroz, Sentinel moves fast, so you can easily guide him towards your Vanguard tower. Unfortunately, Ilgorr typically is on the other side of Sentinel, and by the time you take care of Sentinel, you’ll easily get to Wave 160 before Ilgorr’s second phase ends.
Anasteria doesn’t bother me too much, just make sure you Nullify her RR debuff before you get to Wave 170. Same with Mad Queen at wave 162, she’s on the opposite side of your banner, so I just wipe out everything else first, Nullify her aura, then finish her off.

I look this item and sees Conjurer with Bysmiel trinkets and Winter King helm. But I don’t know anything about pets ofc

I look this item and sees Conjurer with Bysmiel trinkets and Winter King helm.

That would have to be a Trinkets Familiar build then, as Beastcaller’s helm will conflict with the Winter King helm slot

Well… you could go with Chillmane instead of a second birb, but that would be weaker imo.

This is the first time since FG was released that I was able to complete 170, so let me have my achievement.

Pictures are also updated so I can upload it to the Build Compendium.