I remember quite some time ago, when Crate released a teaser image of what appeared to be a medieval town builder game. But, I never ran across anything about it since. Anyone know what’s up?

The game is probably set in an all-new world, but I thought how cool it would be if it was set in the Grim Dawn universe—trying to build your own Devil’s Crossing type town. Dealing with cultists, even striking forbidden pacts with Chthonics etc, etc.

Any more recent news or have they gone totally dark?

Medierra’s been pretty tight-lipped about it since the screenshot last Christmas. However he did say a bit about it in the 5th October stream:

kobrao :hows new project going @Medierra
Medierra :I think we’re getting close to being able to show more / announce the new game but we don’t have a website / marketing art or anything else set up… so much peripheral stuff you have to do beyond just making the game

"drazac :so is the new game a city builder, or is it a strategy with city building elements
Crank9000 :Has there been any info what genre the new game is? There was talk about some kind of RTS around year ago or so
Medierra :its a town-builder with an optional combat element

genericvillain :Is it confirmed that their new project has anything to do with grim dawn?
Medierra :new project is not related to Grim Dawn

CepheidSauron :Any new projects you guys are working this year, except for the expansion?
Medierra :“new” project, which is about 2 years old now, is a town-builder done in Unity though… then we’ll be starting something else soon" 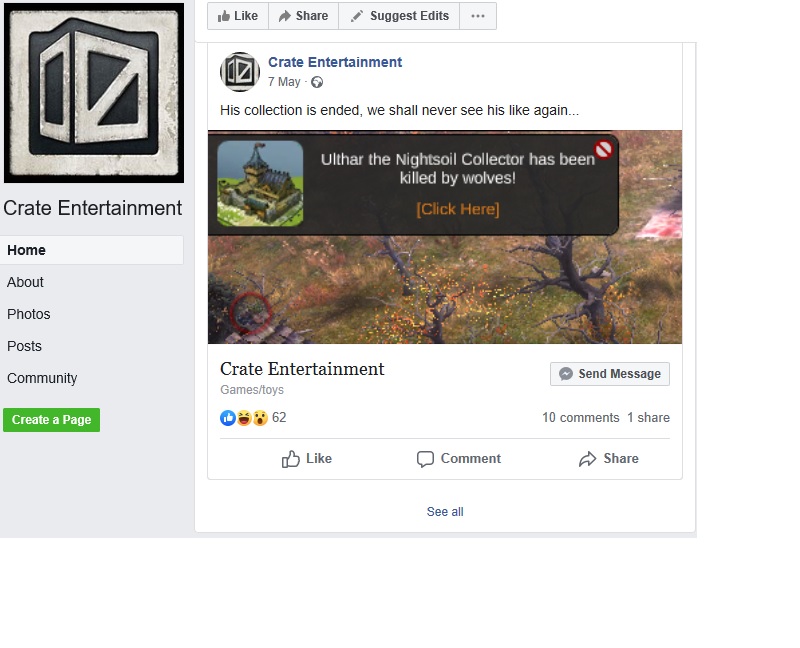 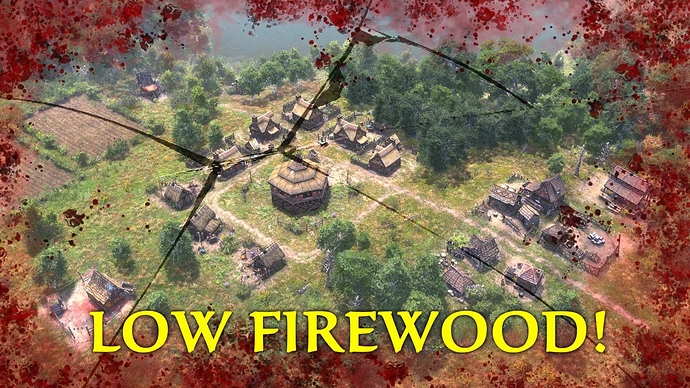 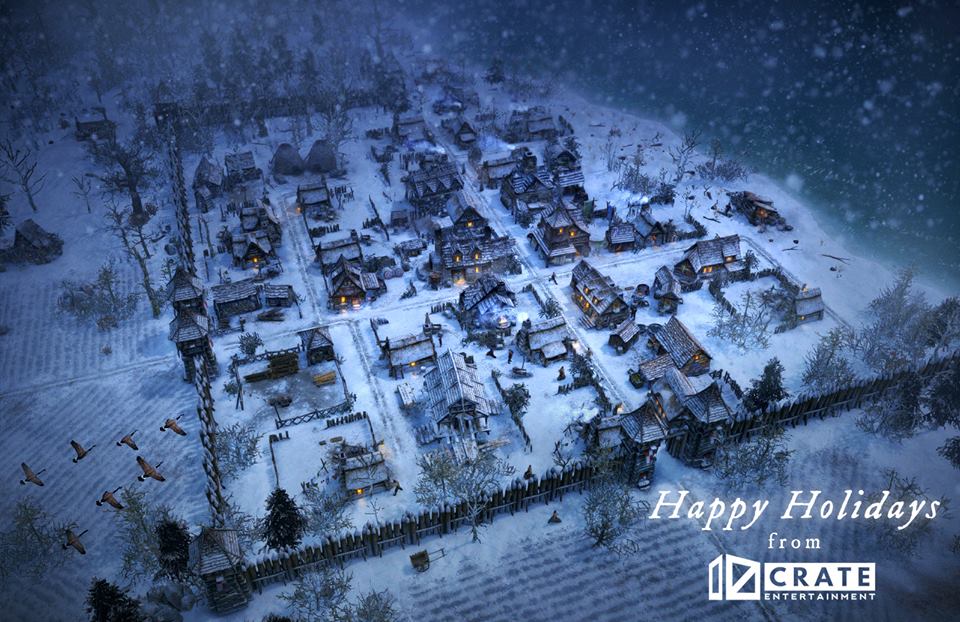 A few more comments from Zantai in the 24th May stream:

"mauric1us : does the town builder game have a name?
It has a name. I don’t think I’m allowed to tell you yet.

DarkOmeh : what year you think that the new town building will come or have more information @CrateEntertainment
Maybe I should tell you cause they’ll be forced to live up to what I tell you. But it’s probably 2020. If they release it this year. Come on guys, make 2019 happen. What’s stopping you, it’s easy. I mean Grim Dawn’s been out for years, why isn’t the town builder done?

tuftyfella : is there a match 3 element to the town builder?
No. And I will dare say officially here that it does not require a phone either.

killmame : by town builder, not sure if you can say, but can you describe what it might be like?
It’s going to involve building a town and having people in that town and having them, you know, not die every winter." 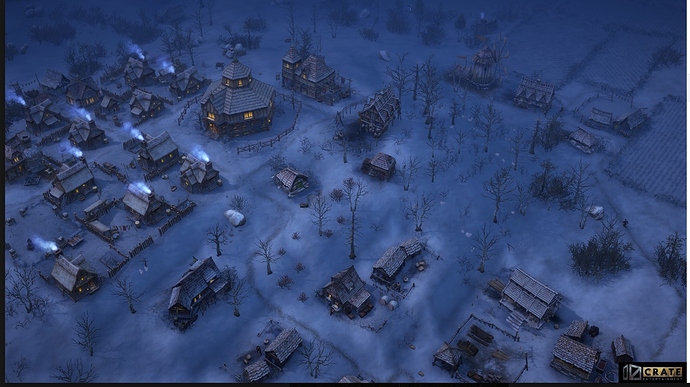 Okay, a bit more info from FB. In a reply to a question about the round building - it’s the town centre.

A little more info from the GD Facebook page

" It does include resource collection and town defense vs. “raiders”" 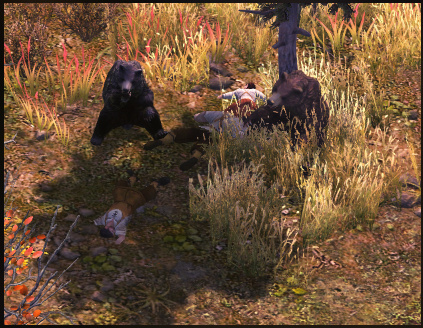 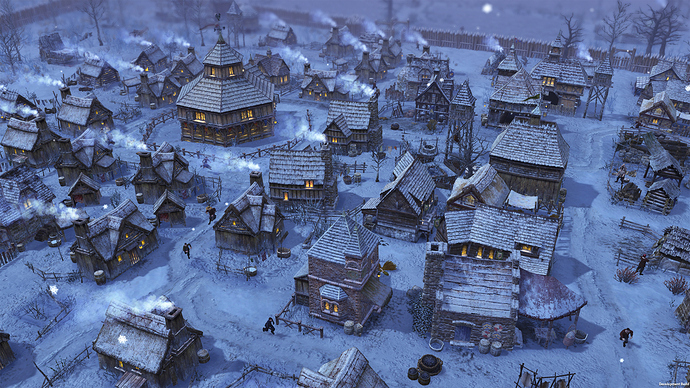 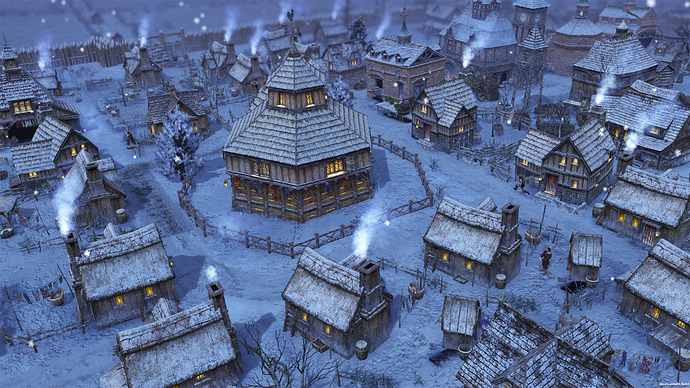 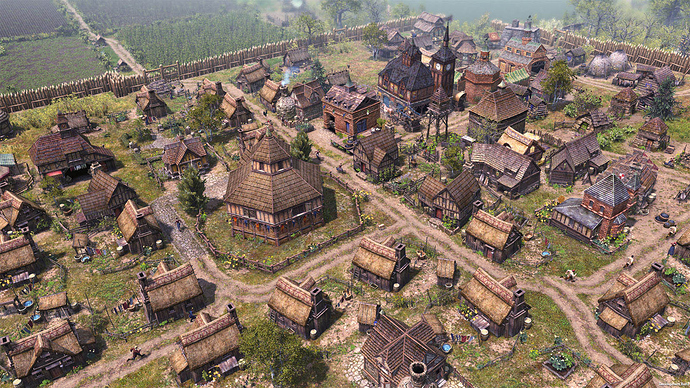 Okay, a few more bits of info from the GD Discord just now. Make of them what you will.

Zantai:
I would say it is inevitable
I’m still petitioning hard for wolves to rain from the sky

devloek:
will it have named characters/heroes that can level up, or do you send anon cannon fodder against the wolves?

Zantai:
you can name your villagers

Zantai:
how else will you get your family and friends killed off

devloek:
does one playthrough span several generations of your family or just one?

We have a NAME!

Website’s up for it too.

And a discord is being set up as we speak.

Another new screenshot for us. 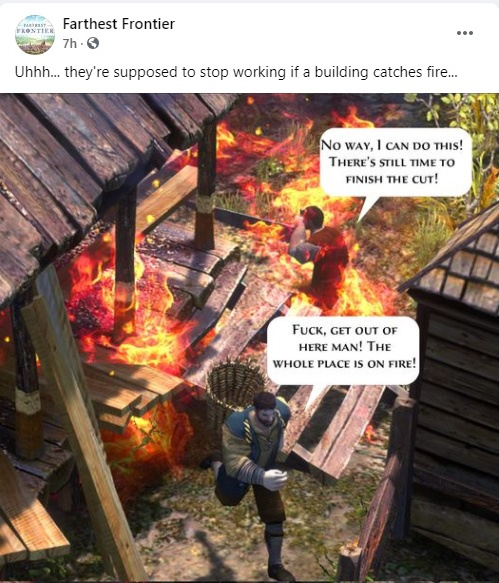 Well alright, so still no real details yet other than it isn’t related to Grim Dawn at all.

Thanks for the info roundup!

Not atm, but cross fingers he’ll be telling us more about it soon.

Considering that we have the slimmest of info on the game to date noone can say except Crate. I’m kinda thinking more Banished-like tho rather than builders focused around contemporary civilization but who knows.

Sent from my SM-G965U using Tapatalk

I hope it’s not a generic city builder… Have they mentioned the price tag?

All we know so far is what’s given above. We’re at big M’s mercy for the rest of it.

I hope it’s not a generic city builder… Have they mentioned the price tag?

They’ve only shown one screenshot and have only mentioned that it’s a city builder w/ optional combat (and built in Unity) and all of this on the ‘sly’. How are they going to mention a pricetag for a game we don’t even have a name for? They don’t even give a pricetag on GD expacs until they are almost ready to release

with Blizzard’s fail, maybe evil medieera found opportunity and has sacked the game in favor of GD2:p

snap, seriously we need some tinny update of the game now! It’s almost end of the year:p

Well, still a few things to do yet.

As to the question someone asked about the “new project” - well, part of why we haven’t shown much of it is due to team size restraints. When you announce / begin to show a game, you want to have some marketing art, a website or whatever set up so people interested can start following the game after that initial buzz… We have none of that yet. So far it’s just seemed too painful try to take someone off development to put in the time for that peripheral stuff - yet, until we do that, it doesn’t really make sense to announce / show the game.

We do need to get to it pretty soon though as it’s nigh time we announced it.

The new project is looking pretty good now though imo - so currently it’s just about getting our act together with the marketing side.

Well, still a few things to do yet.

Well, at least it sounds like they are close tho. Going off that it seems possible we may hear more of it in the coming months if they get working on a site for it.

I’m wondering how they are going to handle the forums. Most companies with multiple games have a single forum and just subsection the individual games, which is what I would prefer personally. If that ends up being the case they may have to change the address for this forum since it is tied to grimdawn.com. Might be better to tie the forum address to crateentertainment.com.

So long as whatever they go for isn’t that awful WordPress crap I’ll be happy. Why anyone thinks that’s good for forum usage I don’t know.

Also begs the question do they try for a more modern and secure version of vBulletin or similar given the chaos that we suffered when they tried for the site here or stick with v3?

Poor Medierra, decisions, decisions - when all he wants to do is make great games for us to play.

It sounds more like Settlers with the combat part. And Northgard’s success has shown you don’t need crazy budget to compete in that space.

Also begs the question do they try for a more modern and secure version of vBulletin or similar given the chaos that we suffered when they tried for the site here or stick with v3?

Well if Crate want to use/try a new version of Vbulletin I’ve got a current license I’m not using for vBulletin 5 so they are more than welcome to try it and see what they think.

From their FB page.

looks like related somehow to GD or Cairn! ? I hope so

Medierra already said no, not related to GD.

Medierra already said no, not related to GD.

you are right Gd does not have wolves but the naming scheme is so gd like:p

i hope it does not play like a mobile game:eek:

For a moment I was worried that medierra broke his [post=33155]wolf rule[/post], but then I realized it was not the wolves who were killed. relieved