One day I had a dream. In it, the aether absorbed everything: earth, sky, air, even dreams, even hopes, and there was no salvation from it.
After waking up I almost forgot this dream, but the picture is all-consuming aether stood in front of the eyes.

So I decided that my new character will be based on the aether. But which one to take? I realized that I wanted to make a melee fighter with the conversion of elemantal damage into the aether, so the choice fell on the defiler.

II. Main idea or how it works

Yes, defiler. What do you usually think of when you mention a defiler? I’m pretty sure that something like this 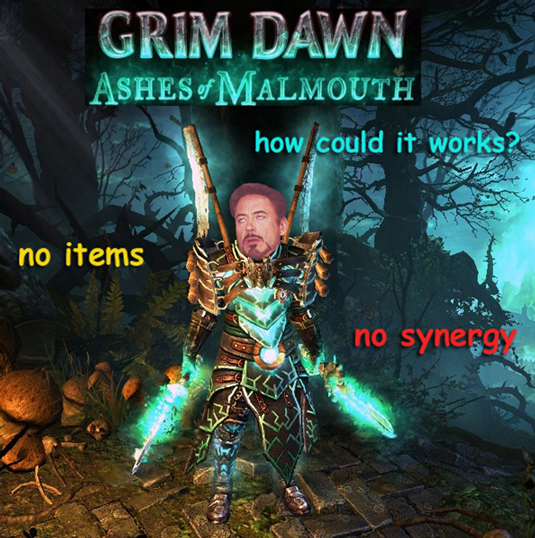 And, to tell you the truth, there is some truth here. If the necromancer’s skills are most commonly based on aether, vitality and sometimes in the cold, the demolitioist is best suited for assemblies through fire and lightning.

Yes, of course, there are a couple of things in the game with a conversion from fire to vitality (and vice versa), but it did not seem so interesting for me to develop the character.

So, we have the task to convert all the elemental damage into the aether, this can be achieved in two ways, first I went first (using two parts from diviner’s set and the Aldrich’s scepter), but this way led me to a dead end (in the deadlock there was no resistance to physical damage ). So I went the second way, using the same Aldrich’s scepter and the magelord’s set of rings - and it’s worked.

Moreover, now that the cold damage from bone wave was the damage from aether a bone wave began to work like ABB, greatly enhancing our aether for a short period of time. 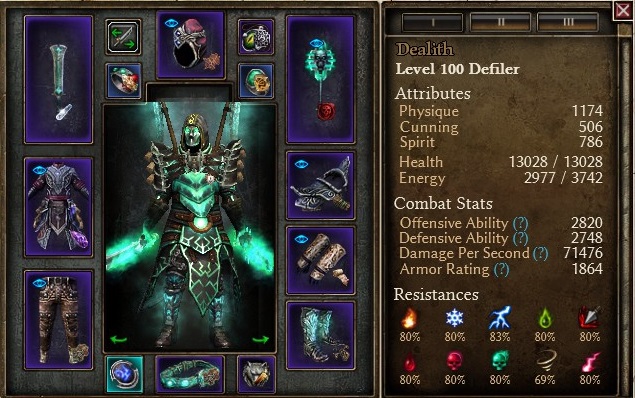 As you can see, I purposely avoided using green things in the assembly for the greatest “friendliness” of the build to people who are not ready for 100 hours to farm pants or craft shoes.

Alternative: some MI pants with chaos/stun resist, OA, AS

Rings: Magerold’s set
We need this set (with good rolls of conversion, besides) to elemental -> aether conversion.

Alternative: If you use two pierces of diviner set then you could replace this rings to Albrecht’s rings.

Amulet: Peerless Eye of Beronarth
+1 to all skill, + to crit damage.

Relic: Impurity
+1 to necromancer, nice prock (to me it deals 7-10k aether damage)

Note: Initially, I did a more aggressive build, with a Dying God (thanks to Albrecht’s rings all chaos became ether) and without the Tree of Life, but after I refused from this idea in the direction of greater “tankness” and greater survivability.

Since I don’t play crucible anymore (because the guaranteed legendary item at the end of any rougelike dungeon made their farming a much more efficient and much less stressful than the crucible) i will not make a crucible video with this build. However with crucible buffs this build could finished gladiator.

There is some video I made for this build:
Cronley’s hideout run
Alkamos
Carroz

Should you consider a Riftstone for Chaos Strike?
Terrified/Confused enemies sometimes do annoying run

your meme killed me

Nice to see you share more your builds here

With the current item support there are exactly 3-4 defiler concepts that’ll work against end game, that class combo has a serious identity crisis.

Cool build, but yes, Defiler item support is terrible. Fire -> Vitality conversion for Fire Strike from amulet and the same for a very few items, like Lifeblaze Mantle… Also, you can make a not common Aether Ritualist build with 100% conversion from Lightning -> Aether for Savagery with almost same items, except amulet and Myth Vortex of Souls:)

Should you consider a Riftstone for Chaos Strike?

I’ll tell you even more, the first version of this build was made through 2 pieces of the diviner set, so the slots under the rings were free, and I then took two Albrecht rings to convert all the chaos into the aether (of course, in the stars I took a Dying God to further increase the damage ).
And the “aether strike” is very good.

Don’t argue.
But the more interesting it is to do something interesting in conditions of limited resources. It sounds like a challenge and sharpens the mind.

but the more interesting it is to do something interesting in conditions of limited resources. It sounds like a challenge and sharpens the mind.

No arguments there, it is the reason why i enjoyed vanilla Battlemages so much as it was quite rewarding to build one

So thou made a Defiler work with conversion of elemental to aether? I’m not impressed with thee, mortal.

The great Master of Crucibles had seen many challengers using conversion in their builds, and yours isn’t even the most creative of them all, somewhere in the middle perhaps. Hence you had only deserved a rating of 5 out of 10000.

I do applaud your effort to make a Defiler build, and this one is really cool. Nice =)

It just sucks though because, as I’ve brought up in the Ideas/Feedback thread, every build that a Defiler can run, a different class combo can do better. Unfortunately, this one is no exception.

Making this a Spellbinder gives less attack speed and ADCtH, but you get waaaay more Flat Elemental to convert to Aether and +% Aether bonuses and a lot more defense while still maintaining similar OA/DA levels, along with more gear flexibility. The 55 flat Elemental modifier to Inner Focus in particular is a big “f*ck you” to the Defiler version of this build =\

Again, not saying this build is bad (because it’s not), it just sucks that Defilers are in this spot right now.

Making this a Spellbinder gives less attack speed and ADCtH, but you get waaaay more Flat Elemental to convert to Aether and +% Aether bonuses and a lot more defense while still maintaining similar OA/DA levels, along with more gear flexibility.

Yes, I had ideas about the spellbinder (in fact it was almost the first thing that came to my mind), but I did not do the assembly on its basis, because it’s too obvious.

“I rejected those answers; instead, I chose something different. I chose the impossible. I chose… Rapture Defiler” - Andrew Ryan from BioShock.

“I rejected those answers; instead, I chose something different. I chose the impossible. I chose… Rapture Defiler” - Andrew Ryan from BioShock.

Word, I can get behind that

Great build. I have been levelling up this build and am at level 81 and it is a really fun build to play. I have replaced for the moment one haunted steel with the chaos strike and the loss of life steal does not seem to affect the build so far…not sure if this will hold true in the end game content.

In 1300 hours of playing this game I have never seen the iskandra shoulders or chest so you could still spend hundreds of hours.

In 1300 hours of playing this game I have never seen the iskandra shoulders or chest so you could still spend hundreds of hours.