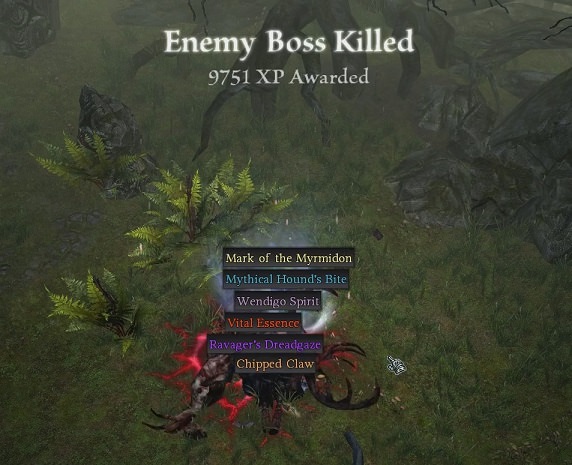 This is yet another one of those retaliator characters since it’s one of the two or three archetypes that can kill him efficiently.
Not going to be a full length guide like some of my others since there’s not that much to say that hasn’t been said before. 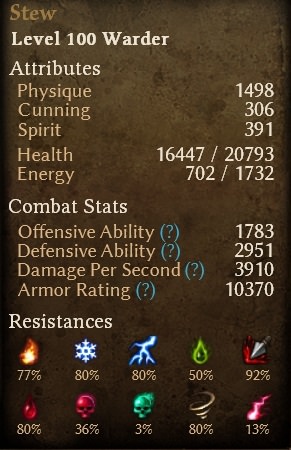 Stats with all buffs up, some don’t have 100% uptime.
Ravager of Minds deals a small amount of Elemental damage besides Phys, Flesh has Vitality and Souls has Aether, so you might want to adjust a bit for each fight.
With everything up you should have 2k+ HP regen, 8k+ damage block with 80%+ chance and 100% recovery, 24% Phys resist.

This char actually started his life as something else but he failed to perform adequately so I turned him into this. Let that be a warning to the rest of you chars.
What Warden brings to the table is:

Wendigo Totem: an extreme amount of healing
Wind Devil: RR on a char that usually has trouble getting it

This char uses 3 sets: I mixed up the Dawnguard, Dawnbreaker and Stoneguard sets to get the most phys res and flat retaliation, a bonus is that Dawnguard is very easy to get.
Note that in the videos below the char wasn’t even as finished as in the Grimtools link: I didn’t farm the Barrowholm rep for the life augments which meant I had 3k HP less than in theory, and I didn’t level the devotions since this char started with a whole other setup.

The stuff like Healing Rain, Messenger of War and Stone Form were only lv. 2-3 in the videos.
To really see the potential of the build you should max them, by doing so you will:

-have more damage since Messenger and Stone Form both provide a good chunk of it. Will probably shave off 60-90s off each run.
-have better defenses. This build was already safe but with the extra reg and absorb from them your HP bar will barely budge and it’ll mostly eliminate the need for Energy potions.

Anyway, this build can sustain the damage from any Ravager so well that it’s a near guaranteed win—there is very little danger.
The only way you can die is when you mess up your cooldowns or you fall asleep from the boredom of playing this.
He can’t chunk you like he does to some other builds since his damage is very easy to control with the amount of sustainability and defense you have.

Important: each Ravager has one or two special moves, some of them are very annoying because they drain your energy or make you fumble.
However, IF you stand extremely close to it, it will not use those moves at all!
The best way to do this is to position yourself “inside” him before you talk to him and after that you just don’t move at all.

Video demonstrations
Minds 9m
I did this one first and it also seems to have the weakest physical attacks. I tried to see if I could beat him without using potions and indeed it’s possible.
Menhir’s went off 2-3 times though but I never really felt in danger.

Souls 9m
For this one I tried to back myself against a wall to see if it would stop the pools, but it doesn’t. This one also seems to hit the hardest, I had to pot several times.
It’s also possible that he has an Aether component in his damage, I have like 3% Aether res in this setup.

Flesh ~7.5m
Here you can see how to position yourself at the beginning so he doesn’t use his blood pools.

[i]Note: I backed up my save before the big choice so I could face all 3.
Normally I don’t save scum but for this I draw the line 'cause no way in hell am I leveling this char 3 times. :rolleyes:

[/i]Anyway, I got all 3 helms now so goodbye Ravager.
This fight is not very interesting because of how one dimensional it is, I’m much more interested in the upcoming new Crucible waves.

P.S: the green ring can be anything, I just used it cause I had it lying around. You can get a better ring with RR or defensive stats.

The armor isn’t that out of the ordinary for reta builds, what makes Warden different is that totem heal that doesn’t rely on the massively crippled leech on Ravager which makes it very safe.

And the RR from Wind Devil on your primary damage type gives you better kill times.

The best way to do this is to position yourself “inside” him before you talk to him and after that you just don’t move at all.

It’s possible that fevered version can do them all as well. just not sure if it can with 3 PC Dawnguard. Gilldor chest is good. Might rey at least 2 PC Dawnguard maybe kill time will go down from 5:30 to 4:30. tHough myth open hand of mercy was nerfed so nut sure now.

tHough myth open hand of mercy was nerfed so nut sure now.

Which part of it needs a nerf tho? The riddiculous %RR or the over the top %vitality resistance :?

Nope. They already took out the flat rr off the myhtical version. It was my only source of flat rr on WB retaliator. Idk why they did it really but they did. The flat rr was redundant for most builds that used judicators, nothing OP there

Great Ravager build. But I am not leveling a super boring char just for one mob

Yeah, the ring was already nerfed by the time I made this.
Too bad, since I liked the double RR on chars where Manticore or Rhowan’s are out of reach and the values were low.

Great Ravager build. But I am not leveling a super boring char just for one mob

Same here lol, I wouldn’t play this unless you really want the helm or you like playing reta chars.
And if you’re just doing it for the helm, it’s faster to either level as a caster or just as a 2h fighting Warden.

You’re right, nice find. Thought so since he seemed to hit so much harder than the other 2. Looked those up too and they actually deal Ele and Vit damage.
It’s only a small portion of their damage though if you’re only tanking his melee attacks, so capped res isn’t absolutely mandatory like with some other bosses.

I’ll add it to the guide anyway.

Killed souls on ultimate with my aether DK, finally

it took an insane amount of minmaxing (mainly because i didn’t want to destroy my precious ugdenbloom components) and one secret ingredient:

holy shit is that relic powerful, especially with hourglass

i overcapped bleed & aether by like 50 which I think helped but i think it was mostly the relic, check it out it’s insane.

Yeah, some of the low level relics are really good.
A fav of mine is that Zeal, I think the damage stats and procs on it are very powerful if you’re not close to the AS cap.

Was hoping to see a Mythical relic with similar stats in AoM. No +mastery but just pure damage boosts. Hope we’ll get something like that down the line.

This is an amazing work done, gratz on the achievement.