Ladies and gentlemen, I present to your attention a unique build!

If you have already complete everything that you wanted and have nothing to do, if you have unlimited time on the farm components, or if you just want to meditate during the game, this build is for you.

Stock up on popcorn and enjoy: 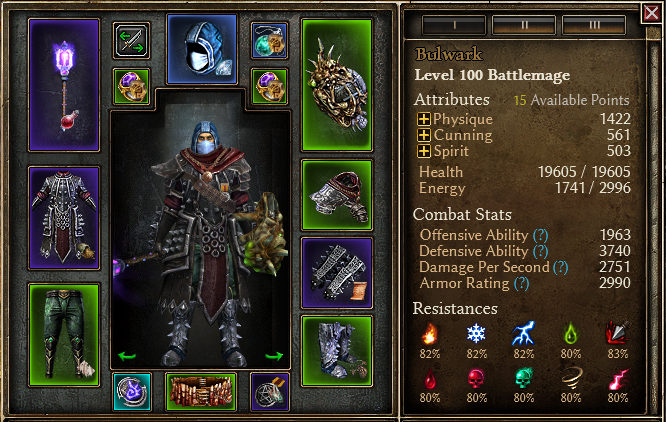 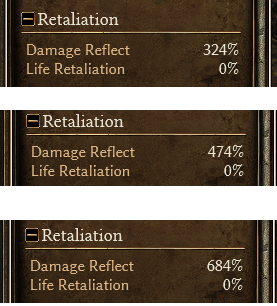 The concept of this build is not new and is found in other games. Build implies a reflection of the damage that was caused to the player.

Pros:
All damage is reflected, including Reductions and CC.
Reflection takes place for all attacks: melee, ranges and spells
Reflection applies even when dodging/deflecting and miss due to high DA
You do not need make this build itself, because I have already done it
If you get bored you can always respect it

Cons:
Mobs most often have high resists to their own damage.
The damage of mobs is not commensurate with health, therefore it is impossible to collect reflections sufficient for an effective game.
The number of sources of reflection limits the variability of the build.
Hard to get BoS gear

Leveling as you want, and to 94 respecs under the build. But if you want to experience the gameplay, completely collect objects with a reflector: weapons with of elements suffix, accessories with Incorruptible or Lich’s prefixes, Shields with of Valor suffix.

In the end, we have as many as 10 build determinating items, 4 of it are Rare.

Head: Empowered Maiven’s Hood - Has the largest % Reflect. Component - Prismatic Diamond, Unique on the reflect for Helms
Necklace: Empowered Essence of Beronath - The Only Amulet with Reflect
Torso: Mythical Armor of Azragor - the only torso with Reflect
Medal: Mythical mark of Forbidden - the only medal with Reflect
Relic: Citadel - The Only Relic with Reflect
Weapon: Mythical Spelldrinker - The only weapon on the Reflect - activated buff (presumably in 1070 will be changed)
Hands: Mythical Colossal Grasp - the highest DA bonus and modifier for the overguard

Rares and MI:
Rings: Lich’s Prefix - has a maximum Reflect. Alternative - Incorruptibe is a smaller reflex.
Belt: Wendigo Warder Girdle (+3 Shield Training), Incorruptibe Prefix - the only one on the Reflect. Alternative - Devil’s Girdle
Shield: Colossal Bulwark (+2 overguard and modifier for -2 seconds) Suffix of Valor - has a maximum Reflect. The Mark of Myrmydon component is the only with Reflect component.
Shoulders: Iron’s Maiden Mantle (+3 War Cry, +3 Maiven’s Sphere) Affixes are optional
Feet: Reaper’s Leggins (+3 Field Command) Affixes are optional (I haven’t found any good ones)
Boots: Stoneplate Graves (Just because the best) Affixes are optional

Gameplay
If you still think that Reflector even no need press buttons you are mistaken.
In fact, the whole gameplay comes down to running around to the heroes and bosses ignoring all trash unless it blocks the way. A high DA (3700) gives a 60% chance of hitting for most enemies, and the incoming damage is reduced to 86%. In addition, the combination of Menhir’s Bulvark and Maiven’s Sphere gives 31% damage absorption. The Overgard modifier with CDR will allow you to be constantly be under Overguard buff. The character is still mortal, but these are the only enemies of which you just don’t need to facetanking.

It is worth noting the combination of War Cry + Shield Wall (Targo the Builder). War Cry taunt tagrets, reduces their damage and Physical Resist, while the Wall of Shields buffs your defense and gives an additional % Reflection which fully compensates for the damage reduction.

Yes, the build doesn’t work out to be completely reflective: a some amount of Retaliation damage is persist and melee attacks almost double the kill rate.

The only boss (three) at the moment which can not be killed with the current build is the Council of Valbury. Reflect is not enough to have time to kill them before proc for healing with low HP.

Nemesis and Super Boss
I don’t have a reputation for Nemesis yet
I have not tried Avatar, but most likely it can not be killed because of the high regen.
I haven’t tried the Bourbon Clones.
I tried Ravager the Flesh and he manages to kill me after a long enough battle.
I have not tried Lokkar

Crucible
Are you crazy trying to beat Crucible with Reflector?
Well, Build passes 170 Aspirant and at least 160 Recruit. I have not tried Gladiator.
At 161 wave of the Recruit, Alexander spawns with a company of aetherial heroes who heal themselves, as a result of which the wave may turn out to be impassable.

Video
Yes, I was not too lazy to record video
Part 1:

Summary
Build interesting, but useless. But like other non-standard builds, it allows you to look at building from a different angle. Some ideas can be borrowed when building hybrid builds.

Morality? There is no it

Good luck on the spaces of Cairn and do not beat your head against the reflection!

I thought I found a way to enter

That’s exact one I need after endless Crucible runs. Love it.

It would also be pretty funny if you tried to record a video then you fell asleep at the middle lol.

Nice to see this build here.